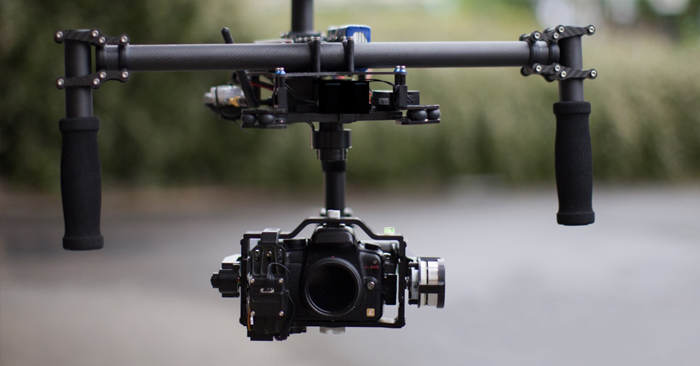 When Freefly Cinema announced the Movi just a year and a half ago, filmmakers everywhere rejoiced. But now that it’s been out in the field for a while (along with dozens of knock offs), many shooters are finding it to be more of a speciality item.

[Above image from Copter99]

I have been fortunate to have used the Movi a number of times (as well as several other gimbal based stabilizers), and I’ve been able to achieve fantastic results with it – even with no formal training whatsoever. It’s an incredibly innovative product and one of the most powerful tools that we as filmmakers have access to today, but I am not alone in feeling that Gimbal based stabilizers aren’t always the best stabilization choice.

When the first promo videos of the Movi were released last year, it truly seemed that this device could do it all. It could theoretically be used to replace just about any type of stabilization system – from a tripod to a jib and everything in between. In many respects, it can replace a lot of traditional stabilization systems…but that doesn’t mean that it’s always better suited than it’s more traditional counterparts.

They Can Only Be Held For So Long

Before I ever actually operated a Movi myself, I had not even considered the fact that since the system isn’t attached to any sort of vest (like a Steadicam) it can become extremely tiresome to hold. This is especially true when you have a heavier camera such as a RED Epic set up on it. For those of you that have never operated a Movi yourself, imagine holding out your arms straight for ten minutes… It would get pretty tiring right? Now imagine adding 10 to 20 lbs of weight to the equation and things get even more difficult.

I can tell you from personal experience that on any professional set that I’ve been on (where we’ve had a Movi or Ronin and a substantial camera setup on it), our operator was unable to successfully hold the setup for more than a few minutes at a time. This severely limits the way that the device can be used as it doesn’t allow for long takes and requires more time in between takes for the operator to recover. The solution to this problem is to rig the stabilizer up to an Easy Rig (which takes a lot of the weight off of your arms), but then the movement of the Movi is limited heavily and the purpose of having a gimbal based stabilizer is largely diminished.

Many filmmakers were excited that the Movi would free us up creatively. If we wanted to try out a completely new type of shot that was never possible before, now the Movi would allow us to get there. That certainly is still true, and I am by no means opposed to the Movi as there are certain cicrumstances where it works beautifully. However, when considering the notion that it frees you up creatively, you also need to consider that it restricts you in other ways – namely crew requirements.

In order to really operate a Movi properly you need at least two specific crew members, and potentially three at times. There is the Movi operator, the focus puller, and potentially a third crew member who is responsible for panning and tilting the device via a remote control (if you don’t choose to use it in single operator mode). This means that even though from a technical level it may be possible to accomplish the shot that you’re after, you may now need to hire a couple more crew members to make that happen. And while the same argument can be made about other stabilization systems that require additional crew members (such as a dolly grip for a traditional dolly), the specific crew members you need for Movi operation is often more specifically skilled.

They Can Be Overused Easily

Many productions that make use of a Movi fall into the dangerous trap of overusing it simply because they can. Much like shooting handheld, working with any gimbal based stabilizer doesn’t always challenge you to get the most purposeful shots, as you could theoretically leave the camera on it for your entire shoot and make every last shot a Movi shot – even if that’s not what’s best for the scene or sequence. In some rare cases, shooting an entire project on a Movi actually could be a good thing. For instance, maybe you’re shooting something that calls for a very specific and fluid movement throughout, and the Movi is the best tool for it. I would argue though, that more often than not if it’s used from A to Z on an entire shoot, the unique effect of the camera movement can get lost due to overuse.

When you need to spend time setting up a dolly or a steadicam, you have no choice but to be especially careful about the choices that you are making. We all know the effects of camera movement on the viewers interpretation of a film, which is why it is so important for those movements to be purposeful. A great film will often make use of many types of camera movement in order to evoke different emotions, and unfortunately when using the Movi it is fairly common to fall into the trap of shooting everything that way, and losing sight of some of the more traditional methods of making a film. That doesn’t mean it has to happen, but simply that it can.

After reading this article you might think that I’m not a fan of the Movi, but that really couldn’t be farther from the truth. I love what Freefly has done and truly believe that gimbal based stabilizers are the future of stabilization in many respects. With that said, there is still a time and a place for them to be used and they aren’t always the best solution – nor is any stabilization system for that matter. If you are shooting on a larger scale production and can afford a couple of crew members that are dedicated to operating/controlling the Movi, then you are in a good place, especially when you know when and where to use it. Just make sure that whenever you make use of a Movi, it is the right choice for your story.