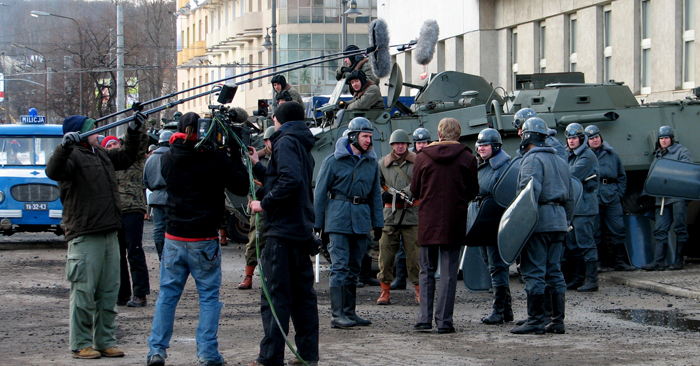 5 Tips For Getting Great Film/Video Locations For Free

Skimping on location can leave your film feeling amateurish and cheap. Here’s how you can get A-list locations for next to nothing!

[Above image from StarScream on Wikicommons]

Production value is one of the most important elements during my filmmaking process, as having a film that looks high-end not only helps to connect with the viewers more effectively, but also keeps the perceived value of the project higher. This is key when it comes time to sell or license the film.

Filmmakers today clearly understand the importance of production value, which is why the Internet just about explodes every time a new camera is released…but ironically there is such little emphasis often placed on the locations and in my opinion, it really shows. Personally, I would rather shoot a film on a less capable camera but use incredible locations. So if you’re like me, and understand the importance of production value – read on to hear my tips for getting great locations on a budget.

Don’t Be Afraid to Ask

No matter what you’re shooting, chances are some (if not all) of the locations may be available to you through friends and family. You need to be careful about going down this road, as you don’t want to simply use locations out of convenience. After all your best friend’s apartment might not look like the luxury condo that you wrote into your script. But when there is a location that you need, and that a friend or family member has access to – then ask! The worst thing that will happen is that they say no, but in a best case scenario you just landed a killer location for free. And remember to never take advantage of the situation. Giving them a credit on the film, or taking them out for dinner can go a long way, so always pay it forward.

In a lot of shooting scenarios, you can likely offer a product placement (or credit) to a location or business that may be willing to help. For example, if you need to shoot in that luxury condo I mentioned above, you might be able to contact real estate developers or agents that will let you shoot in one of their properties in exchange for a credit on your film. If your film is in any way substantial, you truly will be doing them a favor as well, so try to think outside the box and think of what businesses or business owners might be willing to help in exchange for easy publicity.

For exterior locations, permits are always the biggest hurdle, as many public areas can cost thousands of dollars a day to shoot in. The good news (and something that I only learned a couple years back) is that there are actually loads of areas that don’t charge for film permits.

When I shot my first feature for example, I had my heart set on some locations in a rural town that would have looked incredible for the context of my story. After looking into it and initially becoming discouraged as a result of the high permit fees, I realized there was another option. Just down the road was the county line, and if I was able to just shift the location a few streets over I could avoid having to pay for permits entirely. This is something that you really need to look into, as you would probably be surprised to learn that a lot of fantastic locations can be had for nothing at all. You will still need production insurance in order to get the free permit, but if you do your homework you might just score some amazing exteriors for free.

I’ve shot a lot of my work guerrilla style (meaning with no permits) as sometimes you just have no other option. While some areas offer free permits, there will be times that you want to shoot in a very specific location and there is no free option that you can sub out for it. In these situations you might want to consider shooting guerrilla style. In a lot of cases, scenes can be reworked to avoid overly complex setups or heavy dialogue. If you’re in a tough situation, consider trimming your scene down a bit and getting some high production value shots by going guerilla. Just be sure that if you cut any important moments out of those scenes (in order to achieve them more easily without a permit), that you work them back into the script somewhere else.

Also, proceed with caution as shooting guerrilla style can lead you to get your gear and footage confiscated, and you can also get fined. So be careful and be ready to deal with the consequences if they arise. Shoot ‘guerilla style’ at your own risk!

Shoot Out of Town

I would bet that a lot of you that are reading this live in LA, New York or another major city. Pretty much every major city (especially LA and NYC) are very in the know about film productions, and as such it is much harder to shoot in a metropolis. In major cities so many of the people that you will talk to about shooting (business owners, home owners, etc.) have already been through the ringer, and in some cases got burned. So they are unlikely to let you do it, unless you’re paying them the big bucks. For these reasons, shooting out of town could be a really great option, especially on a feature or any other project that requires loads of different locations. In smaller cities and towns, people are generally far more open to filmmakers as they see it as something exciting and fun, as opposed to a possible threat to their property.