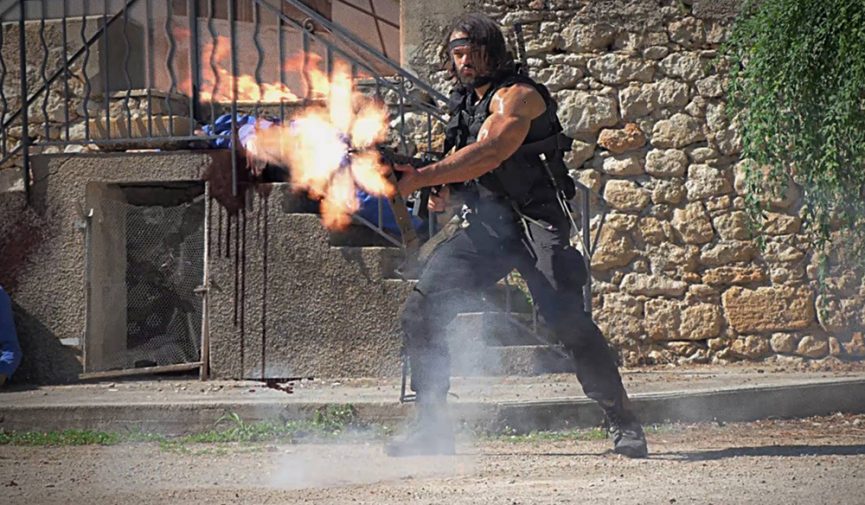 All images via Benjamin Combes.

Benjamin Combes is not the first man to try to make a classic action movie. Many have tried (most notably, during the 1980s and ’90s when the genre was a hot box office draw). We’ve also seen other retro synthwave projects like Kung Fury. However, Combes’s own project, Commando Ninja, has been in the works for a while and is now coming to light.

Combes, who has worked in film and video for several years as a director in Montpellier, France, has honed his chops producing trailers and projects in the video game industry for brands like Assassin’s Creed, Tom Clancy, and Mario. We chatted with Combes about his newest project and what advice he has for anyone looking to create retro ’80s action. 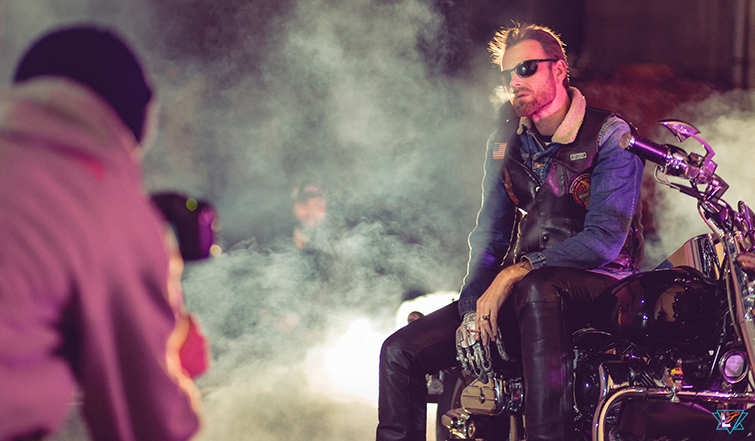 To start this project, I went back and re-watched every ’80s action movie I could remember. What stood out was that the action was always very clear and you could always understand what was happening on-screen. Stunt work and choreography was key as the camera was almost always stable on a tripod with minimal dolly movements.

First off, when diving into an homage project, it’s highly important that you do your research. When looking through source materials, Combes developed a game plan based on what his filmmaking predecessors had to work with. Camera moves in that era were an unnecessary luxury, as the filmmakers would rather let the stunts provide the entertainment.

2. Use Real Locations (not Green Screens) 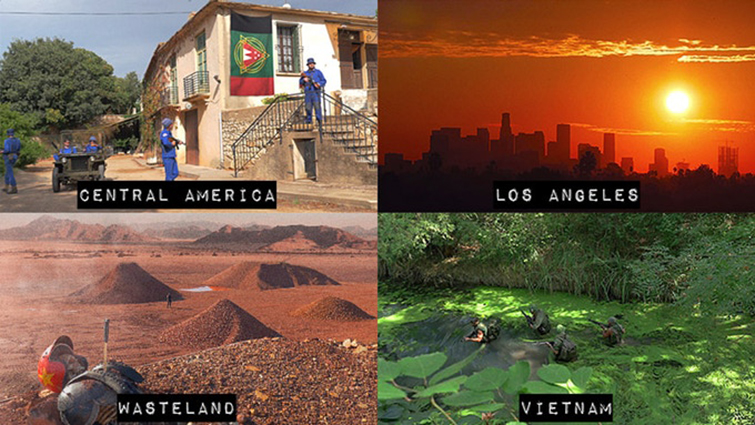 Like I said above, our goal on this project was to shoot a movie as it could have been done in the 1980s. Green screen keying is a great way to digitally extend locations, but I really don’t like the idea of actors playing ‘make believe’ in a studio. I found that the actors were really more enthusiastic being on location and actually getting to roam around in riverbeds than safe in studio.

As Combes points out, green screen technology is truly a powerful tool for filmmaking projects both big and small. Kung Fury, for example, made heavy use of green screens and CGI to create a digital world. However, each project needs to find its own authenticity, and Combes’s dedication to ’80s technology rules comes through true to form.

3. Work with Era-Specific SFX on Set

For me, real squibs is a huge detail that always stood out to me from the classic ’80s movies. We were able to hire some professional stuntmen who could handle things like squibs, grenade explosions, and swordfights. We also made an effort to use awful-looking dummies and fake body parts as they would in the ’80s for any stunts where people are exploded or thrown from balconies. Likewise, real locations [and] practical SFX were also the best part of the shooting days, and actors loved that. I remember actor Philippe Allier was particularly excited to be chased by a full-scale velociraptor.

On small-budget productions (Commando Ninja was principally shot with less than $5,000 — its Kickstarter is trying to raise the rest of the necessary funds), working with real SFX can get expensive quickly. However, because Combes and his team embraced the cheesier aspects of ’80s action, they could sacrifice verisimilitude for safety — which is always important for explosive shoots.

4. Get that Film Look

If you want to look like an ’80s movie, the film look is maybe the most important thing. We shot digital on a Panasonic GH4, so we tried to set everything we could to match film quality. Of course that means thinking about lighting, depth of field, focal length, focus, and shooting at 24fps [with] shutter speed [at] 1/48 to get the right motion blur.

As you can see in the picture of their color grade, Combes used the GH4’s “Native Cinelike D” before trying to match color grades by taking shot-for-shot references from some of his favorite ’80s classics. Then the filmmakers added grain and dust overlays and created some organic pops and scratches to create a unique blend for the end result.

Here are some great grain overlays from Rocketstock to consider for your ’80s projects. 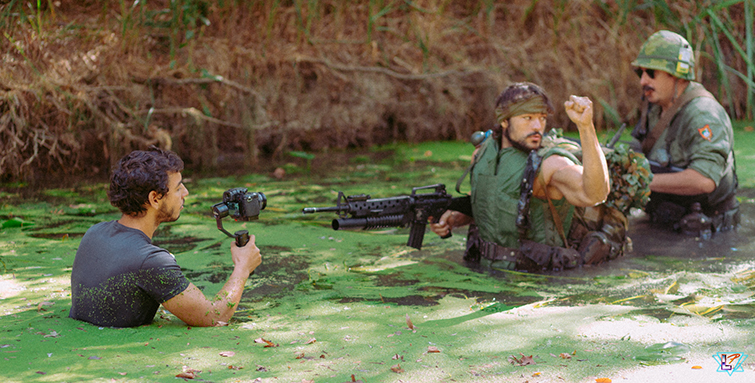 I think details in movies are really important. I love making costumes, and I’m kind of a gun freak, so we paid attention to use only ’80s props, costumes, weapons, haircuts, and vehicles. I spent a lot of time on eBay and in vintage clothing shops to find the pieces for the costumes, contacted a lot of old vehicle owners, and verified if props were from the [right] era.

Some folks can just be sticklers for the details. In Combes’s case, that meant caring about every little thing — from the shoes on his actors’ feet to their standard army haircuts to every detail of their props and costumes. If you’re trying to recreate a world gone by, you have to truly inhabit it.

6. Embrace Humor in Your Action 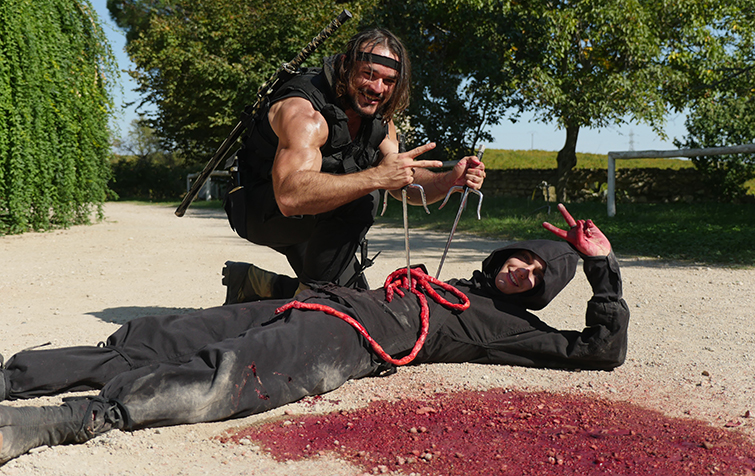 ’80s action movies were violent, sexy, and (most of all) fun! Commando, Lethal Weapon, Die Hard, and RoboCop were all ’80s blockbusters that embraced a sense of humor. It’s a great way to defuse all the violence you sometimes witness with funny punchlines and tongue-in-cheek dialogue to help detach and enjoy all the blood and gore.

Let’s face it: any retro ’80s action movie made today is going to get a few laughs. Combes, like those before him, has embraced the humor in the action by calling attention to over-the-top elements and tropes. It’s no coincidence either, as Combes points out (after reading Arnold Schwarzenegger’s biography Total Recall) that comedy writers were often brought in to punch up one-liners.

When you think of the ’80s, you think of neons and pastel colors like pink. Action movies from the ’80s were no different, and we worked hard to bring retro lighting setups to life. Of course, we didn’t want to abuse it, but we tried to bring back some nostalgia with colored gels for dark and night scenes and bright neons when we could.

Today, it seems the trend in cinematic lighting is a heavy mix of orange and blue — and finding creative ways to use darkness and shadows. In the ’80s, shadows were big, but bright colors and neons were also popular. Combes admits that he was very lucky to work with a retro-style photographer for lighting setups and gel choices to get a look that was both ’80s and practical.

For more info on Commando Ninja check out their Kickstarter here. For more retro filmmaking tips and tricks, check out these resources.