It’s been less than three months since Apple released Final Cut Pro X, and from the onset, there have been many heated reviews from professional editors worldwide—mostly for FCP X’s missing features and lack of backwards compatibility.  As a result of this dramatic backlash, both Adobe and Avid took aggressive measures to lure editors to their respective software packages.  And this week, news coming from this week’s IBC Conference in Amsterdam is showing that both Adobe and Avid are pleased with their software sales following the FCP X release.

Adobe posts 45 percent growth for its video creation tools on the Mac, driven in part by editors switching from Final Cut Pro

Adobe announced that the “demand for Adobe’s video content creation tools has exploded,” producing a 22 percent growth in its video editing software across all platforms, year-on-year.  The big news, though is on the Mac side, where sales have seen a 45 percent spike.  Adobe affirmed that much of the reason for this Mac-specific growth is because of the large number of Final Cut Pro X users switching to Premiere Pro.

Adobe’s recent campaign, driven by the motto, “You’re a pro.  Make sure your toolset is too,” has been sweeping the industry, and has made it easy for people to convert with its 50% slash in cost to make the switch.

Avid is also satisfied with their success, but offers less definite figures of sales.

Avid also cut the price for people switching from Final Cut Pro to Media Composer by roughly 60% (to $995), which has given the company a lot to be happy about. 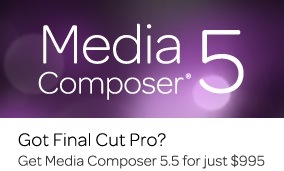 “While we can’t comment on specific sales numbers, we have been very pleased with the response to our Final Cut Pro Crossgrade promotion,” says Angus Mackay, Segment Marketing Manager at Avid.  [We are pleased at] the enthusiasm from our customers who are experiencing our latest product innovations like PhraseFind, which help them to dramatically accelerate workflows in news and unscripted production.”