Today Apple released their first update to Final Cut Pro X (10.0.1), making good on several features that were missing from the initial release. 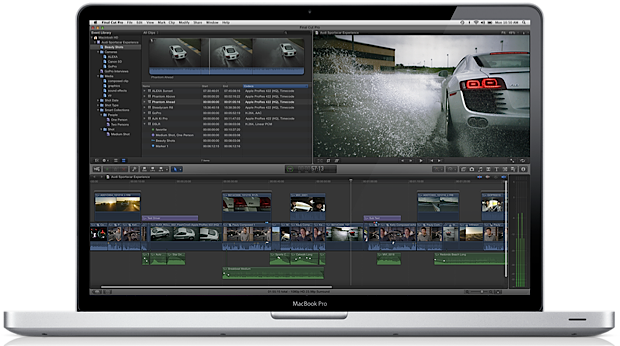 IMPORT/EXPORT XMLs
This is one of the most requested features that was left out of the intial release.  This is huge for a few reasons…

Third part applications now will be able to access and support FCPX project information. Opens up the flood gates for bringing your FCPX projects into support application’s such as DaVinci Resolve.  But perhaps most signficantly, XML support means you should be able to bring in FCP 7 projects into FCPX as well (a huge request of pro users).  By exporting an XML version of your FCP7 project, it should now open up without problem in FCPX.  UPDATE: FCP 7 cannot write to this new XML — and therefore you are still unable to export legacy projects into FCPX.

Digital Rebellion has more info on the new FCPX XML format and what it means in regards to working in concert with other applications.

INTRODUCTION OF ROLES
FCPX’s magnetic timeline, although beneficial in some aspects, made it difficult to logically stack your FCPX project timeline.  Many pro editors keep their projects organized with all similar media residing on the same tracks (ex, defined tracks for sound effects, music, dialogue, etc).  Having defined tracks made it easy to export stems (exporting just one type of media element from your project – just music, just dialogue, etc).  FCP 10.0.1 introduces “Roles” — assign each type of media a “role” when you bring it into your project/event (music, sound effects, etc).  Now you can choose to just export one role from your project at a time— a new way of creating stems.

For more information check out post production veteran Philip Hodgett’s article on why FCPX roles are superior to FCP tracks.

30 DAY FREE TRIAL
Give FCPX a test drive risk free – fully functioning 30 day trial.  Once the trial expires you can pick up where you left off (all projects remain intact) by purchasing the application.  A great opportunity to see if FCPX is the switch you want to make!

XSAN INTEGRATION
Work on multiple machines and store footage/media remotely.  This is a big requirement for post houses and post-environments that require editors to be working on the same storage device (XSan) simultaneously.  Will be interesting to see if Apple introduces some Final Cut Server elements in future updates now that XSan support has been integrated.

START TIMECODE CUSTOMIZATION
Now you can add a countdown or slate at the beginning of your timeline, and have the action start at hour one.  The ability to set timecode is a necessary for working in broadcast.

SDK FOR CAMERA MANUFACTURERS
Camera manufacturers now have the tools necessary to make future products compatible with FCPX upon product launch (instead of FCPX having to update to support each type of new camera/technology).

FREE FCP7 TO FCPX PDF
We’ve seen similar tutorials/reports from third party sites and resources, but now Apple includes an official PDF showing how to make the transition between these two applications.

Apple promises future updates in 2012 to include support for external broadcast monitoring and multicam editing (both major feature requests that were left off the initial FCPX release).  In the meantime, this FCPX update may be enough to keep the FCP ship afloat… bringing back longtime FCP editors and reeling in new ones. Update to Final Cut Pro X 10.0.1 in the Mac App Store.