Average Video Editor Salary – How to Make More Than Your Competition

The future outlook of the video post-production market might keep you up at night…or cause you to create your best work.

The Bureau of Labor Statistics‘ most recent report shows that film and video editing positions are projected to grow only 5 percent from 2010 to 2020, slower than the average for most occupations.  The Bureau states that the consolidation of video related positions is partially responsible for this slow growth, as producers and reporters are becoming increasingly more responsible for editing their own work.  No doubt, tighter production budgets have led to this merging of what were traditionally separate positions.

Applications and hardware continue to drop significantly in price (note: DaVinci Resolve and Autodesk Smoke).  Low cost access to video editing tools will without question continue to drive up the number of individuals who claim themselves as “video editors”, further increasing competition. 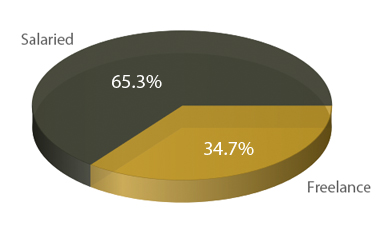 The type of post-production work encompassed in the term “video and film industry” is wide ranging.  This is one factor that leads to a significant disparity between the highest paid editors and the lowest.  In 2010, the bottom 10% earned less than $25k, while the highest paid video editors (top 10%) made over $110k.

So, in an industry with slow job growth and declining barriers to entry how can you stay competitive, keep moving forward AND be one of the top earners?  Be better.

The future outlook of the post-production industry may be a bit flat according to the Bureau’s report, but it doesn’t have to be FOR YOU.  Work hard and separate yourself creatively from the rest of the pack.  The cream of the crop always rises to the top.

How do you stack up to the rest of the industry?
Let us know your thoughts in the comments!