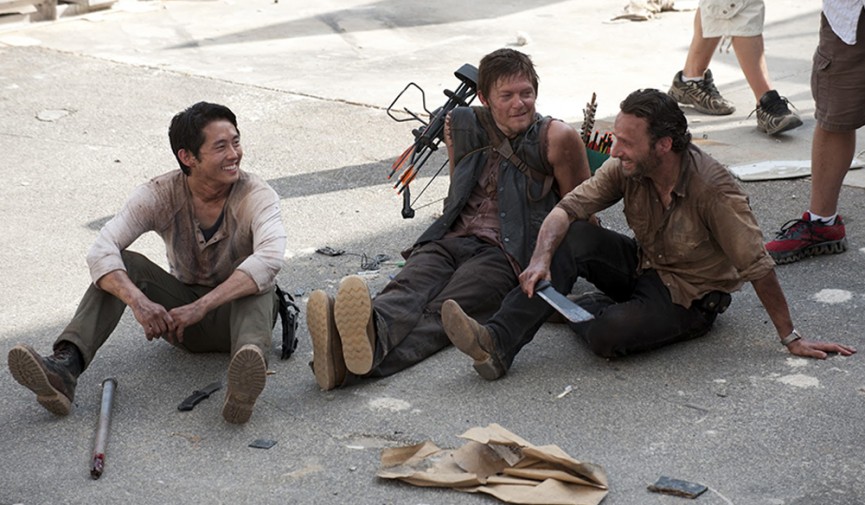 Behind the Scenes: Creating Amazing Visual Effects for The Walking Dead

Go behind the scenes of AMC’s blockbuster zombie drama The Walking Dead and discover how they create the jaw-dropping (and face chewing) VFX.

Ever wonder how they create the realistic zombie VFX for The Walking Dead? FXGuide.com recently sat down with the show’s visual effects supervisors to get a behind-the-scenes look at how they produce their VFX magic.

An intense amount of motion capture and modeling goes into creating the realistic zombie characters, all done by the skilled team at LA’s Stargate Studios. Pro visual effects artists use Maya for The Walking Dead’s modeling, rigging, and animation, while After Effects is used for compositing characters and effects into the final show. Lightwave, 3ds Max, and Photoshop are also used in the visual effects pipeline. The team relies heavily on blue and green screen to create digital set extensions and visual enhancements.

A cool visual effects workflow hack: Stargate’s team has compiled a library of CG zombies that can be added to any scene. This cuts down the number of on-set extras that are needed, making shooting faster and scenes more versatile.

Check out FXGuide’s full post for a fascinating behind-the-scenes look at the post-production process of The Walking Dead, complete with interesting before-and-after VFX shots. Here are a few VFX breakdown videos from Stargate Studios that explore the blood-and-guts process of creating The Walking Dead’s visual effects:

Best of The Walking Dead VFX

Be sure to check out PremiumBeat for all kinds of VFX tips and demo reels!