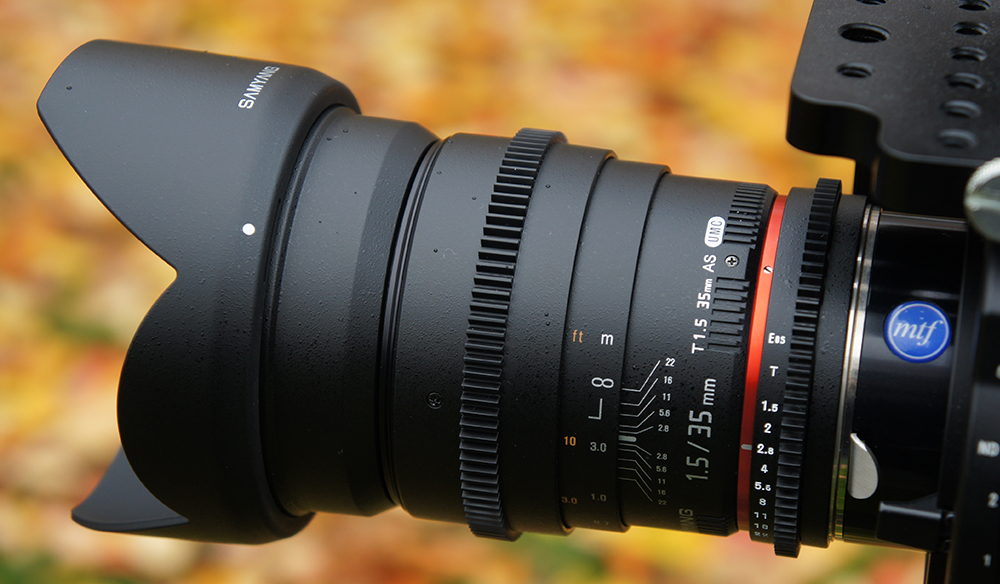 The Best EF Lenses for Filmmaking Under $1000

These affordable lenses are fantastic tools for creating cinematic masterpieces. Here are the very best EF lenses available for less than a grand.

Looking for a great filmmaking lens to go with your Canon camera? These lenses won’t break the bank. Check out these awesome EF lenses, all under $1,000.

One thing you should know before we get going is that Rokinon, Bower, and Samyang lenses all come from the same manufacturer. So, if you’re comparing new lenses from these three companies, they’re actually the exact same.

Whether you’re a photographer, videographer, or filmmaker, owning a 50mm lens is a must. While most photographers may go for a 50mm f/1.2 or f/1.4, filmmakers typically use T-stops to explain the amount of light that actually hits the camera sensor.

One of the best lenses for indie filmmakers is the Rokinon 50mm T1.5. The lens has gear rings for follow focuses and a de-clicked aperture for easily moving between lighting situations.

Another solid lens is the 24mm, which is typically great for getting a wide shot in a small space — as long as you have a full-frame camera, of course. The Rokinon 24mm T1.5 is perfect for getting wide shots in low-light environments. One of the perks of using this lens is its surprisingly small minimum-focus distance. This lens can create a really neat distorted (yet up close) effect. If you’re shooting an intimate shot (like a SnorriCam or POV shot), this is a great lens to use.

Similar to the 50mm Rokinon, an 85mm T1.5 lens is fantastic for making your subject look great. While it all comes down to cinematic preference, I typically like using an 85mm lens instead of a 50mm lens, just because it has a slightly shallower depth of field. Some say that an 85mm lens is also more flattering for your actors.

The Rokinon 35mm T1.5 is also a great tool to have in your filmmaking arsenal. Like all the other glass on this list, this lens comes fully loaded with gear rings and a de-clicked aperture. This lens is great for shooting medium shots or any other shooting scenario where slight warping is permissible.

A few years ago, the Canon 24-105mm f/4 lens probably wouldn’t have been a good choice for filmmakers, due to its inability to shoot in low light. However, thanks to recent advances in modern camera sensors, filmmakers are no longer feeling restricted when shooting in low-light environments. A new Canon 24-105 is actually a fantastic all-purpose lens if you frequently shoot run-and-gun projects. This lens can also be particularly helpful if you shoot documentary films or weddings.

For just over $100, there’s no better lens deal than the “Nifty Fifty” from Canon. This 50mm 1.8 lens produces fantastic results that rival those of even the most expensive lenses on the market. The thing that makes the Nifty Fifty really unique is its fantastic bokeh. Using this lens, you can very easily create a shallow depth of field and give your video projects a much more cinematic look.

If you want an image quality that’s slightly better than the Nifty Fifty, the 50mm f/1.4 might be the lens for you. This lens, while not as fantastic as the f/1.2, is great for shooting in low light. If you shoot photography on the side, this lens also has really good autofocus capabilities that aren’t found in the f/1.8. Keep in mind though, neither the f/1.8 nor the f/1.4 have gear rings or de-clicked apertures.

While vintage lenses aren’t always the most sharp, they can get excellent low-light results for a very low price tag. A quick eBay search will yield hundreds of vintage lenses that can usually be bought for less than $100 and adapted to virtually any modern camera mount. Filmmakers don’t typically use an autofocus features, so a vintage lens will work in most filmmaking scenarios. One set of vintage lenses that I always look to is the Olympus OM series.

If you want to learn more about using vintage lenses for video projects, I recommend checking out the Creating Custom Cine Lenses post here on PremiumBeat.

There are plenty of other Canon EF lenses under $1,000, but the ones found on this list are, in our opinion, the best for filmmaking.

What lenses do you use for your filmmaking projects? Please share in the comments below.