Blackmagic Design delivers a major upgrade with the release of the new DaVinci Resolve 9 Public Beta.  Resolve 9 is currently free to existing customers and available in Windows, Linux and Mac flavors.  With over 90 new features and a re-designed interface, the new Resolve 9 has more color grading power than ever before. 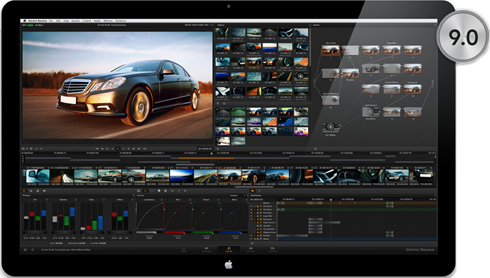 With the new DaVinci Resolve 9 emphasis was placed on efficiency, streamlining the color grading process.  The new UI and feature set was aimed at making color grading faster so that the colorist can focus on the image, and not toying with “cumbersome software feature sets”.  Among the updates to Resolve 9 include larger full color palates with more tools for faster grading, scrubbable media thumbnails, and greater metadata and audio support.  For a more complete list of the 90+ new color grading features in Resolve 9 check out Colorgrader Network.

So you’re ready to dip your toes into pro color grading waters, but where do you start?  Even for past Resolve users the new interface may take some adjustment.  Check out these overview tutorials of the new DaVinci Resolve 9 from leading professional colorists – a quick way to familiarize yourself with the new UI and toolset.  Dive in!