What if you could visually see different effects before you apply them to your After Effects project?  Using Brainstorm in After Effects you can.

Common scenario: You’re working with a video producer and they aren’t sold on the look you’ve given a graphic or video.  They don’t know what they want exactly, but they know they want something different.  This scenario happens quites often in video edits – you’ve got to come up with a new style or technique but don’t have a lot to go on.  Frusturation ensues.

Luckily, Adobe After Effects has a built-in tool that will help you BRAINSTORM a range of options based on keyframable effects in AE.  First you’ll apply an effect to a piece of media in AE.  Then, using the After Effects Brainstorm tool you can dial in the amount of randomness you’d like to see in your results.  The higher the randomness, the more variation you’ll see in your Brainstorm. 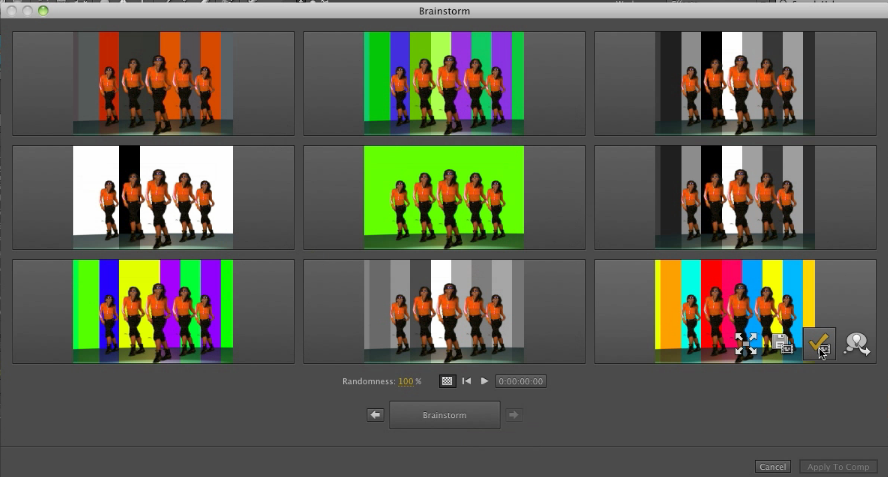 AE will dish out 9 effects variations based on the original effect.  With this you can apply one of the variations to a new or current compoisition or tell AE that you’d to brainstorm more results based off of one of the variations.  Keep repeating this process until you find the ‘perfect’ effect that satisfies your picky client’s needs.  After Effects Brainstorm will help you hone in on a unique look quickly and without having to manually modify keyframes and parameters to test the effect – huge timesaver.

After Effects Brainstorm is an often under utilized feature, but it’s one that every AE user should be using!  In the video tutorials below (by three of the web’s biggest AE advocates) you’ll learn how to use After Effects brainstorm in your motion design and video editing projects:

The Brainstorm Tool in After Effects CS6 from Angie Taylor

The Brainstorm Tool from John Dickinson for Motionworks