One of the biggest criticisms of Final Cut Pro X is the inability to open up previous FCP project versions in that application.  Asset management and post-production workflow application CatDV, now works as an intermediary to bring your FCP 7 projects into FCPX.

When Final Cut Pro X was released many editors were quick to say that Apple had “abandoned” the video editing market.  Some felt betrayed, as FCPX did not offer all of the same features we’ve become accustomed to in earlier versions.  But most of all (and for me personally) the biggest shock was that FCPX would not support older FCP projects.  I now have years and years of old projects that cannot be modified/updated using this new application.

Using their CatDV asset management software, UK-based firm Square Box Systems offers up a work-around for “translating” your FCP projects between older versions and FCPX.  For the unfamiliar, CatDV is a workflow tool that supports you through all stages of post:  adding metadata to clips during logging, transcoding video files, building searchable clip databases, archiving workflows, etc.  CatDV works to make your editing process more organized and efficient (the application has won numerous industry awards over the last few years).

But now CatDV may have “solved” my biggest hangup with FCPX as well.

While both versions of Final Cut Pro have the ability to import and export projects as XML files, FCP7 and earlier versions use XMEML and FCPX uses a completely new subset called FCPXML (for more info on XML types check out this informative post over at Digital Rebellion).  The crux of the issue is that both XML types organize files in completely different ways…making it impossible to open XML files from FCP7 (and earlier versions) in FCPX and vice versa.  So, you’re looking at no cross project file support and no cross XML support between older FCP and FCPX.  Like many editors, I was feeling pretty abandoned.

Import in your XML files from Final Cut Pro 7 and earlier FCP versions into CatDV.

Pick a sequence from your project and CatDV will open up a cuts-only version of it.

Now, export out a Final Cut Pro X XML file out of CatDV and open it up in FCPX. 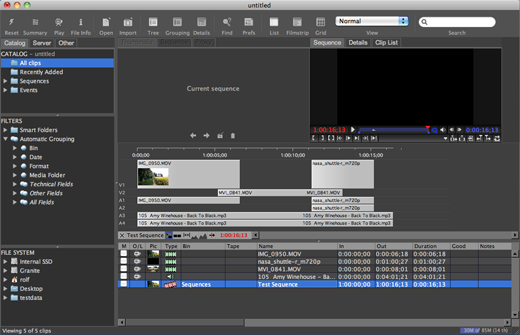 With most workarounds, it’s not a perfect situation. It’ll be a cuts only version of your original project (no transitions, no plug-ins added, etc).  You’ll likely lose some clip metadata you may have had in your previous project.  Multiclips and nested sequences won’t be supported.

It’s definitely not ideal….and not the workflow I hoped for when I first heard FCPX announced.  But it’s better than nothing.  And going into a future that won’t be supporting “legacy” Final Cut Pro projects, this little workaround may be a huge time savings.  It may not be perfect, but when clients come back requesting re-edits and changes on projects that were made in older versions of FCP…well, I’ll be glad I have this option.

CatDV Pro is avaliable for $395 and is available for both Mac and PC (supports AVID, Premiere, FCP and FCPX). Get detailed info about using this workflow, as well as all of the application features, over at Squarebox.co.uk.