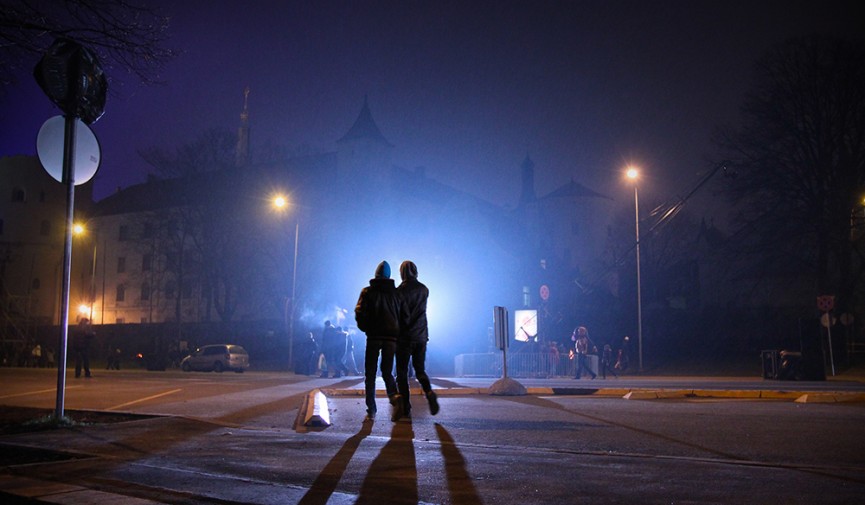 Cinematography Tip: Why ‘Day for Night’ Is a Horrible Idea

‘Day for night’ is the process of making daytime footage look like it was shot at night by either using a filter, post-processing, or both. While there are some examples in modern cinema of good day for night conversions, usually day for night will only give you poorly colored footage that isn’t very cinematic. Let’s take a look at why day for night is a bad idea and offer a few creative alternatives.

One of the biggest differences between shooting at night and shooting in the daytime is the sky. Shocking, right? The daytime sky is, for the most part, almost always going to be overexposed — even if you are underexposing your subject. This means you will need to avoid the sky if you’re trying to shoot a nighttime scene during the day. It will be solid white, which will greatly reduce your creative flexibility. Sure, you could tint your footage to tone down the white sky, but a real night sky doesn’t work like that.

In most shooting circumstances, the sky at night will be brighter on the horizon and very dark in the actual sky. If you’re shooting day for night, there’s really nothing you can do to simulate this nighttime occurrence other than do a lot of post-processing which will take forever and likely look terrible. We’ll discuss this further below.

2. Shadows Will Look Off

One of the biggest problems with day for night conversions is the shadows. As you probably already know, shooting in direct sunlight during the daytime is generally a bad idea. Your subject will get some very unflattering shadows — specifically raccoon eyes. Moonlight normally doesn’t work like that. When it does, it still looks strange on camera.

There will be other weird lighting occurrences that happen in the daytime that don’t occur during the night, like harsh reflections and possible lens flares. On the flipside of this, you’ll also have to worry about portions of your subject being overexposed. You’ll have to crush the whites in post in order to fix this. And as you can see above, that solution will almost always look really bad.

3. The Color Cast Will Look Terrible

However, no matter how you do it, dark blue footage is not what nighttime footage looks like. There are a lot of colors at night, not just blue. The example above from Mad Max: Fury Road is a great example of poor day for night conversions in modern cinema, but then again… maybe that’s the point.

4. It Will Take a Lot of Time in Post

A still from Video Copilot’s Day for Night tutorial

In light of all of the hurdles we’ve mentioned above, the biggest challenge to making day for night footage look convincing is the post-processing. There’s a lot of work that needs to be done to do ‘good’ day for night conversions. A good conversion will:

Even after you do all of this, you’re still going to be hard-pressed to make your day for night look convincing. Even the best After Effects teachers out there have a hard time making convincing day for night conversions.

The good people at Sony are technological wizards when it comes to camera sensors. Case and point: the Sony a7S. The a7S is an incredible camera that can shoot under moonlight. Don’t believe me? Check out this video shot by the a7S:

While you will have some issues with grain and noise reduction in post, the overall color grading is much more convincing than the typical day for night blue filter.

A still from The Cabin in the Woods. Where is that harsh light coming from?

Who said you can’t light a nighttime scene? Audiences are very easy to trick when it comes to lighting. Most people in the audience won’t ask where that soft fill light is coming from. Instead, they’ll focus on the content of film or video as long as the lighting is close.

By using a dim light and a sensitive camera, you can generally get good cinematic footage at night even if it doesn’t make a lot of sense. A simple battery powered LED should do the trick in these situations.