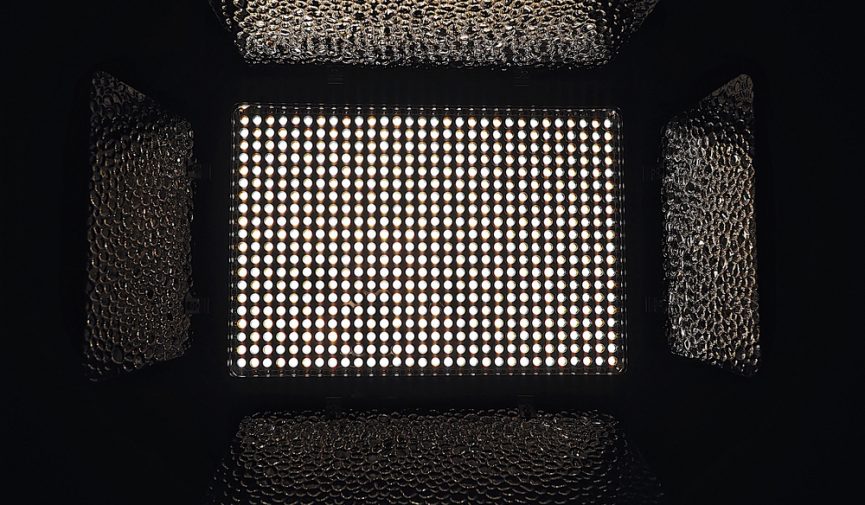 If you know you’re shooting with limited access to power, these LED lights can make all the difference.

If you know you’re headed for one of these shoots and you have to pack light, it might be worth acquiring an LED light that is compact, independently powered, and budget friendly. The keyword is compact; we want to look at lights that can easily fit in your gear bag.

The following are the LED lights that I’ve been most satisfied with in various shooting circumstances over the years. 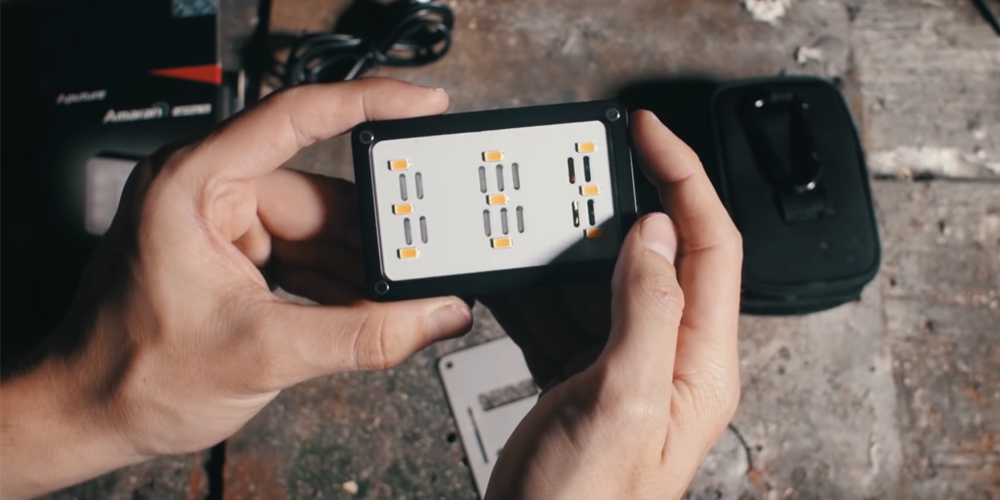 The AL-M9 is a 6×9 cm palm-sized light that uses nine integrated LED chips instead of conventional LED bulbs. It’s a very basic light with straightforward options: on-off, increase-decrease brightness. However, compact lights, do not need much more functionality than this, and the AL-M9 really is compact — I can slot it into my wallet along with my debit cards. 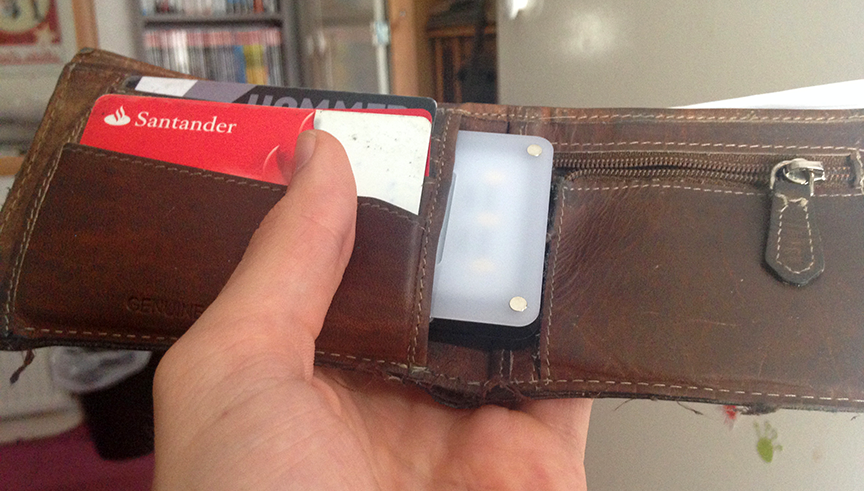 Despite its size, this LED gets extremely bright. It has a LUX rating of 950 at 0.3 meters and a very high CRI rating of 95.

Because of its compact size, you can get creative with the AL-M9’s placement — in the fridge, between books on a bookshelf. You can have an actor hold the light on top of a mobile phone if the character is making a phone call. The possibilities are endless.

The AL-M9 also comes with a cold shoe adapter so you can mount it on top of your camera. You just slot the light into the adapter and place it in the cold shoe mount. The adapter also allows you to direct the light to the side, which is essential if you need to bounce the light rather than directly illuminate your subject. 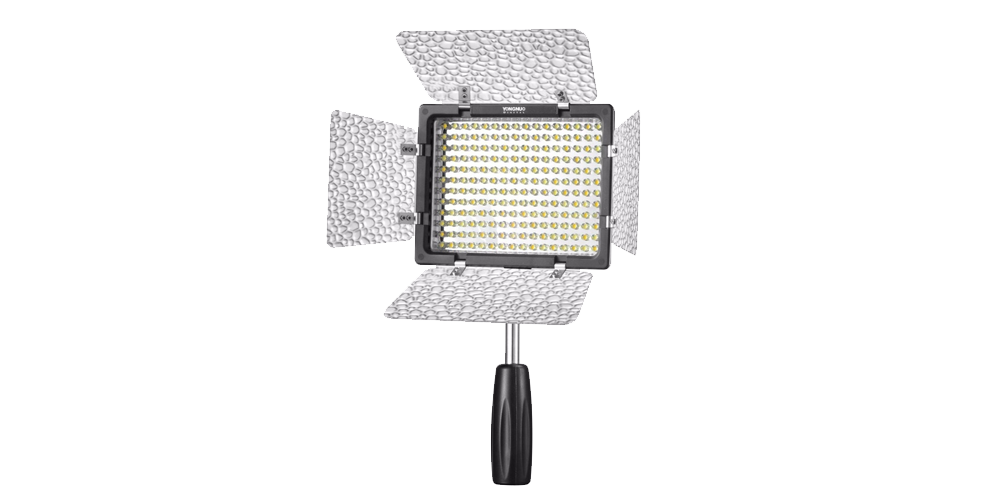 This portable LED has been around for a while; however, as successors have improved upon this model, the YN160 has become very affordable. You can pick these up on Amazon for under $50. It’s a compact light, but you won’t be able to place this one in your wallet.

The YN160 offers more flexibility of placement than the AL-M9. It has four reflective barn doors, sixteen brightness increments, and a filter slot for four filters that come with the light.

As the light output isn’t that strong, the YN160 can be ideal as a kicker or fill.

Like the AL-M9, the YN-160 comes with a cold shoe mount that you can tilt up and down. It would also be worth acquiring a light stand adapter so you can use these on set.

The Z96 has 64 fewer LEDs than the YN160. However, it does have better color rendering (95). This light retails at $159, although if you look hard enough, you can catch a great deal at lesser-known outlets. 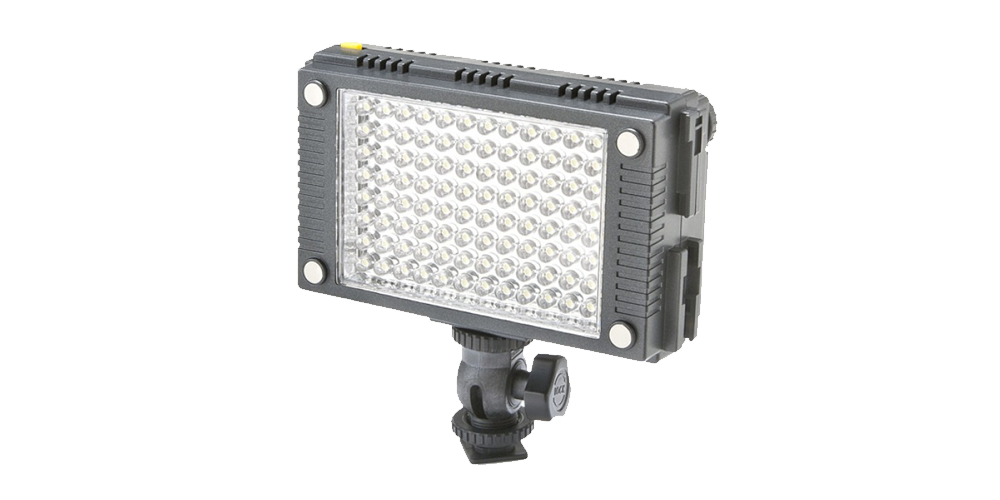 You can also grab the older version (which has a CRI of 85) on the aftermarket. Recent listings on eBay suggest the older model now sells for $60-$75.

You can increase the Z96’s brightness in percentages of 10, and it comes with a hot shoe attachment, a diffusion filter, and a tungsten filter. The biggest selling point for this compact LED is that you can connect several units together. Joining four units together will give you a brighter output than the average 1×1 panel! That’s a 1×1 panel that you can store in the top of your gear bag. It’s a great alternative if you don’t have the option to actually bring a light panel to your location.

Much like the ML-A9, due to the compact size of this light, you can place this in a variety of creative areas to enhance your shot.

In the shot below, the character is seeing the symbolic light of death before her demise. A 300w served as “the light,” and it threw the bookcase into darkness. I placed the Z96 behind the actress on the bookcase and illuminated part of the case, which also pulled the character out of the dark background. This wouldn’t have been possible with a larger light. 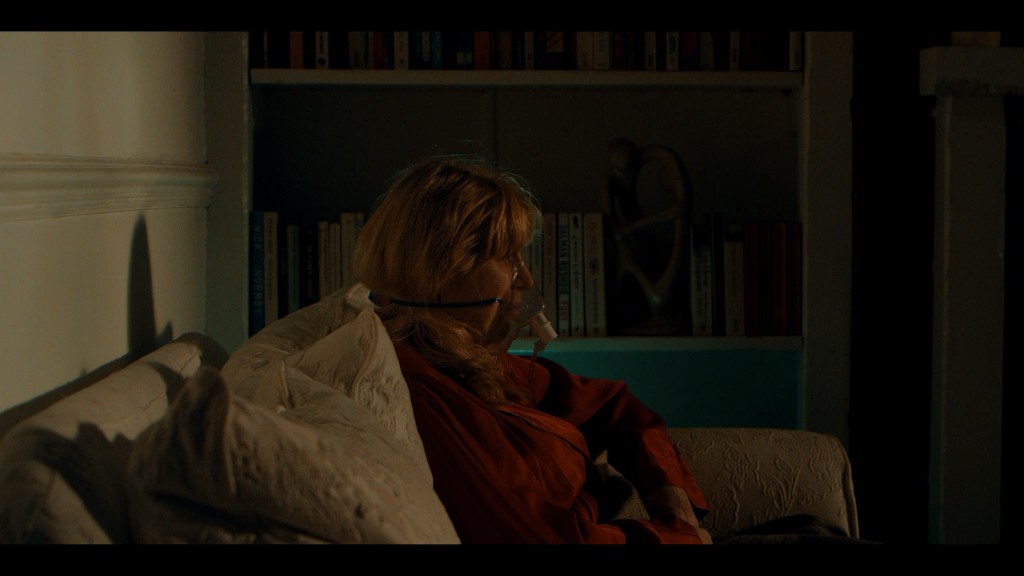 Please be vigilant when buying the Z96 and the YN160 from eBay. There are many listings by third-party sellers that are knockoffs. These lights will not have the same build quality or safety measures as their official counterparts.

All of these lights are great choices when you’re on the road with limited resources. If you’re flying overseas, the option of buying AA batteries abroad makes life much easier than figuring out if you can take a lithium ion battery on the plane.

Do you have any go-to compact lights? Let us know in the comments.