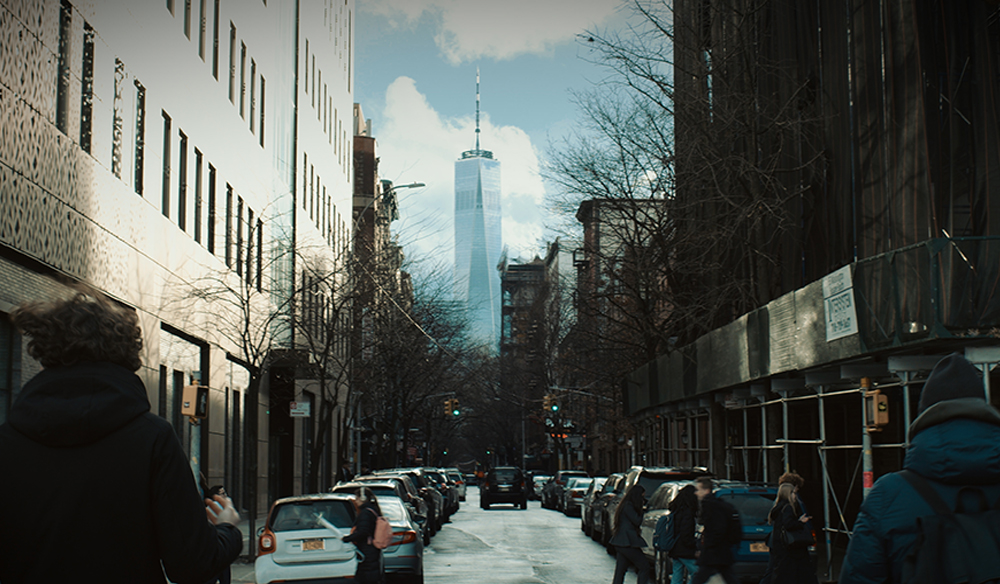 How to Make A Travel Video that Really Stands Out

Travel videos are a huge part of the social sphere. Here are a few tips on how to make your video stand out in a sea of content.

Travel videos are an essential part of the social video sphere, and you see them everywhere — your friend goes to Jamaica armed with a GoPro, shoots themselves climbing a mountain and petting a turtle, then slaps all the clips together to a Pitbull song. Now, that’s all fine and good for folks that just want a nice, little package of clips to remind them of their vacation. But, if you really want to make an impression with a travel video, you’ve got to do a little better than that. It takes thought, intention, inspiration, and preparation to make your video stand out in a sea of content trying to do the same thing. So let’s see what makes a good travel video. 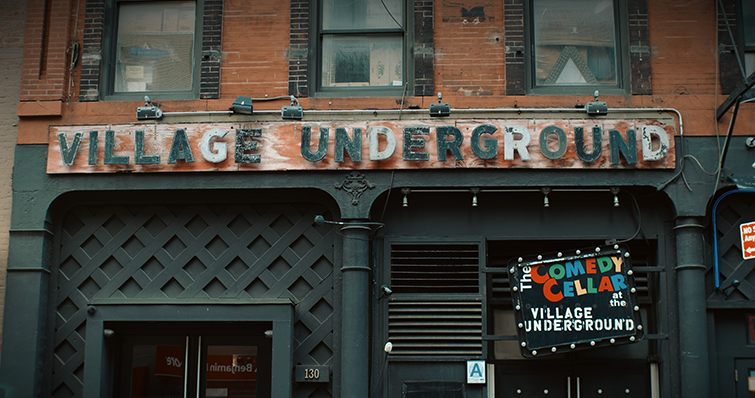 Listen to the soundtrack while you shoot to get a sense of what your audience will be experiencing.

One of the most important parts of making a unique travel video is choosing your music beforehand. The music forms a bedrock upon which to place your clips, which will influence how people feel when they view your video. What does the city remind you of? What music comes to mind when you picture yourself walking the city? L.A. reminds me of classic folk rock, New Orleans inspires Jazz, and for NYC it’s classical music. The skyscrapers are so grand and the spectacle of the city makes me feel like it should pair with a classical-style song. NYC feels timeless, so a travel video about it should feature a timeless song. Whenever I think of the city, the song “Rhapsody in Blue” comes to mind — mostly because I remember watching Fantasia 2000 as a kid, which had a fast-paced animation (based in New York) describing the stories encapsulating the hectic nature of the city. But for my video, I wanted something a bit slower that would pair well with static shots of the city but still have sections of intensity to pair with the fast-paced life I filmed there. So, “Claire de Lune” was a perfect match.

When you choose your music beforehand, you can listen to it while you’re shooting, to get a better idea of what your final product should look like. It forces you to shoot with intention, giving you a stronger idea of the feeling you want to convey during your travels. 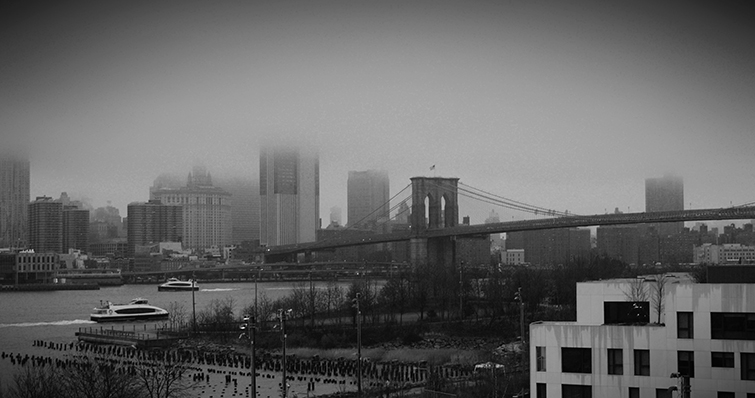 Find inspiration from films shot in the city you’re trying to capture.

Now, you have a song and location in mind. So, aside from music, what media make you think of your destination? Whether it’s a movie, a TV show, a music video, whatever — find something that has influenced your view of the location. There are plenty of timeless films that showcase New York: The Godfather, Taxi Driver, Elf — the list goes on. However, the one that stuck with me was 1979’s Manhattan. There’s a feeling you get watching the introduction of that film that sucks you into the city — connecting you to a place you might never have seen before. The static shots of the buildings and people going about their day gives you a beautiful taste of what it feels like to be a fly on the wall of the Big Apple. So, take those inspirations, collect them in your head, and head off into the next tip . . .

Plan a Theme for Your Shots 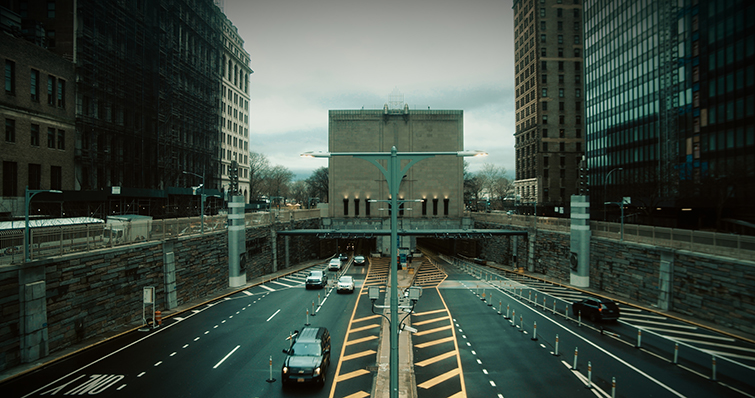 Prior to shooting, figure out the symmetry of your location.

All of your shots should connect somehow. There should be a common thread through them all, whether it’s a theme of the city you connect with, or maybe the composition of the shot that makes it all fit together. New York is an extremely symmetrical city. The streets are a grid, and all of the buildings feel perfectly placed, with hard edges and slick lines. So, I wanted that to be the central theme of my video — to have iconic city locations in either the center of the frame or cozied up on both the left and the right. On top of this, I wanted (essentially) a static tripod shot with a handheld set-up, which you can pull off by . . .

Shooting with a Wide Lens 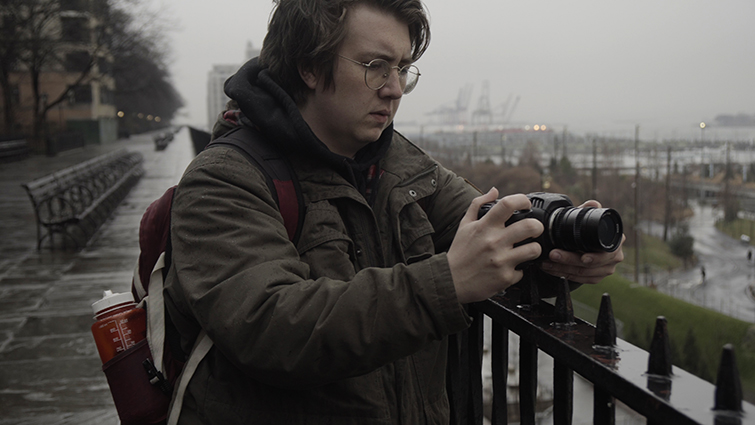 When shooting without a tripod, use a wide lens to cut down on the natural shake your hand produces.

If you’re traveling, I’m sure you won’t want to lug around a tripod to get a steady shot. So, the next best thing you can do is prep yourself for a smooth warp stabilization by using a wide lens. When shooting on a telephoto lens, your hand shake is going to be much more pronounced. If you’ve ever tried to add a warp stabilizer effect on a telephoto shot, you may have run into problems with extreme warping. That’s why you should use a lens in the 24mm or 35mm range — to cut down on the shaking and capture more of your location. Warp stabilizer is much more friendly to a wide lens shot.

When I captured my shots, it was with a 24mm lens on a handheld body with pretty satisfying results. But, here’s a problem I ran into — no one reminded me that New York is freezing in the winter. Yeah, I should’ve known better, but a Texas boy like me isn’t built for cold weather. My hands were violently shaky. That’s the sort of problem you’ll run into on the road. So, prepare yourself . . . 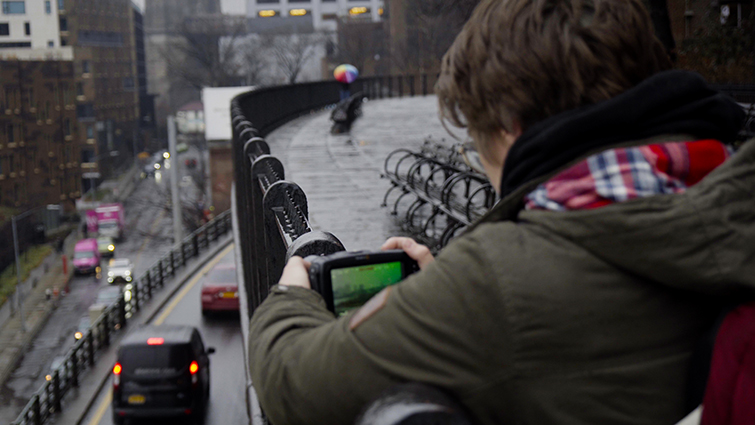 For a quick, steady shot, pack a monopod.

A monopod is an extremely versatile tool on the road — it packs light and is easy to set up on-the-fly. If you want steady shots, I highly recommend bringing one along. If you don’t want to, use the world around you as a stabilizer. When I was in Brooklyn, I wanted to get a steady shot of Manhattan, but all I had was my hands and a metal fence. So, I just popped my camera on top of one of the spikes to keep the shot steady. Always be ready to throw some ingenuity into your shots.

So, that’s what I learned while making my travel video. Don’t be afraid to get creative and weird with it — it’s a fun way to make your video stick out. It’s always a blast exploring a new city, so just sink yourself into it, let its energy flow over you, and enjoy the experience. And, if you capture it right, people are going to notice.