Final Cut Pro Quick Tip: How to Export Markers as a List in FCP 7

Using markers in FCP to supercharge your workflow

When Apple released Final Cut Pro 7 back in 2009 one of the new features that was most overlooked (and under-appreciated) was the ability to export out a marker list in text format.

You may be thinking, whys that such a big deal? A marker list? Yes, a marker list…one of the easiest ways to keep your workflow running smoothly and expedite your editing process. You see, the ability to export markers means that you now can quickly take notes WITHIN a timeline…. so quit jotting down timecode with paper and pen and lean how this little feature can make a big difference in improving your post approach!

Let’s propose a hypothetical (but very common) situation: A client comes to sit in on an edit to review. They’ve got tons of ideas on how to improve the current cut and you’re going to have your work cut out for you. Sure, you could open up a spreadsheet, jot down notes, copy over timecode and jump back in forth from applications. But, there’s a much simpler way. Here’s how I like to use marker lists when working in a client environment….

When a client comes in to review an edit we first watch it in it’s entirety. No stopping, no tweaking. In my years of working with clients I’ve found that initially watching a video all the way through is the best way for the client to get a feel for the cohesive piece…. whereas if you stop throughout the initial watch they may be asking questions that they will find answers to later on in the video. Sometimes we do this two, three, four times. As they watch I ask them to take mental notes on things they might like to change, suggestions they may have.

Now, once they’ve gotten a good feel for the video we’ll go through it second by second…. and often frame by frame. Sure this can be a painstaking process but we’re about to make it a lot easier… by creating a marker list!

As you go through the video and begin picking it apart, park the playhead on a frame that is relevant to a change you’d like to make — for example, maybe you’ll need to substitute a shot, create a music change, switch a font, add a sound effect, etc.

With the playhead on the right spot in the timeline use the shortcut “M”. Tap it twice.

The first time you tap it a marker will be placed on that frame in the timeline. The second time you tap will pop up the “Edit Marker” dialogue window. In this window you can add pertinent information about the change you’ll need to make. You can add the name of the marker, comments, the marker duration and a specified color. 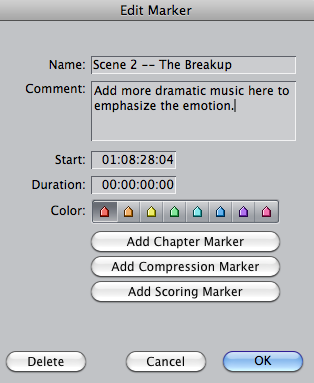 Once you go through the timeline and you’ve added in markers in all the necessary spots, you’re ready to export them as an organized list. To export:

Now you have a punch list that you can take into either Microsoft Excel or Numbers (Apple’s spreadsheet software). I like to work the list, checking off the tasks and changes one by one. You’ve also got a really clean record of all the changes that were discussed with the client. Shoot them off an email with the list and you’ll both be on the same page. Now, that wasn’t so hard was it?

This list can be sorted by the different variables you specified in the “Edit Marker” dialogue window (marker name, comment, starting timecode, duration, color).

When you’ve completed all the to-dos on your marker list you can clear them off the timeline. To delete them one-by-one navigate to each one on the timeline and use the double-M shortcut. Then choosing “Delete”. Or you can quickly delete them all by navigating up to the Menu Bar and choosing Mark>Markers>Delete All.

Organization is the key to editing efficiency! Stay well structured and increase your productivity by exporting marker lists out of Final Cut Pro!