Although first uploaded over 4 years ago, this behind-the-scenes shot of LOTR is taken the Internet by storm with its mind-blowing take on forced perspective with a moving camera. 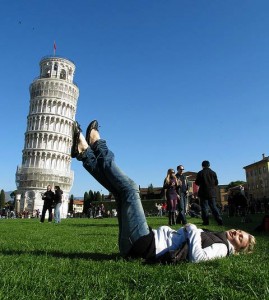 Forced perspective is ubiquitous with modern media – no doubt you’ve seen a pic of your friend on Facebook “holding up” the Leaning Tower of Pisa or balancing the Eiffel Tower on their palm.  The visual trick makes an object appear closer or further, smaller or bigger than it really is.

The same technique is often applied in film, but on a much more technical level.  This clip of the Lord of the Rings behind-the-scenes is creating quite a stir in the online video production community, as it showcases the great lengths that were taken to force perspective in that film.  In the book/film, Hobbits are smaller than humans…so this had to be demonstrated in the film either by special effects or forced perspective.  Unlike many forced perspective shots that are merely camera lock-offs, Lord of the Rings utilized two seperate dollys running in tandem (one for the camera itself and the other for talent) to achieve the effect with a MOVING camera.  A very clever effect that is pulled off successfully!