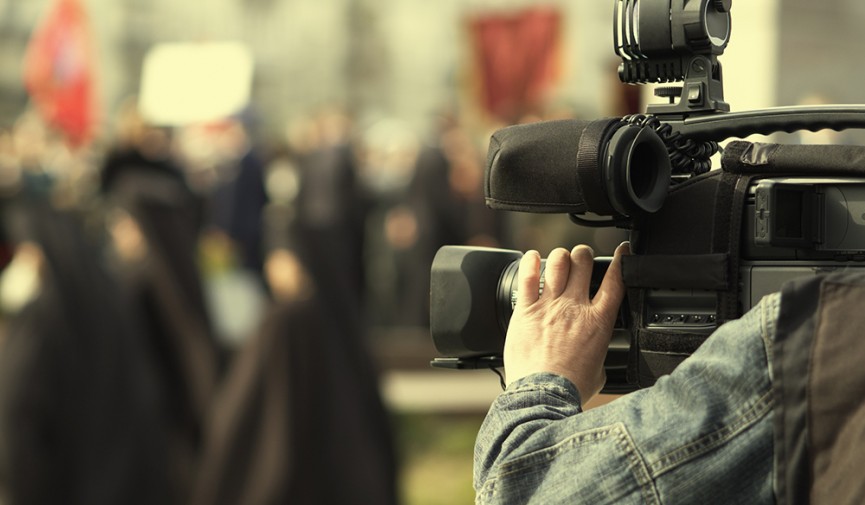 Guerrilla filmmaking can be risky, but sometimes there’s no choice. Here are some important planning tips that can help prevent disaster.

All images from Shutterstock

When faced with the dilemma – to shoot without permits or not shoot at all – a lot of filmmakers will opt to shoot their film “guerrilla” style. In other words, they’ll choose to go ahead and film without location permits or permission from property owners to keep more money in the bank. While this may seem like a fairly easy decision (especially when faced with having to shell out potentially thousands of dollars for permits), there are some severe downsides to consider when going down this path.

If you’re caught at the wrong place at the wrong time, you run the risk of having your production completely shut down, receiving additional fines, and the possibility of having your gear confiscated. Thankfully though, there are some workarounds that can help you tackle a guerrilla or low budget shoot if you want to do it right. These tips are equally as applicable to journalists who may be working in restrictive conditions.

Quick Note: When shooting guerrilla style there is always a risk that you will be shut down or fined. If you do choose to go down this path you are doing so at your own risk, so always be aware of the potential consequences. We would never advocate doing anything illegal. Be sure to check local laws and, most importantly, always keep your crew’s safety in mind.

1. Don’t Get Tempted By Cinema Cameras – Use a DSLR

The DSLR revolution may be slowing, thanks in part to cameras like the Blackmagic Cinema Camera, but as of today there is still no better option for shooting guerrilla style than a DSLR.

It goes without saying that the smaller the camera you’re using, the less likely it is that you’ll get caught, but there are other considerations as well. For instance, cameras like the Blackmagic Pocket Camera may be smaller than most DSLRs, but that doesn’t necessarily mean that they are going to be the right choice.

The Pocket Cam (and other similar cameras) are unique looking and often draw attention from onlookers, and they also often require more rigging than DSLRs which ultimately brings up the actual size of the camera. So while working with a small camera is one key to successfully accomplish a guerrilla shoot – it’s not the only consideration. DSLRs may not be in their heyday right now, but in capable hands they can produce gorgeous images.

2. Keep Your Crew out of Sight

If you’re shooting without permits, chances are your budget is limited and your crew is pretty small to begin with. That said, it’s still extremely important that you do not appear like a film crew in any way. Even with a three or four person crew, you can start to draw unwanted attention very quickly.

The number one rule when shooting guerrilla should be to keep the crew (no matter the size) out of sight unless completely necessary. As I mentioned above, film shoots tend to draw crowds. You need to be concerned about attracting members of the general public who can very quickly cause a scene around your guerrilla set.

It’s a huge mistake to have more bodies present on a guerrilla shoot than necessary, but unfortunately it’s a mistake that so many filmmakers make. Really the only person that needs to be present during shooting (outside of the DP and actors of course) is the director. Audio doesn’t need to be nearby (more on that in the next point), the make-up artist, PAs, and any other crew members should have no need to just hang out in plain sight while takes are rolling, so always make sure that your crew is situated in a low-key area when you’re actually shooting.

3. When It Comes to Audio, Always Go Wireless

If you have a half decent location sound recordist on your team, he/she will be begging you to use a boom whenever possible. Unfortunately though, boom mics are the biggest giveaways of a guerrilla film shoot, so you’re going to need to learn to work without one. Your sound recordist may not be happy with you for requesting lavalier microphones only, but at the end of the day, you are far more likely to get the shot you need when you avoid attracting unwanted attention.

Once you have your lavs up and running, the key is to figure out how to hide the wireless receivers and recorder. It’s usually best to have your sound recordist standing by with the gear in his or her backpack, or alternatively the recorder can be kept in a nearby car. This may seem like a bit of a headache to deal with, especially when trying to communicate with your sound recordist, but it really is the only option that you have when shooting guerrilla.

4. There Should Be No Gear in Plain Sight

It’s almost comical when I see filmmakers attempting to hold a discreet shoot, but then leave Pelican cases filled with gear, scripts, and other paraphernalia sitting around. In an ideal world, you don’t want to have any gear around you, or even on your person for that matter – other than the bare necessities, which in most cases is your camera and a single lens.

Even tripods can often give you away, so as painful as it might be, handheld is often your only option (so be sure this ‘look’ is in line with your vision). If more stability is a must for the look of your film, go ahead and use a monopod, shoot with stabilized lenses, or use a camera like the Sony A7 II that has built in stabilization. Whatever you do, just make sure that you are extra cautious when shooting with anything but a bare camera body (including a small shoulder rig, even) as it will draw more attention than you’re going to want.

5. Plan in Advance and Work as Fast as Possible

The one and only way to properly execute a guerrilla shoot is to strip your gear and crew down to the bare necessities and plan as diligently as possible. This means doing your research online, going location scouting ahead of time (to see which locations will be easiest to shoot at without permitting) and preparing your crew as much as you can.

Planning will make you far more efficient when it comes time to shoot, which will subsequently allow you to work a lot quicker. Any and all set up that’s required (such as hair/make-up or sound checks), need to be worked out in a different location close by, so that once you’re ready to shoot, you can just get in, get your shot, and get out of there as fast as possible.

The guerrilla film that made the biggest splash in recent years was Escape from Tomorrow, which premiered at Sundance in 2013. Shot entirely at Disneyland and Disney World without permission, the filmmakers utilized DSLRs and a skeleton crew to record the feature length film entirely undetected by park staff. Director Randy Moore described the process to Filmmaker Magazine:

We rehearsed each day’s dialogue in the morning, usually in my hotel room. The schedule was extensive and planned carefully weeks ahead of time to coincide with the direct location of the sun during each shot. There was no crowd control.

Takes were usually limited to just three or four before we’d arouse suspicion and have to go someplace else – it really all depended on the amount of traffic and visibility and the time of day….we must have walked through the entire movie at least eight or nine times during multiple scouting trips before we ever rolled camera.

SlashFilm did a review of the Sundance Premiere noting:

Sound was recorded without an on-set sound mixer, sometimes using smart phones, and sometimes using digital recorders taped to each actor, which would record an entire day’s worth of audio, which editors had to sort through afterward.

While the film was shot guerrilla-style, it doesn’t feel like found footage or home video. They chose to shoot the entire movie in black & white, a practical decision which helped them have a better feel for composition and lighting in the camera as they shot in the parks.

Did we pique your interest? Check out the trailer for Escape from Tomorrow below.

Have any other guerrilla filmmaking tips? Share in the comments below.