Proper Set Etiquette Will Get You Hired Again and Again

One of the most important things you can do when starting out in the film industry, is learn to abide by the unwritten rules of the set.

Many less experienced crew members are often coming right of school where they have been taught to ‘stand out’ from the crowd and show off how much they know or how great they are at a particular task. However, on a film set proper etiquette is often times just the opposite, and these behaviors can actually do you more harm than good. It’s crucial that newcomers understand that a set has a ton of moving parts and a good film set operates like a well-oiled machine. In order for this to happen, all of these moving parts must work together, coherently. Whether you’re looking for a refresher or are new to set life, here is a list of tips for set etiquette. These tips are not only for making sure you work well (and appropriately) with others but also pointers for getting hired again! 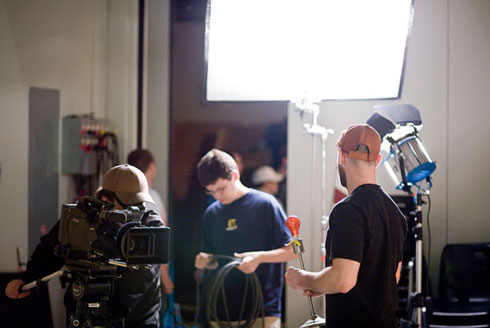 I would advise that you show up earlier than your scheduled call time when working on a set because there’s always a need for an extra set of hands and you’ll be remembered for being one of the first ones on set. It’s also typical for a shoot to go much longer than expected, so do yourself a favor and prepare to stay as long as you need to until the job gets done. This may be the easiest and simplest tip on the list, but it’s also the one that is most overlooked. It’s a primary reason that crew members lose their jobs or don’t get called again – so be on time.

Know Your Role & Respect the Chain of Command

Quite often, film sets can seem as if there is a lot of “down time” or standing around, but once the ball gets rolling, things become very hectic, very quickly. This is especially true for micro budget indie films, where money can’t be thrown at problems in order to solve them quickly, but can also occur on much larger scale projects. Make sure that you know your role inside and out so that when you are called to actually do your task, you are making the most out of the little time that you have to get the job done. If you’re working with new equipment, spend time with it in the days and week before the shoot so you’re comfortable and familiar with it when it’s ‘go time’.
One important role to follow when working on set is to respect the chain of command, in all circumstances. It is your department head’s duty to delegate and oversee your work. If you have any questions or concerns, approach your department head or the individual directly responsible for you on set.

Stick to Your Tasks

Your title on set clearly defines your tasks, creating boundaries for you and those you work with. It’s very important that you stick to your defined role and let others stick to theirs, leaving little room for error or confusion.
Sometimes there will be crew members who have experience in different areas on past sets, and as a result, they tend to overstep their boundaries and try to look like the ‘hero’. For example, if you worked as a DP on a previous set but you’ve been hired for this production in an entirely different department, it’s not your job interject and insert your opinion on matters of lighting or shot setups. Scenarios such as this do you more harm than good. Specific titles for crew members assume that individuals on set have an intimate knowledge of their roles, which is why they are hired to perform them. Stick to yours.

Avoid Too Much Small Talk

While it’s nice to meet new people and forge relationships, you’ve been hired to assist in making a film (and you are hopefully being paid to do so!) In this way, film sets are vastly different than many work environments where chatter occurs all day long and, in some cases, team building and communication is encouraged by superiors. It may seem as if you have time on your hands to chat with fellow crew members, but in those ‘down’ moments you’ve got to be watching and listening to those around you to so that you can anticipate what is required from you next. Simply put, socializing on set should be kept to a minimum. It is distracting, annoying and could cause you to drop the ball, not to mention that it just looks bad when your department head catches you chatting it up when you should be working.

One of the simplest and most effective things you can do on set is to simply be positive. Department heads love hiring crew members that work hard without complaining and that are natural problem solvers. Put yourself in the shoes of your department head on set and imagine what it would be like for them to be juggling so many different things all at once. When things don’t go as planned, when the shoot runs later than expected, and when everyone is exhausted, use this time as an opportunity to set yourself part by tackling it with a positive attitude. It won’t go unnoticed.

These are just a few tips that will help you have a better experience on set and increase your chances of being called back by the producers or department heads. A lot of what it takes to be a successful member of a crew just comes down to common sense, but you might be surprised at how often newcomers to set simply don’t follow these sort of guidelines. If you just remember to always show up early, work extremely diligently in the role you have been assigned, and remain positive and focused on set, you will be many steps ahead.