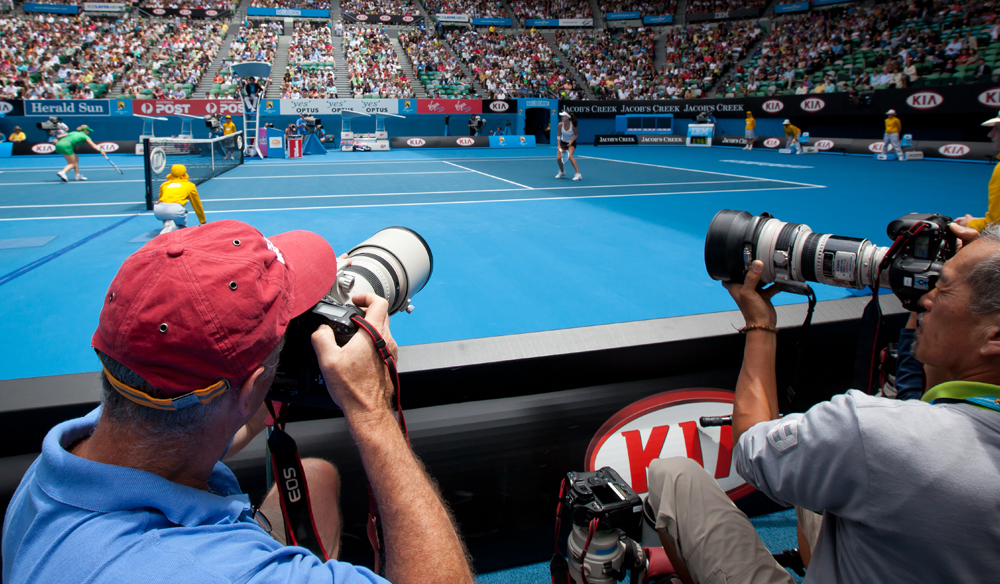 Capturing the action at a sporting event can be challenging. Set yourself up for victory by choosing the right lens for shooting live sports.

Every video project comes with its own unique set of technical challenges, and shooting live sports is certainly no exception. There’s arguably no more difficult type of event to shoot than a live sports game. The speed and intensity of the action can be difficult to follow and capture, and shooting from the sidelines severely limits your creative options. Without the right tools, you definitely won’t be able to capture the images you’re hoping for.

For those of you looking for some new glass to tackle this challenge, make sure you take the following considerations into account before buying your next lens.

It goes without saying that a long telephoto lens (such as a 300mm) will help you capture those nice close-up shots, even when shooting from the sidelines or among the crowd. But having a wide-angle lens in your kit (such as a 16mm) can be just as useful for different reasons.

When shooting live sports, there’s never really a middle ground from a lensing perspective. You’re typically either going to be buried on the sidelines far away from the action, or right up close to it — for instance, in the locker room after the game. Both circumstances call for different lensing options at complete opposite ends of the spectrum. While your telephoto might be the obvious choice for covering the game itself, your wide-angle lens will be a lifesaver when shooting interviews or b-roll before or after the main event.

Chances are you probably already have some normal focal length lenses in your kit. If you’re serious about shooting sports, then be sure to add both a wide-angle and telephoto to your arsenal.

In most scenarios, you’re going to need a zoom lens to cover the action in your frame most efficiently. With that said, you’ll want to avoid buying a zoom lens that only covers a standard range, such as a 24-105. Instead opt for a longer zoom like a 70-200 or a wider zoom such as an 11-16. Doing so will ensure that you have enough range to capture the dynamic changes in what you’re shooting.

You should also look for lenses that are parfocal — meaning they’ll hold the focus when zooming in or out. Not all lenses are parfocal, which can be problematic when trying to zoom to focus on your subject and then zoom back out to a wider shot — only to realize your image is no longer in focus. Working quickly is essential to shooting sports, and having a zoom lens (especially one that is parfocal) will help you move much more swiftly.

Achieving a stable shot when shooting in a live sports environment is easier said than done. You’ll often find yourself shooting in very crowded spaces, surrounded by people stomping, cheering, and potentially even knocking your gear from time to time. To add insult to injury, you’re likely shooting on a long lens, meaning that any shakes your camera picks up from the surrounding movement or other environmental factors will wreak havoc on your image quality.

For this reason, it’s absolutely crucial to use lenses with image stabilization. They’ll help mitigate any camera shake you may encounter in such a chaotic environment. Even if you have a very stable place to shoot from, you’ll still be glad to have image stabilization on your lens to help smooth out any pans and tilts that you make on your telephoto lenses.

Most sports stadiums are quite well lit, and assuming you’re shooting at 24p or 60i, your shutter speed is only going to ever need to be at a maximum of 1/60. This means that (under normal conditions) you won’t have a difficult time exposing your image properly, even when working with a relatively slow lens.

Having a fast lens can be essential in a scenario like this, as it’ll allow you to open up to a wide aperture and achieve a nice bright exposure, even when shooting at a high shutter speed. It’s unlikely that you’ll find a telephoto zoom lens with an F1.4 aperture, but even a lens that can open up to F2.8 will help you achieve nice results — especially when compared to many zoom lenses which often range from F4 – F5.6.

What is your go-to sports lens? Share in the comments below.