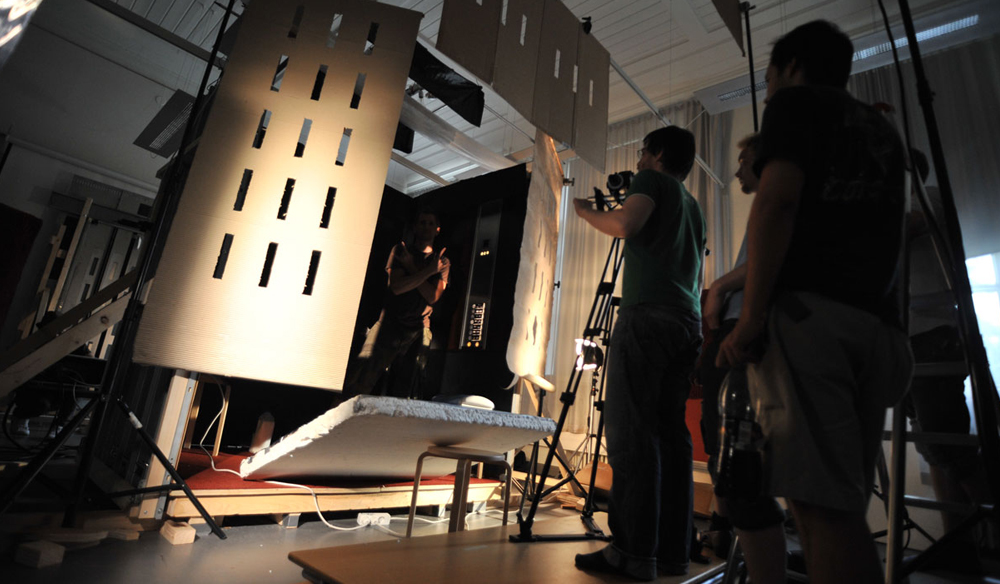 Even if you have equipment that costs thousands of dollars, sometimes simple household items can produce great results.

You can spend weeks reading filmmaking books, days watching filmmaking workshops, and hours reading websites like this one. Nevertheless, nothing pushes your creative skill set further than actually being out in the field creating and implementing ideas and techniques.

The shot below is from Lord of the Rings: The Fellowship of the Ring. Peter Jackson wanted Galadriel (played by Cate Blanchett) to be significantly different from all other characters, and to promote her level of magic and wisdom. Where other characters would have the standard eye light within their eyes, Galadriel’s eyes reflected the stars. This was not achieved through VFX or a unique lighting setup — it was achieved by using Christmas lights. A multimillion dollar grossing film used simple $10 Christmas lights to produce stunning and unique results. 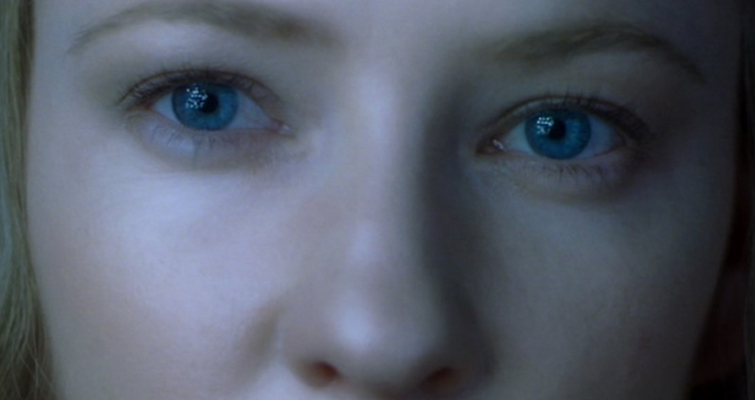 The point of this? Even if you have equipment that costs thousands of dollars, sometimes simple household items can produce great results or get you out of a tight squeeze. Just because you have the best doesn’t mean you always need to use the best. 2012’s The Avengers, a $220 million production, made good use of the Canon 5DMk II & 7D for some stunt shots. With such a large budget, they could have easily burned a better quality camera. However, they didn’t. They were smart.

Here a four lighting hacks using basic equipment that I have tried and tested over the years. All shots that are used as an example are pulled from footage that I have personally shot.

1. Use Net Curtains for Interesting Textures

In the above shot, we have a woman in bed who is presumably dead to the character removing the bed sheets.

While the lighting setup was easy enough to employ, originally it felt bland and lifeless, almost too artificial. Look around the room you are in now. If it is daylight and sunny, I’m sure you’ll find many shadows created from furniture, desktop items, the gap between the open door and so forth. The world is not a perfectly lit place.

We removed the net curtain from the window in the other room and placed it over a C-stand with a secondary light coming in from behind the netting. The final result gave us a much more textured and intriguing composition. 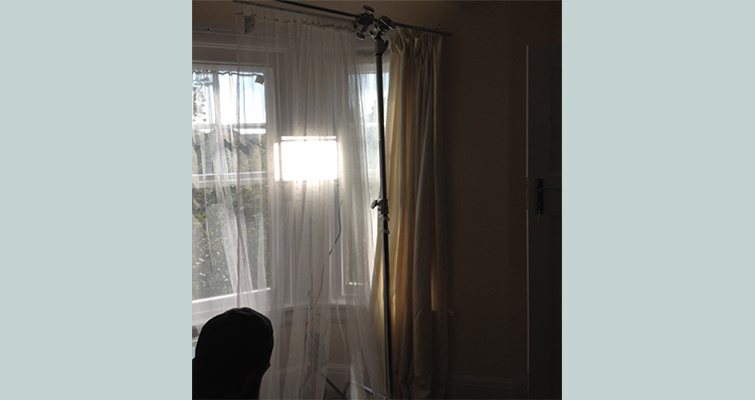 Likewise, taking a cue from Conrad Hall’s symbolic “crying rain” lighting* seen in 1967’s In Cold Blood (see the footnote at the end of this article), the netting was put to good use in the below shot. 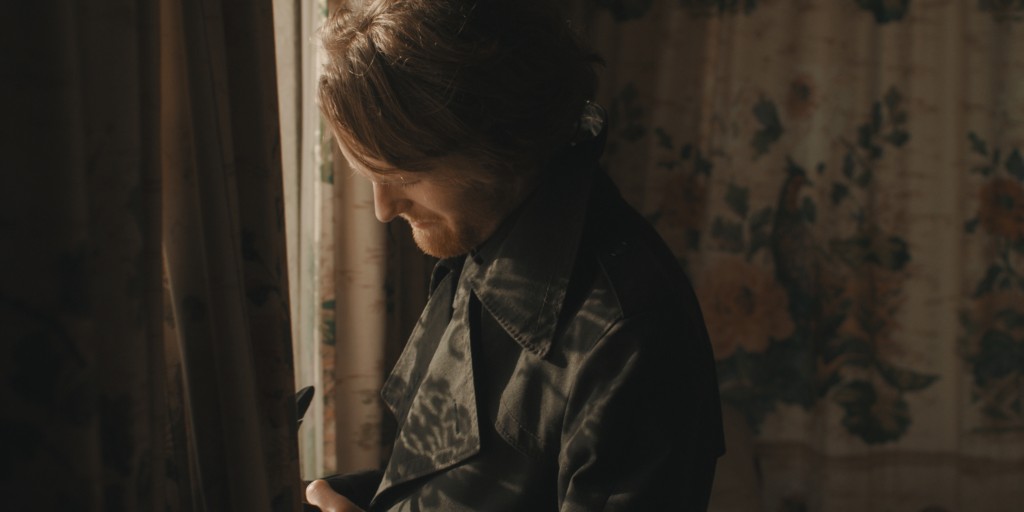 This character, a detective, is in search of a missing person who he has come to hold close through the case. His only clue was a white rose with her DNA on the stem.

Upon setting up the shot, we noticed the flower detail embodied onto the nets in the kitchen. We removed those and placed them on the formerly blank window. When the 2k outside was projected through the window, the netting created a flower-shaped shadow that appeared over the character’s heart.

By just looking around at the start of the shoot to see what the location could offer us, we ended up with a much more symbolic and fascinating image. All by complete accident.

2. Christmas Wrapping Paper or Kitchen Foil as a Bounce

The problem with passion projects is that when something goes wrong on set, there’s usually little that can be done other than to push on — no money, no time, no choice.

The issue we had with this shoot was limited storage space with transportation. We only had enough room to take the bare essentials. Therefore, the lighting design was prepared a week ahead of the production to work out what lights were needed and what we could leave.

Unfortunately, we could have done with an extra light. There was just too much shadow on one side of the actor’s face. It was making the mood of the scene quite mysterious and dark when that was not the intended tone, and moving the light into a different position would throw off the motivated lighting source.

A simple bounce board or reflector would have worked wonders to act as a fill, but there wasn’t one around. What we did have, however, was some Christmas wrapping paper. We trimmed a piece from the roll and taped it near the wall to bounce the kicker coming in from the back. Respectfully, it worked with perfect results.

3. Use Cardboard to Create Light Rays

Images via Warner Bros. and MGM

Don’t you just love the classic light rays you see in films such as Blade Runner and Skyfall? This effect is usually created by placing dividers, — such as blinds or window frames — between the light and the set. The objects blocking the light need to be thick enough to obscure enough light to make the individual rays noticeable. Alternatively, you can also have small individual openings in which the light coming through pierces the darkness of the set. It also works best when you expose for the light outside leaving your character in shadow if he or she is too far away from the source.

However, you might not be in a position where you have window frames, shutters, blinds, or whatever else can be used to create this effect. Nonetheless, with a little bit of cardboard, you can still create light rays. At the location where I was shooting just last week, were a few disposable MDF boards and empty cardboard packages. Using a screwdriver, we were able to punch holes through the material and tape them up to the window. 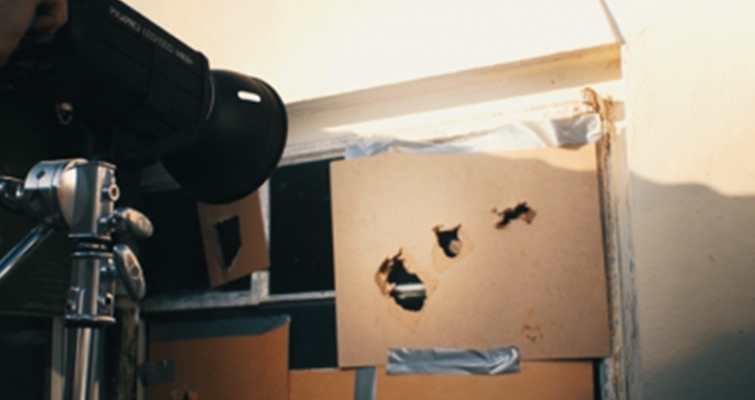 An LED with the same illuminance as a 2k light was placed outside to mimic sunlight. After a quick spray of haze, we were presented with beautiful light streaks.

4. Use Household Lamps to Enhance the Keylight

In the shot above, the ultimate aim for the cinematography was to try and achieve the same type of look found in a David Fincher film — a soft level of low-key light and a distinct color palette which runs throughout the entire composition. The above image on the right (via 20th Century Fox) is from Gone Girl.

The issue here was the space of the actual location. In short, there wasn’t any space. I was completely backed up against the wall with no space to move, the crew was outside of the door watching from a monitor, and the 300w had to be carefully placed outside of the kitchen and aimed through the banister of the stairs.

We were in a pinch and had to make use of the location we had. The problem was, because of the distance between the light and the actor and the lack of space to move the light forward, we were losing too much key light on our actor’s face. The end solution? A lamp and a can of tuna. 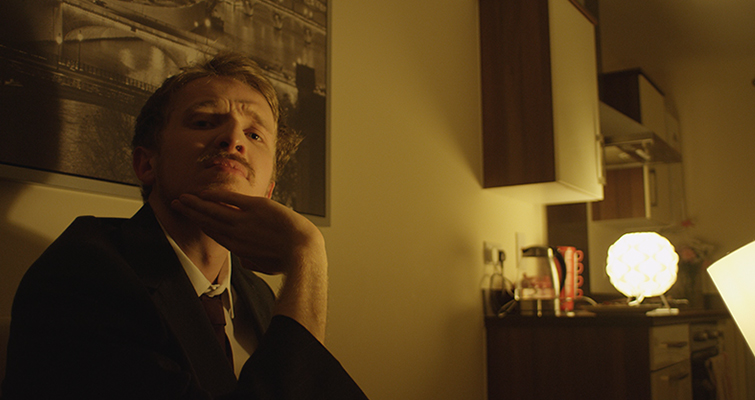 The household lamp at the top of the stairs was the same color temp as our 300w, and the cloth of the lampshade diffused the light enough to add a beautiful soft glow to the actor’s face. The can of tuna held the lamp at a particular angle. You can just see the light in the frame above.

At the end of the day, as proven in the Lord of the Rings example, a simple household item can save or make the scene, even when they are not planned to.

Do you have any household lighting hacks? Share them below.

* The following is an extract from 1992’s Visions of Light – The Art of Cinematography:

The scene where is about to be hanged, and he’s talking the chaplain. It was shot on a stage, and we had gutter over the top, and the rain was coming down, and I had a fan off to the side which wasn’t blowing the rain against the window, but blowing the spray from the rain against the window. The light hitting his face with this phenomenon happening on the window happened to hit his face one time when I was looking. So I went to Richard [Brooks], and I said ‘Richard, watch this on his face now.’… We did another rehearsal. Perry (Robert Blake) is talking about his father, he’s about to be hanged, it’s very sad. But, he played it very straight and emotionless. However, the visuals were crying for him. — Conrad Hall

Hall later goes on to say he has had so many cinematographers ask him how he did it. He explains that he didn’t conceive that shot, Richard Brooks didn’t conceive it, nobody imagined it at all. It was purely a visual accident. That’s the beauty of art in general — sometimes when something breaks or is utilized in an unintended way, something new and useful is created.