Editing a Film to Music (Without it Becoming a Music Video)

Music undeniably plays one of the most important roles in the post production process, as it can largely define your film’s style and tone. But choosing the right music for your project is just the beginning. 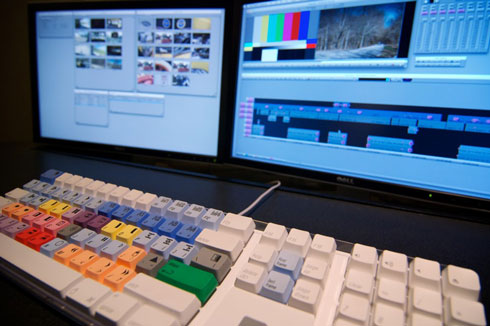 Every film will naturally have different musical and scoring requirements based on the nature of the project and the director’s preferences. Some incredible films have been made that feature little to no music at all, while other equally amazing pieces of work have a score running from start to finish. There is obviously no right or wrong approach when it comes to how much music should be integrated in any given film, or what type of score works best, as these are subjective creative choices that are made on a project to project basis. With that said however, there are some universal truths when it comes to editing your film to music that apply no matter what genre of music you’re working with, or how much score you have in your film.

In the past, the most common workflow for having a film’s score created was to simply lock the picture, hand it over to a music supervisor or composer, give your notes, and wait to get something back. While this is obviously still a very common approach, these days we are seeing directors and editors working with pre-existing and royalty free music in their editing sessions as opposed to going through a composer. This can be a very freeing experience when editing (and an approach that I myself have really grown to enjoy), but it does come with it’s own set of challenges. The biggest fundamental consideration is the fact that as a director or an editor, you may not inherently time, mix, and pace the music in the same way that an experienced composer, sound editor, or music supervisor would. In fact, it’s quite common in these situations for the final product to feel overdone, and almost music video-esque.

Don’t cut on the beat.

This first point is especially relevant if you are working with music that has a rigid percussion track, but can also apply to music without percussion that changes frequently. The general principle is that you never want to cut your film too closely to the beat of the track. Doing so will always result in a final product that feels like a music video. While not all music videos necessarily cut to the beat for every shot, many of them are cut in this way. And the moment that you start cutting your visuals too closely to the track it will start to feel like a music video.

There’s nothing wrong with editing a really important moment or shot to a big change in your music cue, but just don’t do it for every cue. Doing it once or twice in a sequence can work well, but doing it on every cut will start to feel redundant in most cases. Editing to the beat is tempting, but sometimes when you place your edit points just a few frames before or after the change in the song, it can evoke an even more powerful and organic viewing experience.

Know where to mix down your music.

Probably the most common music related issue that I see in indie films, is that the cues are so poorly mixed. One of the unforeseen challenges associated with cutting your film to pre-existing music is that you may end up doing a lot (if not all) of the post audio work yourself, and you may not inherently know how and where to mix your music cues. Often times, musically driven moments in independent films can feel lifeless as a result of the mix not reacting to changes in the edit.For example, there might be a 2 or 3 shot montage that bridges together two scenes (and the same music cue is covering both scenes), but the cue may not be brought up during that small break. This subtle, yet important oversight will immediately detach the viewer from the scene as they are expecting the music to really kick into full gear at that point.

The same issue can arise when a music cue isn’t brought down enough during a dialogue scene and the actors voices start getting drowned out. I’m always surprised at how many filmmakers just want to drop a track into their edit and find an ‘average point’ where the music sort of works, without mixing it up and down. This will always result in a final product that feels somewhat unfinished, so no matter what make sure that you level off your cues smoothly and purposefully so they work in tandem with your visuals.

Another music related problem that affects short and feature length films alike, is the overuse of music. There are certain types of films that can benefit from having a score run through the entire film, but in the vast majority of cases doing this can make the project feel like a really long music video. Like any other editorial tool that you have access to in the editing room, music needs to be used tastefully so that the film doesn’t become monotonous or over synthesized.

In my opinion, many films that have fundamental problems (whether it be related to the performances, writing, or subject matter), attempt to use music to cover up the issues and distract the viewer from some of the creative and technical issues that may be present. So if you’re in a situation where you are tempted to use music cues in every last scene of your film, I would suggest taking a step back and really asking yourself why you feel that’s necessary. Be very careful that it truly is the best choice for your story.