How To Record Quick Voiceovers In Final Cut Pro X

With FCPX, Apple has made several improvements to the built-in voiceover function, making it even easier to get live audio into Final Cut Pro.

Adding scratch VO or sound effects to your Final Cut Pro X project is a breeze.  The FCP Voice Over function (present in earlier Final Cut versions) has been updated with the now more appropriately dubbed “Record Audio” tool. Along with the standard options of the Voice Over tool, this new FCP function allows you to assign the recording to a particular event and gives you the choice to send out to an external audio monitor when recording.

How To Use the “Record Audio” Tool 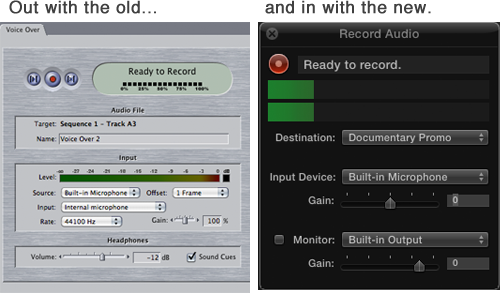 It might be worth mentioning one feature of this tool that Apple discarded in FCPX… the ability to choose your audio sample rate. Although I never took advantage of this function (I typically use the VO tool to create placeholders only) it might be a missed element for some users.

The Voice Over / Record Audio tool is one that I use quite often.  It’s perfect for experimenting with different reads and will help time out programs before any actual voice takes place.  Having to have professional voiceover reread because the script didn’t work with the edit is a huge drag, not to mention costly. Use the Record Audio function in FCPX to get a head start on your edit by recording audio placeholders and insure that the VO is a home run before it ever gets recorded.