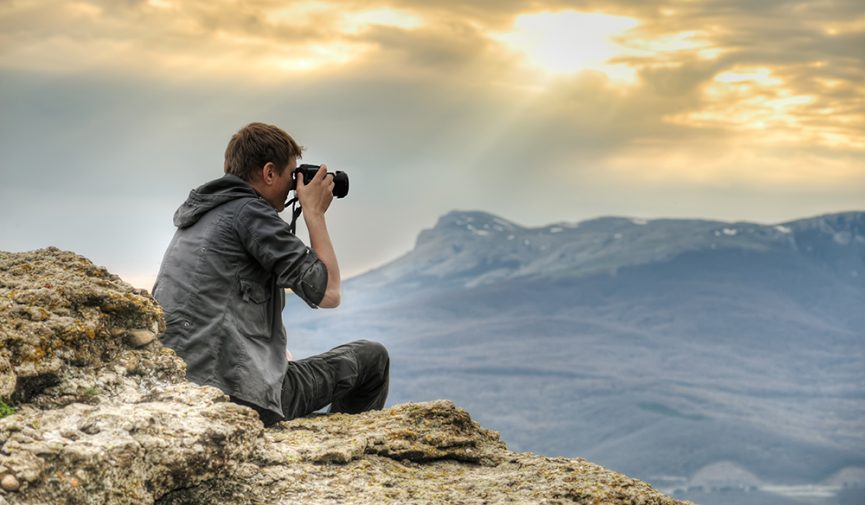 How to Make an Impromptu Shot Usable for Your Film

You stumble across a scene that would work perfectly in your film or video project — but all you have is your camera. How do you capture an impromptu moment without a tripod or other support gear and still make it look pro?

It’s crazy to think that the compact camera you keep in your backpack to take pictures of your dog at the park might also be the camera responsible for capturing stunt footage in the latest billion-dollar grossing blockbuster. It’s crazy, yes. But, it’s also true, thanks to the ever-increasing speed of industry innovation.

So, what steps should you take when something worth including in your next project suddenly appears during your day-to-day adventures? Obviously, you quickly grab the camera from your backpack, but you have zero of support gear  — no lights, no mics, etc. — so what next?

The following steps can help you obtain good clips in an impromptu setting. Of course, this will not be a one-stop shop for all improvised settings — these steps will work best for establishing shots.

Step 1: Dial in Your Camera Settings

I took the video above during a recent hike. The scenery was perfect for a project I was working, but, unfortunately, I only had my camera. No tripod in sight. Not only that, I was on an uneven surface with a slight wind blowing me off balance. Not the best situation to start with. As you can see, there’s a bit of camera shake, and it looks quite unprofessional.

Before hitting record, I increased the resolution from 1080p to 4k. Even though the rest of my project was being delivered in 1080p, it was crucial to capture this spontaneous shot in the highest resolution possible.

This approach will help greatly in post when it comes time to stabilize the footage. Additionally, this approach adds some wiggle room should you decide to include a pan or tilt. Lastly, take note — if you know there might be a chance of cropping your image, it’s always best to move back a little before you hit record.

Step 2: Stabilize as Much as Possible 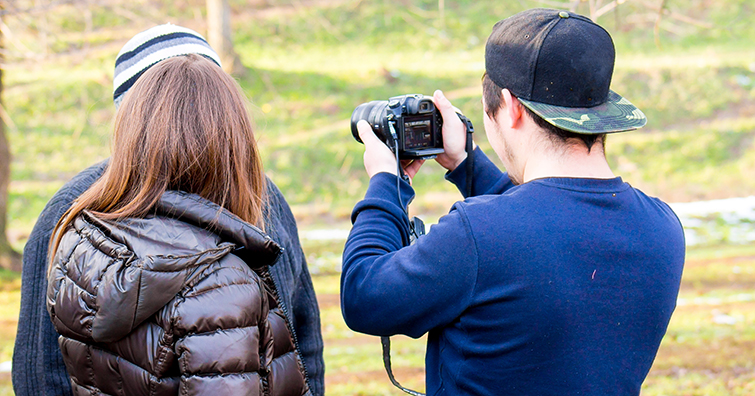 You could say that two of the core principles of a professional shot are stability and movement. A stable shot is going to look better than a clip that’s shaking too much. A moving shot, for the most part, will look better (or at least add more character) than a stable shot.

It’s important to note that there’s a difference between camera shake and handheld cinematography. When you hold a camera with just your hands, every step, vibration, and movement is transferred directly to the camera itself. The lighter the camera, the more kinetic energy will be visible within the footage. There’s no absorption to counterbalance the movement.

With larger cameras (or with cameras on a shoulder rig) you have several more points of connection with your body, and the energy of the movement is dispersed more evenly.

Because you’ll be running your footage through a stabilizer in post-production, your shot needs to be as stable as possible. Leave pans and tilts for post, too, as those kinds of shots are almost impossible to pull off handheld.

I would suggest resting your camera on your camera bag or the flattest surface possible. If you haven’t already, it’s always worth acquiring a camera beanbag. They fit in the average rucksack and are perfect for situations like this. 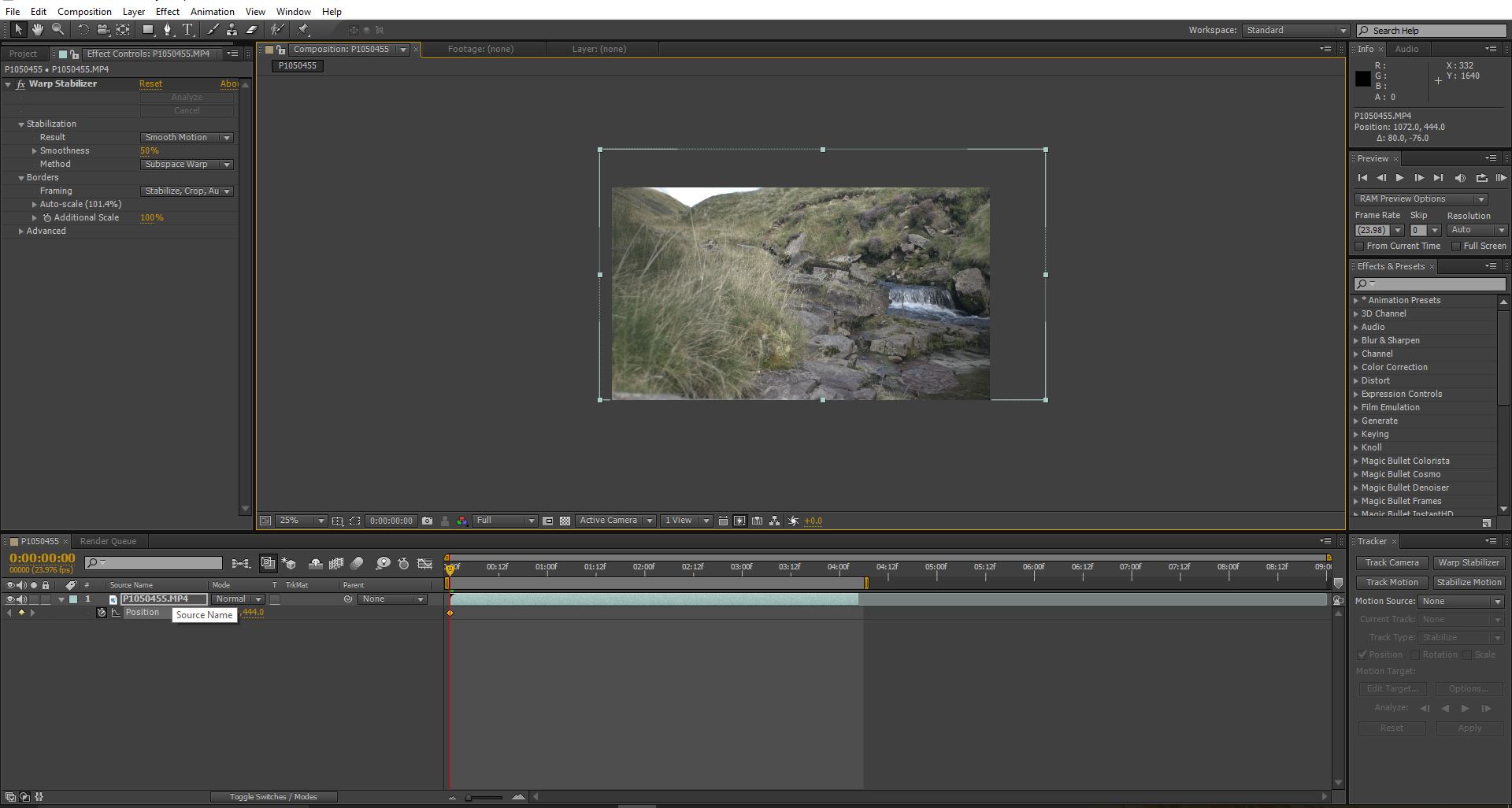 As discussed above, this kind of impromptu footage benefits greatly from stabilization. If you’re working with After Effects, here is an excellent guide offering several ways to do just that.

When your shot is fixed, you need to change the composition size from 4k to 1080p, and scale down your footage (as you can see in the image above). Leave some over-trim on the side or top if you want to include a pan or tilt.

To increase or decrease the scale of a shot/media file within After Effects, select a layer within your timeline and hit S on the keyboard. With the shot scaled down and selected, hit P on your keyboard to bring up the position control, and click the stopwatch to activate a key frame. Move your timeline cursor near the end of the clip, and then move the position of the shot according to if you are creating a pan or tilt.

To make the movement look more legit, change the end keyframe to an Easy Ease by selecting the keyframe and pressing F9. This will slow the movement down toward the end, instead of abruptly coming to a stop. 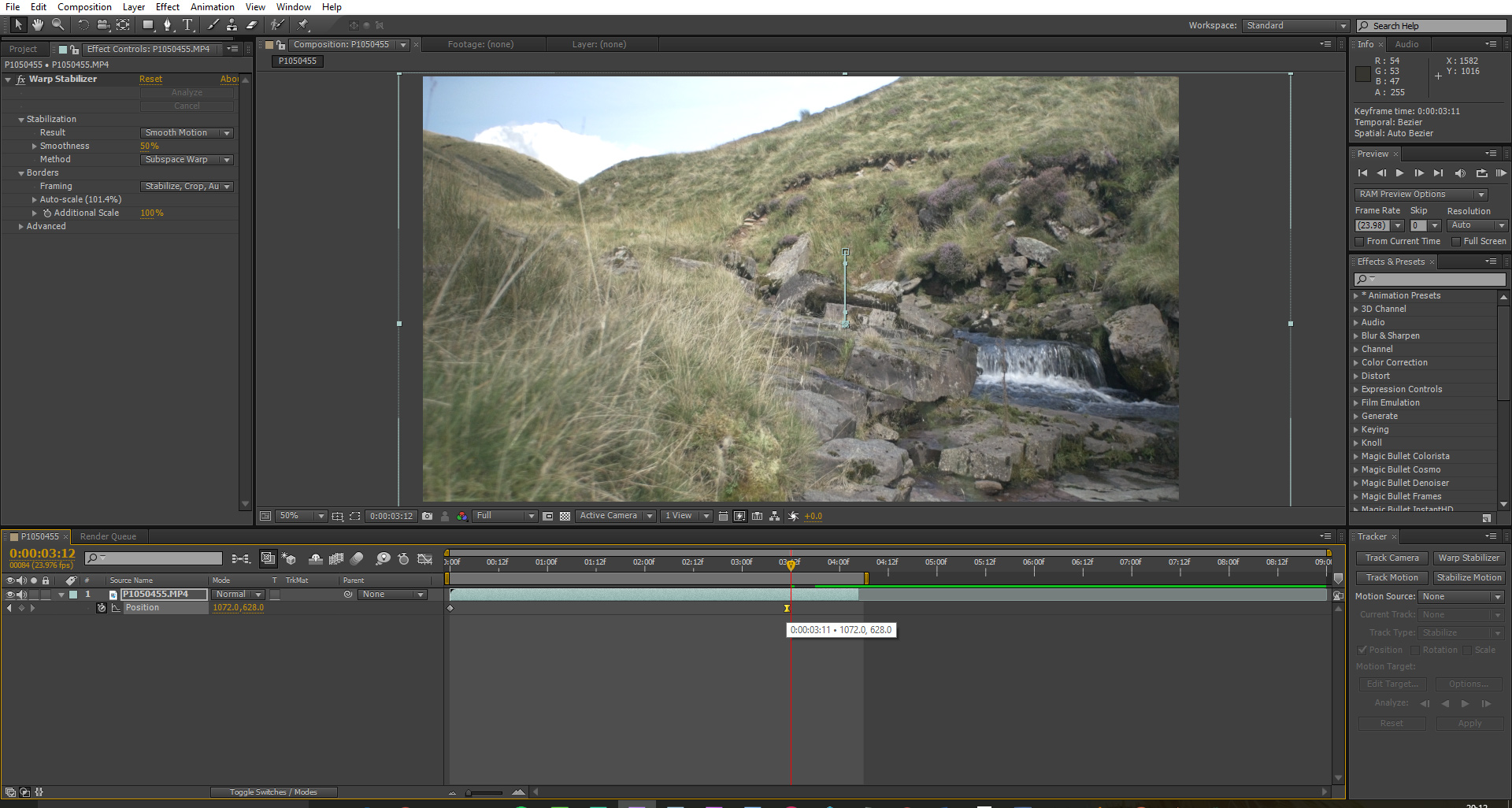 Finally, apply your color correction to match the sequence within your project, and you are good to go. Here’s the before and after:

As you can see, the shot has been transformed from something filmed spontaneously with no support gear into something that looks like it was shot on a tripod.

If your DSLR doesn’t support 4k or a higher resolution than 1080p, you can still achieve the same effect by using a 1080p letterbox rather than scaling the footage down.

So, to recap, take these steps to make impromptu footage look like it was planned all along:

Got any additional tricks for making impromptu shots work in your film or video project? Share them in the comments below!