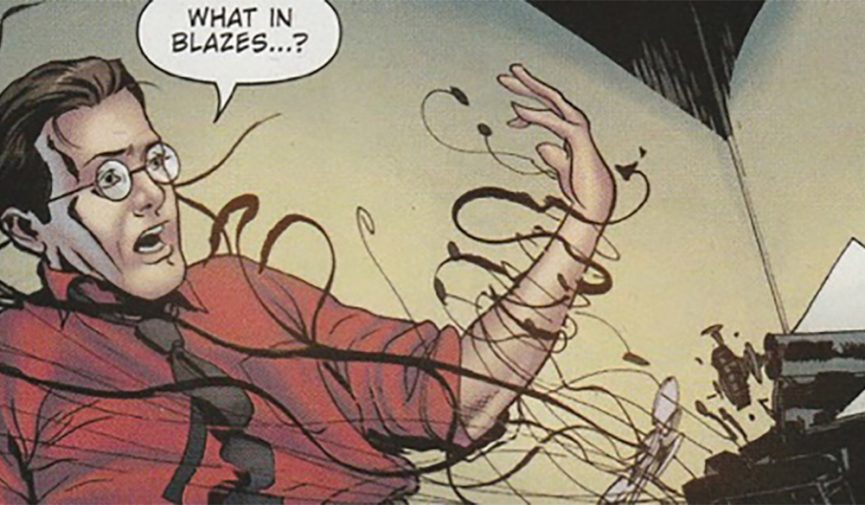 Interview: Animated Advice from Films to Comics with David Avallone

We talked to filmmaker-turned-comic-book-writer David Avallone about what filmmakers can learn from the comic book industry. 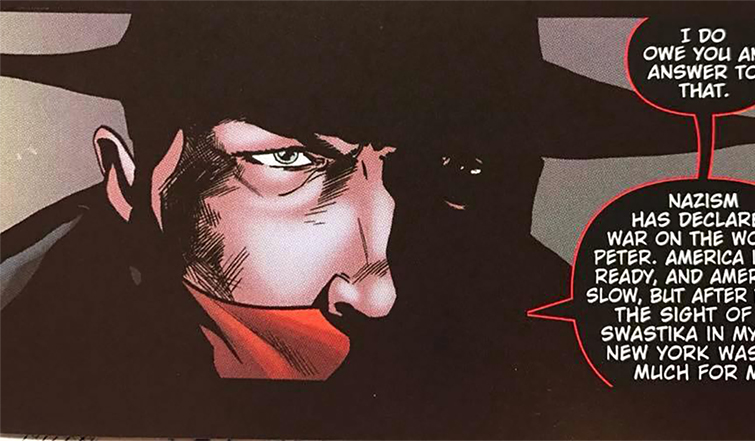 PremiumBeat:  There is so much awesomeness to unpack with you, but since you are a comic book writer, let’s start with your origin story and your parents, Michael and Fran Avallone. How did being the son of a pulp fiction novelist and feminist activist shape your art and politics?

David Avallone: It shapes everything I do. I freely admit that. My adult life is split between my father’s occupation and my mother’s, and I have no regrets or shame about that. If we want to veer into psychoanalysis and pretension I could break it down further. My father was a great storyteller and — without trying — he taught me the power of that. My mother was a committed activist, and never wavered in her dedication. For her it was a full-time job, and that’s not a thing I can do, but I think art — storytelling — has great power to change minds and move hearts, often without them noticing. So in addition to doing activist work with A Is For, it also informs my writing.

I should add that there are people who imagine that any “social justice message” in art has to be artificially added, tacked on. But that’s nonsense: all art is political. The story you choose to tell is a political choice, very often an unconscious one. I always sit down to write or make the best story possible. I am who I am, though, so what I believe and how I feel about the world is always going to be a part of the stories I tell. 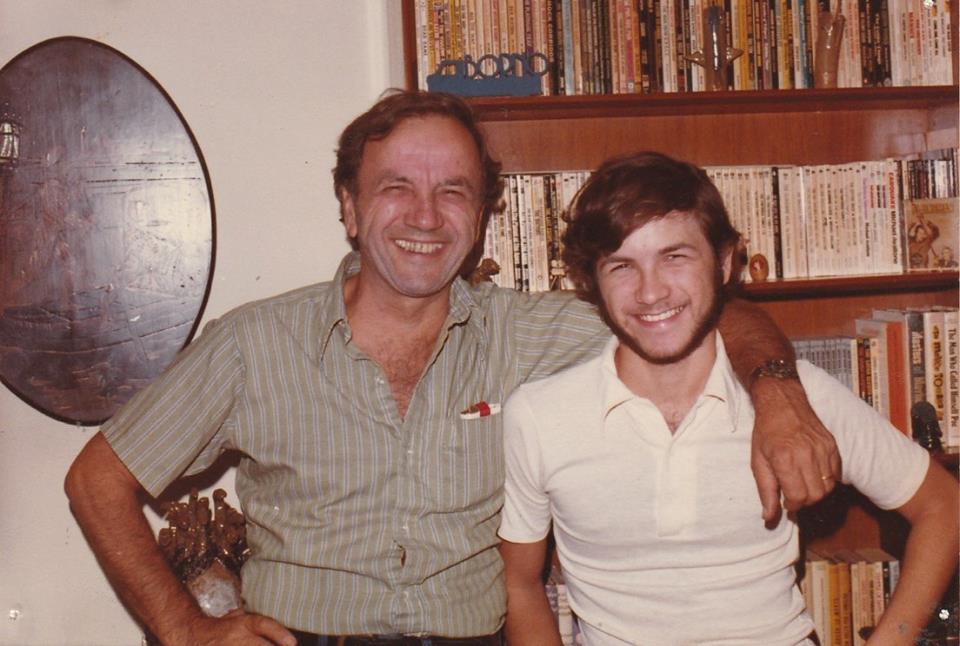 PB:  Another fun fact about you is your invention of a new religion! Could you explain “Kentism”?

DA: There’s a whole essay, but it struck me a few years ago that while I enjoyed “Christmas,” and have my whole life, I have never emotionally connected to the religion it rises out of. Add to that . . . I think the great weakness of religions is placing the fairy tale story above the message, and the need to believe the fairy tale is true. My idea was . . . what about a religion where we agree, up front, that the fairy tale is just that: a tale? We elevate the message above the “text.” Well, I find Superman to be an excellent messenger for, and symbol of, morality.

So for the past five years or so, my wife and I — and now some of my friends — celebrate December 25th as the day Kal-El’s rocket arrived from Krypton. Kentmas. (Earlier in December, we celebrate Kryptonukah, an eight-night celebration of the culture that gave rise to Superman. But that’s another story . . .) 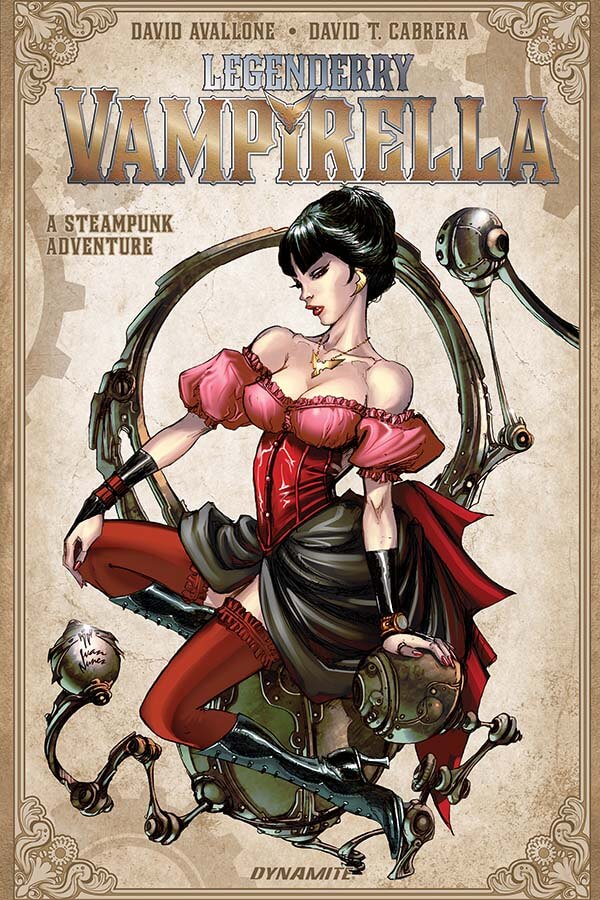 PB:  Coming from the film world, what is the greatest challenge when writing in the comic book genre?

DA: I’m not the first to make that transition, of course, and the boilerplate answer is “It’s easy! Unlimited budgets!” Except that’s false. A crowd scene doesn’t mean feeding 400 people . . . but some poor person has to draw them all. That takes time and energy, and I’m learning to keep all that in mind, too.

The greatest challenge, initially at least, was reading comic books and understanding how they work. (Scott McCloud’s excellent series of books on that helped enormously.) As a film person, I’ve spent my life watching movies and — even as a child — trying to understand how they were made and why they work. I had never looked at comics that way. I had always read them uncritically. As an example . . . when I started this process, I went back and reread a lot of my favorite comics. I picked up Alan Moore and Dave Gibbons‘s Watchmen. Almost every page is a nice panel grid. I had never consciously noticed that before. Darwyn Cooke’s masterpiece, New Frontier, on the other hand, is mostly three panels of widescreen cinemascope art on every page. Why? And what difference is made in those approaches? And when they break those patterns, what effect are they going for?

I was about 49 when I started writing comic books, and this radical career shift at that age was exhilarating. Learning a new medium, from scratch. I recommend it. And I love it now. 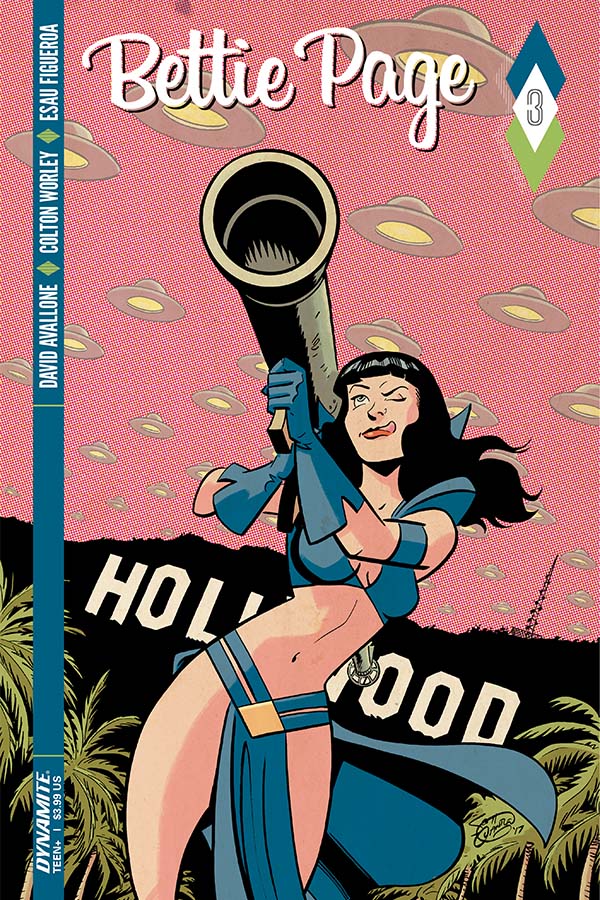 PB: You’ve scribed the steampulp adventures of Vampirella and gone retro with Doc Savage, The Shadow, and Bettie Page — as well as ghoulishly sexy with Halloween icon Elvira. Do the publishers determine the story, or do you pitch them?  What’s the process like when building an issue between publisher, writer, and art team?

I am contacted by the editor (for Dynamite, Joseph Rybandt is the senior editor, for example) who says (paraphrasing), “Elvira comic. What are your thoughts?”

Sometimes I ask for more clarification on what is wanted. In the case of Elvira, they just wanted something they felt accurately reflected her character, her brand, her style. So I go away and think about that. In this case, early on they got me the artist I wanted (my frequent collaborator, the amazing Dave Acosta), and he helped me out. He sent me covers of old Bob Hope and Jerry Lewis comics, which reminded me that Elvira is at least a little bit more of a comedy character than a horror character.

Given that Elvira started out introducing horror movies on TV, I thought about how you reflect that in the story . . . which led me to the time travel idea: Elvira meets the people who made the legends that have lived forever. Mary Wollstonecraft Shelly, Edgar Allen Poe, Bram Stoker, etc.

I wrote up a brief pitch, and it went to Dynamite and Elvira (aka Cassandra Peterson), who gave me the green light to proceed. Wrote the script and built up a bunch of photo reference for the artist, shared on Pinterest. I am fine with giving room for invention, but I have ideas about how I want things to look, and most artists appreciate the guidance. (For example, I thought it would be fun if Mary Shelley looked like Elsa Lanchester — who plays her in Bride of Frankenstein – rather than the historical Mary Shelley. So I uploaded a few photos of her from that movie, and Dave Acosta brought her to life, beautifully.) 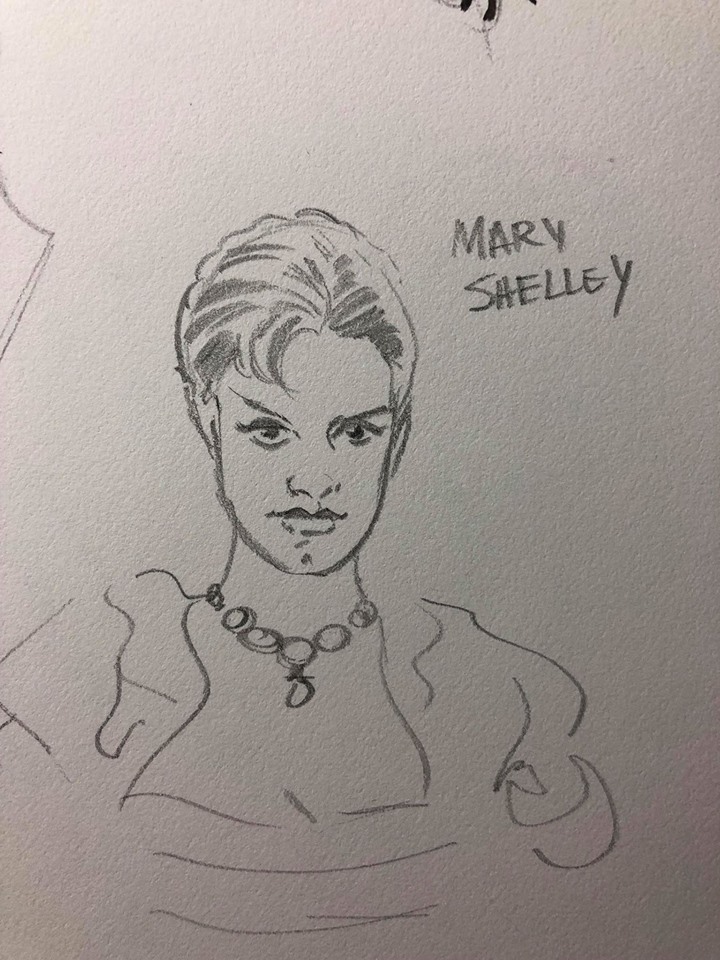 Dave sends me his penciled pages as he finishes them, just to see if things are tracking with what I wrote. 99 percent of the time my only response is “fantastic” or “perfect.” He then moves on to inking the pages, which I also get as they’re finished: sometimes a thing was vague in the pencils and takes shape in the inks, and I can see if I want to adjust it. After the inks are done, I invariably do another pass on the dialogue. Less so on Elvira than usual, because I’m writing it “tighter” on the first pass. Largely because it all has to be approved by Elvira, so I’m trying to get the jokes “right” the first time around.

Then comes letters (Taylor Esposito) and colors (Andrew Covalt), which I look at and “approve.” And that’s a comic book being made. 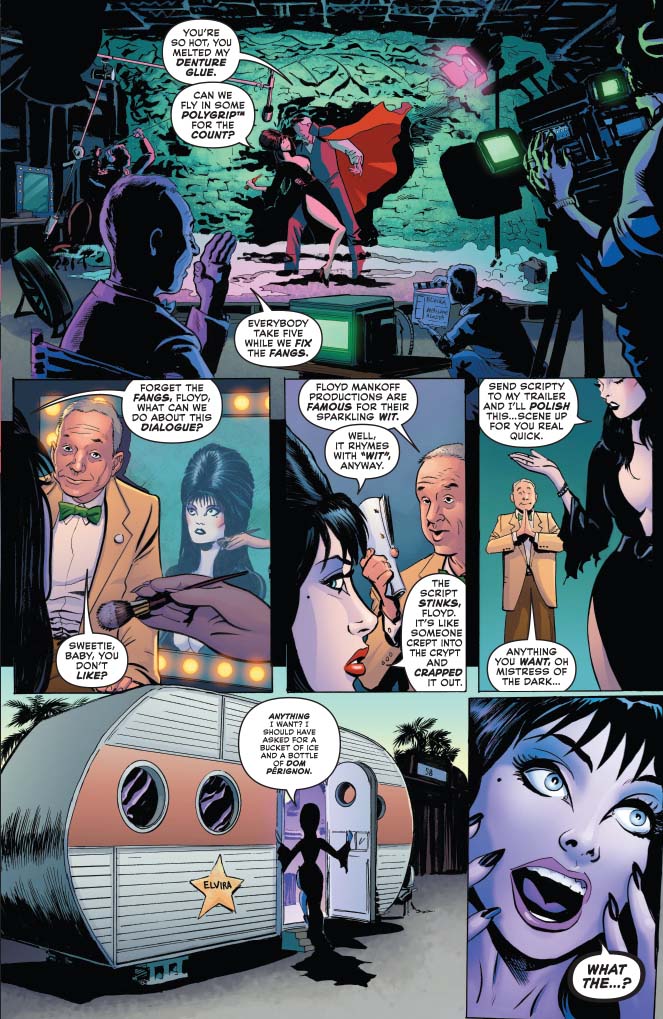 PB: You are a huge research guy. Do you go to painstaking effort for historical accuracy, or is there wiggle room for the fun/fantasy factor?

DA: A lot of the time, the research is the thing that leads me to the story. When the Doc Savage job came up, I thumbed through a history book for “interesting stuff in the thirties that Doc Savage might have been interested in,” and it reminded me of Amelia Earhart. Doc’s cousin Pat was a female aviator, and those were rare enough in the thirties that she would know Amelia. I made them more than friends, in fact, because I thought that was a particularly interesting story to tell. Had I not picked up that book, the series would never have been about Amelia Earhart.

So . . . long story longer . . . I try to be as accurate as possible. I am allowing myself more wiggle room with Elvira, because it’s a comedy. (See above about Mary Shelley and Elsa Lanchester for a good example of that . . .) 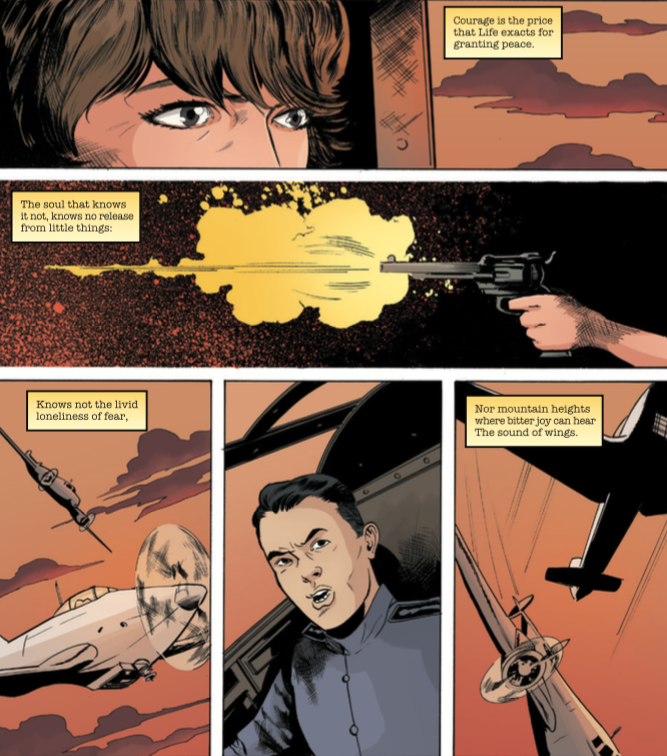 PB:  The newest project with Kevin Eastman (Ninja Turtles) was crowdfunded. Can you tell us about the process — both logistically and artistically — of making it happen?

DA: I met Kevin at Emerald City Comic Con, and we became fast friends. A few months later, at San Diego Comic Con, he pitched me this thing he’d been working on forever, and I came up with a new title for it: Drawing Blood. We actually developed it as a TV series idea . . . and I wrote a pilot script . . . but we both decided it would make a great comic book, and that was a thing we could do without having to ask anyone’s permission. So we did a Kickstarter, figuring that Kevin has a million fans, and I have a dozen, and between the two we’d raise what we needed to make the comic. As it turns out, the artist we hired — Ben Bishop — is significantly younger than us, and his fans, and his energy and understanding of Kickstarter and social media helped us enormously. Couldn’t have done it without him. We raised everything we needed and a bit more. The trade paperback of Drawing Blood should be at the printers sometime in late July. 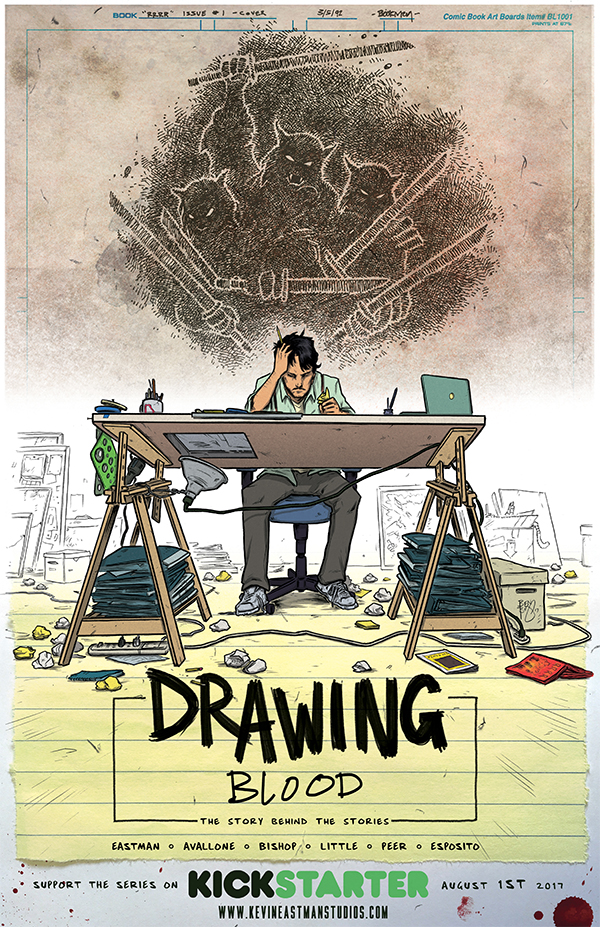 PB:  For someone starting out and dreaming about working in comics, what advice would you give them to get their foot in the door? Any general industry advice from your time in Hollywood?

DA: Always do your own stuff. For starters. Comics don’t require anything but your time and talent. Do a web comic. Do something original. Don’t just draw Batman. Show people that you can invent, too.

And then . . . come to conventions, and meet people. I guarantee there’s one near you. There will be pros at that con. Don’t be a stalker, but if you hang out (particularly in the closest hotel bar to the con) you WILL meet people who work in the industry. Be cool. Don’t push. Talk about things you like, things that excite you. Don’t talk entirely about their thing. They get that all the time. Kevin Eastman and I didn’t talk about the Ninja Turtles the night we met. We talked about old World War II comics from the ’70s we both grew up on. The odds are good that a creator you admire will share some enthusiasm you have. Make friends. Be pleasant and kind. It’s not a job interview: if you make them feel like it is, you’ve already lost them. 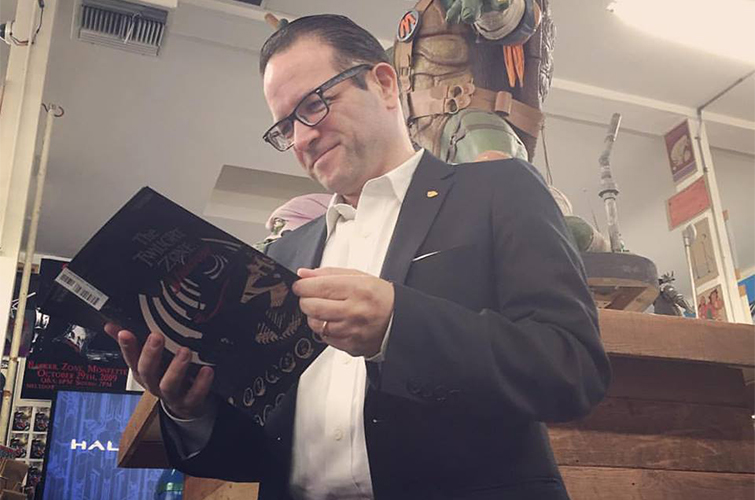 People complain, often, that industries like comics and movies are “all who you know.” Damn right. People like to work with their friends. Don’t you? So be a good friend. Support other artists and writers (and colorists and letterers and actors and filmmakers.) No one does it alone. We all grow out of a community. Find your people, be good to them, and it’ll all flow from that.