Filmmaking Tips: The Ins and Outs of Fight Scene Choreography

Choreographing and directing a fight scene is no easy task. There are many moving parts involved, and it all has to sync up and look believable. Even simple fights can be dangerous, so be sure you work with your stunt coordinator to execute every move as safely as possible — especially if you involve weapons.

As fight scenes often rely on some stunt work, start by checking out our earlier article “Low Budget Stunt Coordination.” 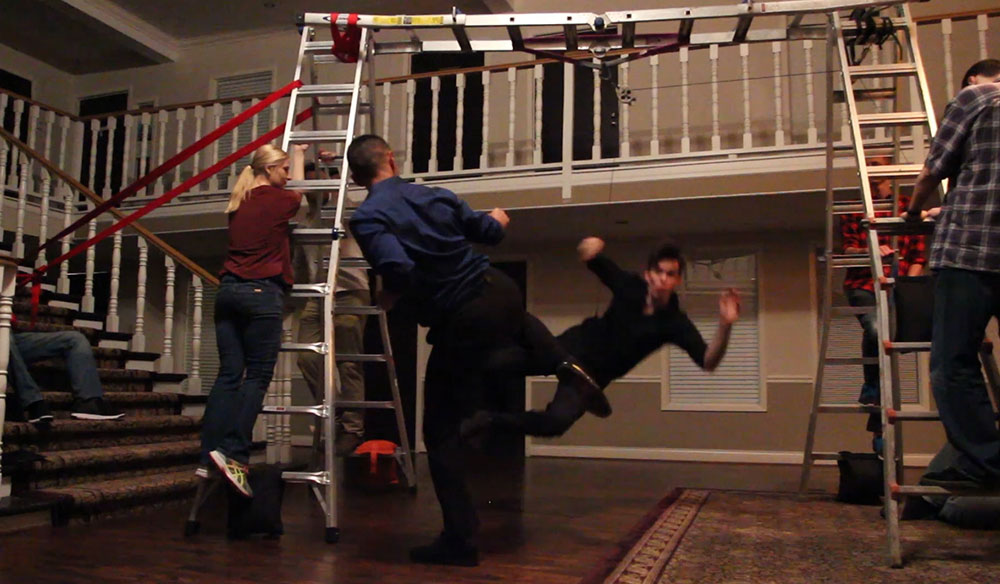 Now if your goal is to become a fight choreographer, then, if you haven’t already, start taking martial arts classes. You need a plethora of techniques to draw from to develop interesting exchanges.

This article will focus primarily on directing fight choreography, focusing on character background, fighting styles, and working with your choreographer. However, I’d still recommend taking a few classes (or even taking a few lessons from your choreographer) so you can get firsthand experience and learn to better communicate your ideas.

Your fight scenes need to be appropriate to your film’s genre. Unless you’re trying to make a ridiculous spoof, a Matrix–style kung fu fight scene in an English period piece would be completely out of place.

You also need to give your audience believable backgrounds or explanations for your characters’ martial arts skill levels. Was your character in the military? Is he or she secretly an assassin? Are they simply martial arts enthusiasts? Or did they learn to brawl on the streets? You need this information not only to give your audience a believable character and fight but also to determine how you choreograph their fight scenes.

Before getting into any specifics on fighting style, we need to touch on possibly the most important framework for a fight: motivation. We need to believe in the character’s motivation for the fight. Great choreography is meaningless if the audience doesn’t care about why our hero is fighting. One of the best examples of this is from Ip Man. Behold:

Keep in mind that no matter how realistic you want your fight to be, it’s always going to be staged. Rarely are actual street fights anything like street fights in films. They’re typically fast, dirty, and tangled with people. They’re not pretty, and it’s difficult to really make out distinct techniques. By way of comparison, conversations in real life aren’t as clean and crisp and to-the-point as they are in films, but they still feel natural and sound real. That’s what all fight scenes aim to do.

(An excellent example of realistic fighting comes from Fight Club.)

This fight simulates realism. It’s gritty, it’s rough, but you can still make out the moves. Notice how the fighters in Fight Club seem to be mimicking boxers and MMA fighters, but they don’t have truly proper form or technique. Maybe they watched some tutorials or took a karate class as a child, but these characters are not trained fighters. Their skill comes from pure trial and error — learning the hard way.

There are times when the characters punch wildly in the air, with no real discipline. They’re both antsy and a bit unfocused. They miss opportunities for joint locks or more advanced techniques because all they know is striking and backyard wrestling. A good base to draw on for the street fighter is basic boxing. The techniques themselves might not be fancy, but you can still make the fight interesting. Focus on tension and character motivation.

The skilled martial artist is well-trained and highly skilled. Maybe he or she came out of some military Special Ops program, or trained their whole life with an old master. But here we are still simulating a realistic fight, just with a touch flair and coordination to raise the stakes and intricacy of the choreography. Netflix’s Daredevil does this perfectly.

The fight is gritty and rough, but Daredevil clearly uses more advanced techniques than the street fighter —joint locks, throws, well-coordinated slips, bobs, and weaves. Occasionally, we see a flip, either as an evasion or to deliver a kick — thrown in for flair disguised as practicality. He’s still throwing punches in the heat of the moment, sometimes his form gets sloppy from fatigue or when he gets overwhelmed by opponents, but his skill and control shine through nonetheless.

Notice how all the fighters stop from time to time to catch their breath, but it never ruins the pacing of the fight. The tension actually builds, and it further simulates realism while maintaining a heightened choreographic style.

You can draw from any martial art here since your hero is highly trained; just make sure the style fits with his or her back story. The idea is that, despite their training, they’ll still get tired, their form will not be perfect after fighting for three minutes straight, and sometimes they may stumble and fall. Real fights aren’t graceful.

The master, however, is flawless and graceful. Think old Hong Kong movies or The Matrix. The techniques are crisp and beautiful. If choreographed well, even some of the more complicated and intricate techniques can look practical. The skilled martial artist can pull off basic and intermediate joint locks using someone’s elbow or shoulder when given the chance, but their techniques still rely on gross motor control; they must be able to execute techniques quickly and in the heat of the moment without thought.

However the master can easily pull off joint locks using the opponent’s fingers and is a master of fine motor control; they have laser focus, and adrenaline doesn’t slow their movements or self control.

The master-style choreography relies on fast and clean delivery of techniques and excellent stance and form. Your actors and stunt doubles need to really know the style and have excellent muscle control. Rarely does this character’s form slacken when they get tired.

When looking for a martial art, you can pick nearly any style. Find one with forms or katas, like Karate, Kung Fu, or even traditional Muay Thai (not the MMA style of Muay Thai). Choreographing this style really requires your choreographer to have a strong grasp of the style’s traditional forms — and their applications.

A key component to engaging choreography is flow. Notice in all the examples, the fighters don’t start and stop. Yes there are moments when they may pause to catch their breath or exchange dialogue, etc.; however, they don’t just stop after a technique or two. Check out the video below to see what I mean.

(Forgive the obnoxious slow motion in example one; it was a John Woo parody.)

In example one, after nearly every exchange, we just kinda stop dead in our tracks. There’s no real tension built — it just slows down. It’s like watching an old-school, turn-based RPG but without the excitement of playing it. However, in example two, the pacing is much faster, and the tension continues to build. The characters must adapt during the fight to overcome the opponent and outsmart them.

Also pay attention to the number of techniques per second. In example one, there are maybe two or three. In example two, there are about five to six techniques per second! Regardless of the style of choreography you choose, you’re always simulating real fighting to some degree, and real fights are fast! Whether it’s a street fight with basic jabs and hooks or masters battling it out with secret techniques and finger locks, you need the fight to move fast — and keep moving!

Play around. Experiment. Work with your choreographer on what styles best suit the story and the characters, and build from there. But choreography is just the first step in a good fight scene. Once you have the fight planned, you’ll eventually have to shoot it. For some tips on shooting the fight, refer to our earlier article on directing fight cinematography.