Directing Fight Cinematography: The Right Way and the Wrong Way

Choreographing a fight scene is only half the battle. If your audience can’t tell what they’re watching then all those beautiful techniques mean nothing.

In the action film genre, the Jason Bourne franchise has created some controversy. You have diehard fans proclaiming that the series is one of the best there is in the action genre, and then there are those who say that when Paul Greengrass took over the series, he inadvertently ruined Hollywood action cinema. There are a few who will stand by Greengrass’s decisions, such as the video editorial from Insider, arguing that those mimicking him fail. However, while I can appreciate what he was attempting to do, ultimately Greengrass creates a visual mess, and it’s more than just shaky cam.

Let’s take a look at what exactly creates this visual mess and how to avoid making the same mistakes.

Check out this fight scene from The Bourne Supremacy.

If you slow it down and take note of what’s happening, than you can arguably say that the choreography is very well done. Interesting and gritty techniques grounded with a sense of realism and Bourne’s trademark adaptability — and good, believable pacing. However, we lose the choreography for several reasons. The first thing that stands out is certainly the shaky cam mixed with tight close-ups. It’s disorienting and confusing; you feel like a drunk falling onto two other people fighting. But more than that we lose our subjects because of the lighting and the costuming. 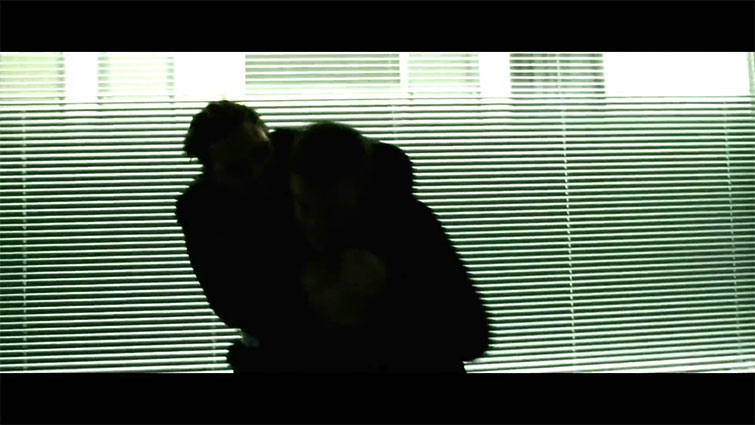 Image via The Bourne Supremacy (Universal).

Both characters are dressed all in black, and when they’re up against the bright venetian blinds, we lose any distinguishable features. The angles are all wrong, so we’re constantly looking at one person’s back instead of seeing most of the techniques play out. The two become this black amorphous blob.

The more traditional style of shooting fight choreography is wider shots and longer takes — and of course lighting the scene well enough to actually see who is who and what is happening. Take, for instance, the intense and beautiful choreography and cinematography of the final fight from Jackie Chan’s The Legend of Drunken Master.

Note not just the wider shots and longer takes, but really look at how the choreography plays out for the camera. As I mentioned, a major problem with the Bourne vs. Jarda fight was how the two fighters were staged within the frame (their backs almost always covering the techniques and creating that amorphous black blob). Simply reshooting that fight with wider and longer takes wouldn’t be enough to fix it. You need to be conscious of how your choreography plays to the camera. It’s like dinner tables in a theater performance: no matter where someone sits at the table, the whole audience can see all of their actions and facial expressions. You need your choreography to play believably to the camera.

Understandably, new directors want to stand out and use the camera in new ways. I understand what Greengrass was trying to do: create a more frantic, kinetic feeling to enhance the fight scene. This is still possible, but there needs to be a balance between high-energy camerawork and a clear presentation of the fight choreography. An excellent example of this is Gareth Evans‘s The Raid: Redemption.

The camera is far more active than in traditional fight scenes, often moving with a fall or kick, yet we never lose track of the action. And even in a dark, gritty environment, the lighting and costuming allow us to distinguish the characters, and the angles allow us to clearly see the exchange of techniques. We can experience the intricate choreography while seeing a fresh and seemingly chaotic approach to fight cinematography. Evans’s approach is a way to enhance the experience while Greengrass’s attempt hinders it.

Putting It All Together

Choreograph a short fight scene, play with the angles and camera movement. Experiment with how far you can push an idea to find the right balance. Keep playing with new ideas and how certain angles or movements best capture and convey different fighting techniques and exchanges.

Finding your own unique style of shooting fight choreography takes experimentation. Whether you’re looking for a more classic approach or seeking to find something gritty and frantic, pay attention to your framing, angles, and how your characters’ wardrobes work with the lighting and their techniques to play to the camera. That way, no matter how steady or dynamic your camera movements are, your audience can follow the action.