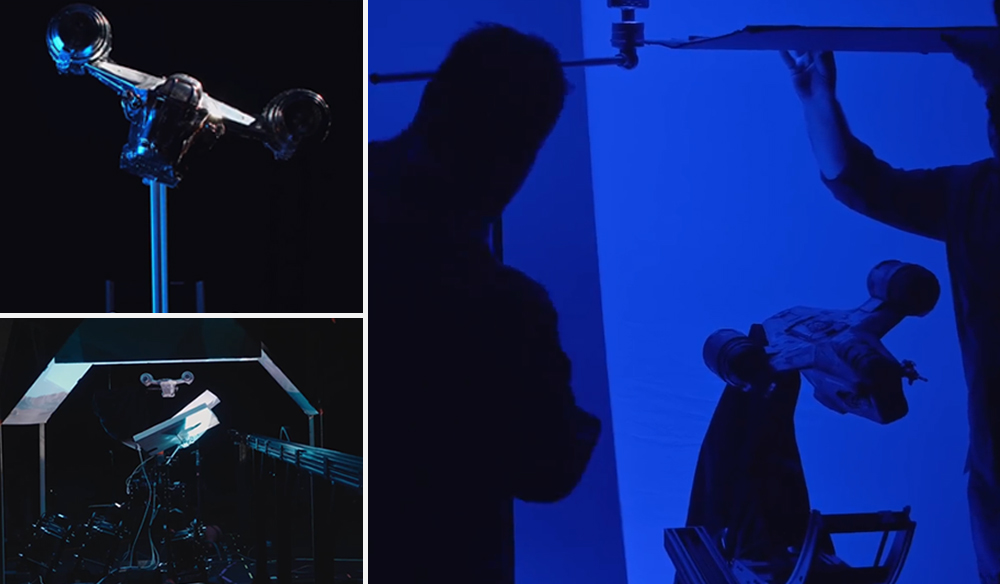 The Mandalorian turns to a tried-and-true special effect — hand-crafted miniature models. Here’s how they did it.

While you’ve likely seen the hundreds of articles on how the Mandalorian’s pioneering Volume pushes the boundaries of onset capture in front of live digital sets, longtime special effects artists at Industrial Light and Magic (ILM) also turned to some old-school Star Wars tricks.

Let’s see how the creative geniuses at ILM turned back to the classic Star Wars special effects that made the original films so captivating.

The Mandalorian’s ship, the Razor Crest, was initially concepted and then modeled in 3D.

Small ships were printed for use by the production team to not only finalize the look of the ship, but to help with things like determining the size and layout of the ship itself.

This would be used not only in VFX but also on set where portions of the ship would be built in the studio.

Series creator Jon Favreau and director-friend Guillermo Del Toro had once had a conversation where Guillermo jokingly said that if the films he was making created models, he would get to keep them to display in his home.

I learned from Guillermo del Toro, if you build a miniature, you get to have it in your house for a prop… and so when we were talking, what about just having a reference Razor Crest for some of the lighting.

That inkling of idea would evolve as the creative team considered having a production-scale miniature made to actually film sequences with.

In an interview with Adam Savage on Tested, longtime ILM modelmaker John Goodson recounted the many times he had heard that a production would want to use a physical model, often until producers realized how expensive it would be.

We’ve talked about things like that in the past, and its a nice idea and people love it, but it just usually never gets off the ground. So I thought this was another one of those… great, sure, that’ll just fall off the back… Then we were actually doing it and it was kind of a shock.

Approval was given to manufacture a camera-ready miniature, and ILM Chief Creative Officer (and industry legend) John Knoll got to work planning with the team.

After seeing the number of shoots needed and the type of shots, production immediately began on both a physical miniature model of the ship itself, as well as a custom-made motion control rig and track to capture the footage.

The two-foot long Razor Crest model was printed piece by piece in a 3D printer. As soon as parts were completed, they were immediately handed off to Goodson who was in charge of assembling the on-camera model.

The 3D printed pieces were so fragile, there was no way they would hold up in construction, let alone on set. The print was fully assembled and then John Goodson created a two-piece mold from that initial print.

From there, the ship was meticulously finished and electronics were added for effects like the engine thrusters.

The model makers also had to take into account how the ship would be attached to stands and the motion capture rig for filming.

Secret compartments we added to the front, back, and side of the ship so they could achieve the many shots they needed to capture.

Fun fact — the miniature itself was not yet finished when the first set of shots were needed to be delivered. Favreau wanted to tease the series and callback to classic Star Wars techniques by featuring a shot of the miniature in action during Star Wars Celebration.

Die-hard fans would be treated to a sneak peek into the production of the series, but that also meant that timelines were sped up by five weeks.

The tease was a huge success when it premiered live, so much so that the producers looked to add additional miniature shots to the series.

To capture these shots, ILM CCO and VFX Supervisor John Knoll manufactured a custom motion capture rig and track system in his home garage. A Canon DSLR would be mounted to a custom-made system.

The Razor Crest model itself would also sit in a custom “cradle” that would allow the team to film the ship not only from multiple angles, but also allow them to capture movements of the ship rolling.

Knoll not only constructed the system, but coded all the software necessary, while relying on some old school hardware to help control the system.

While not officially revealed, Knoll has teased that he has since improved on the control system, meaning that fans are likely to see more of the miniature in action in season two of The Mandalorian.

Finally, while the actors on set in the Volume relied on new digital backgrounds surrounding them during filming, the Razor Crest got its own custom set the team dubbed the “gazebo.”

This classic projection setup was used to place authentic reflections on the Razor Crest’s exterior. This would allow them to place the model in different environments so that the physical miniature would comp beautifully into any digital set.

While Favreau had previously mentioned that the model would help with lighting, I don’t think he had envisioned on just how true that was. Knoll even admitted that the VFX team benefitted tremendously because they could reference an actual ship. This allowed them to create an even better looking digital ship for the series.

For a deeper dive into this project, watch this wonderful behind-the-scenes documentary from ILM.

For even more in-depth model talk and camera-system nerdery, check out this interview with Adam Savage on Tested, featuring his conversation with ILM’s John Knoll and John Goodson.

All images and footage via Industrial Light and Magic / LucasFilm / Disney.