One little known audio tool in Final Cut Pro X is Match EQ, a quick way to match sound properties from one clip to another.

Ever sat down to edit and had major audio inconsistencies from shot to shot?  Maybe a scene was recorded over the course of a few days and something about the audio setup changed each day.  Perhaps two different sounding mics were used to capture the audio from multiple characters or interviewees.

Inconsistencies in the sound of your audio is not only unprofessional, it’s terribly distracting.  You could manually tweak the EQ of the different audio clips to try and obtain a common sound.  For Final Cut Pro X users however, there’s a better way.

The Final Cut Pro X Match EQ function takes much of the ‘guess work’ out of matching the audio between shots.  Taken from Apple’s more robust Logic audio software, Match EQ quickly applies the audio qualities of one clip to another. 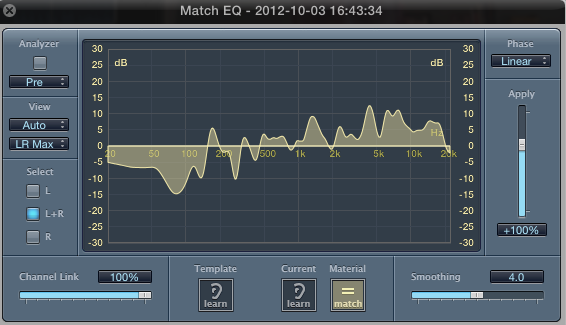 In the following video tutorial Sam McGuire from CreativeCow.net, you’ll see that using Match EQ in FCPX is almost as easy as copying the audio qualities of one clip and pasting them on to another.  Of course, there’s more complex customization you can apply (smoothing, modifying frequencies, etc),  and Sam will touch on those adjustments as well.

The audio tools in Final Cut Pro X are far superior to previous FCP versions, with Match EQ being a robust and welcome addition.