4 Awesome Music Video Visual Effects — And How to Recreate Them

Travis Scott’s music video for “SICKO MODE” inspired us to recreate some of its truly awesome visual effects. Here are our four favorite.

Over the weekend, Travis Scott dropped the highly anticipated music video for his hit single off of “ASTROWORLD,” his new album released earlier this year. After only being online for three days, the view count is currently at 12 million — and climbing. This video is full of incredible effects and visuals, putting the city of Houston front and center through a distorted lens of crazy colors. (Note: some of the content is explicit.)

Now obviously, this video had a large budget and a huge team that worked on it, so you can’t really recreate all of these effects (unless you want to rent your own horse to ride through the streets). So, we’ve gathered four effects from “SICKO MODE” that you can recreate on your own without too much hassle.

This effect, by far, was the effect that stood out to me the most. It’s one of the most interesting ways start off a music video. It’s not really an effect I have seen out there before, but the minute I saw it, I instantly wondered how the filmmakers created it. So, here’s what I think they did. 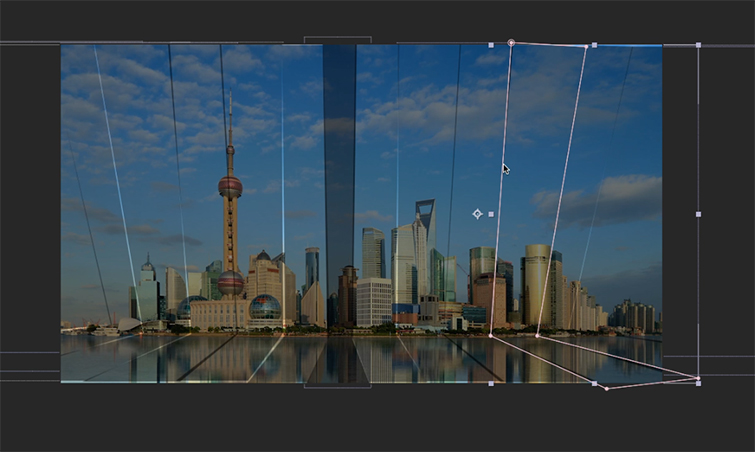 It all starts with a series of adjustment layers. Import some footage into AE, and create about eight adjustment layers that are angled at the horizon, growing bigger the farther from the center they go. Once you have all of your masks in place, create your desired color effect in Lumetri Color on the middle adjustment layer. Create a keyframe sequence that makes it turn on and off for a few frames. From there, go down the row and paste the effects in sequential order, so it looks like the light is traveling down the path just like it would on a marquee sign.

Now obviously mine is an incredibly basic version of the effect in “SICKO MODE,” but you get the idea. If you want a more detailed color change, or if you would like even more effects to travel down your train of adjustment layers, you can always keyframe those in as well if you have the time. The adjustment layers are just the foundation for creating more intricate versions of this effect.

Datamoshing is a super-interesting way to blend footage together, or an attention-grabbing way to transition between shots. It manipulates pixels within a frame and corrupts them on purpose to create a trippy effect that blends two shots together through ghosted pixels. If that made absolutely no sense to you, here’s a video to help you out:

In “SICKO MODE,” the filmmakers use the effect to transition between different sections of the song, using the power of the “melting” effect.

When Drake introduces “Young La Flame” at the end of his first verse, there’s an effect where the camera is shaking while Drake’s head stays in the center of the frame. You may have also seen this effect when Pennywise runs towards the camera in It:

Now this effect is actually pretty simple to do — literally one button-simple. Record some footage of someone moving around while you shake the camera back and forth, side to side. Import that footage into After Effects.

Once your footage is loaded onto the timeline, all you have to do is press “Warp Stabilizer” in the Tracker tab. This will track the movement of your shot and center the head in the middle of the frame.

If you don’t want the image to get cropped, you can also go into the Effect Controls tab for the Warp Stabilizer and change the Borders tab to “Stabilize Only,” then scale from there.

If you want to create a wild, colorful aesthetic, sometimes colored smoke is the perfect tool. In the music video above, Drake is surrounded in red smoke, and the cloud envelops a house. This smoke effect is not digital; it is a very simple analog effect that uses smoke canisters. This may seem pretty obvious, but if you want to recreate this effect, here’s a video that will help you use smoke safely and effectively.

Looking for more video production tips? Check out these videos.