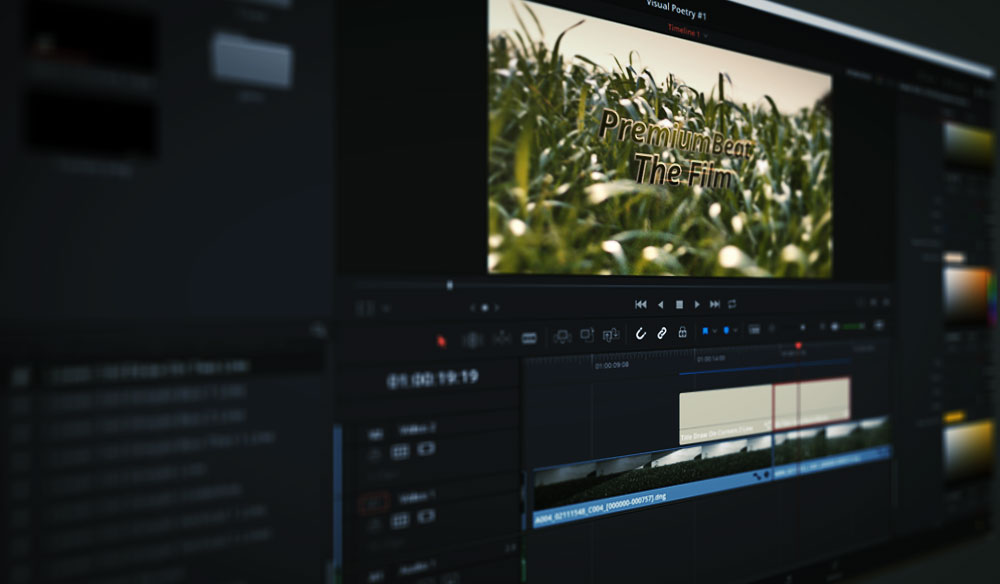 In this NLE showdown, we compare the text and title generators in Adobe Premiere Pro and DaVinci Resolve — and there’s a clear victor.

Earlier this year, I attended London’s VidCon with Blackmagic to demonstrate Resolve to the passing youngsters — or as many companies view them, the customers of tomorrow. Both Adobe and Blackmagic had a presence at the convention to promote their software to the up-and-coming content creators. While many young creators care little about 12-bit footage and RAW, they do long for quirky text functions. As I hear every weekend from my ten-year-old nephew, “Uncle Lewis, can you make me an intro for my YouTube channel?”

So, how does each program measure up when examining title generators, built-in text effects, and pre-made presets?

I will openly admit that I don’t like how DaVinci Resolve handles text. This is from my write-up Is DaVinci Resolve’s Title Generator a Hit or a Miss?:

I love Resolve. It is, after all, a world-class color grading application, and the designers have made massive improvements with the NLE’s capabilities in 12.5 and in 14. However, the title generator is only standard NLE quality, despite a great-looking UI. It is great for simple location introductions, or to fade the name of an interviewee in and out. But for anything that is slightly creative, you’re better off working with a dedicated motion-graphics compositor.

My main frustrations involved trying to do anything creative with text in Resolve. For example, in the still below, I have two text layers (because you can’t change the font size of one line in a simple fashion). One using the standard text generator, and the other using Text+. I’m able to move “The Beat” freely by simply selecting the text within the timeline viewer itself and moving the text to a new position. The PremiumBeat text, however, isn’t as easy. I must first select the text, then activate the transform tool, then move the text. 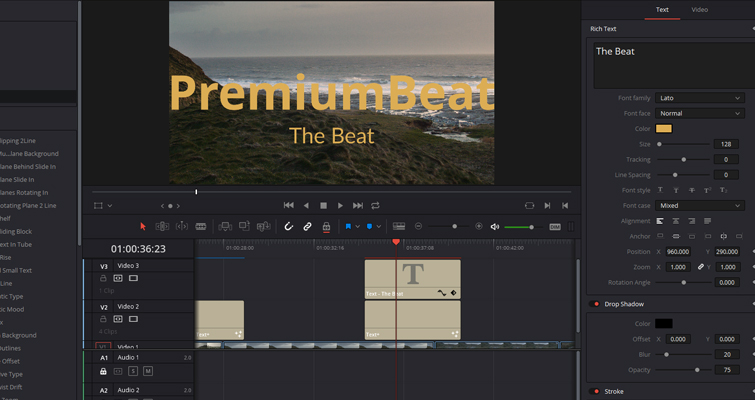 Text+, which builds the text from a Fusion source, rolled out with Resolve 15, adding a number of creative controls with how the text operates — from animating the text with a write-on effect to rotating the text in z-space. Text+ also offers a lot more design choices by allowing you to adjust the shading of the color and the properties of the appearance, such as making the font appear as just a text outline. 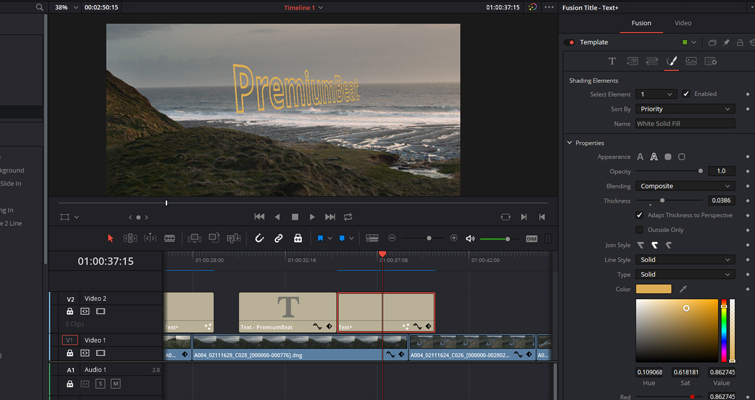 However (and again) frustrations arise when you realize that not all individual parameters have a reset function for when using Text+. And, even if you were to click Ctrl-Z to undo the action, nothing happens. It will only undo movement and font changes.

From having to click through several menus to change specific properties of the text, to the tedious process of having to select the text on the track before changing the position in the timeline monitor, it’s not a fun process. We can’t forget what is perhaps everyone’s main grievance with Resolve and its text: when choosing a font, you don’t see a preview of the font’s design. You have to scroll through each font manually. (A Blackmagic representative stated in the Resolve Facebook Usergroup that this will be changing in the future.)

While I have grievances with the simple text elements in Resolve, several 3D and 2D title presets were included with the incorporation of Fusion, last year. With these new titles, you can quickly drag and drop pre-made 3D custom titles to spice up your footage. Perfect for the content creator on-the-go.

However, it does appear as if these presets are hard-baked into the software; therefore, you can’t customize the properties outside of the color elements.

Many Resolve functions adjust with sliders rather than numerical inputs. While this isn’t inherently a negative attribute, I do find that the sliders respond a little too extremely. The slightest movement to the right can increase the text by 100 percent when you only want to move it 5 percent.

It’s no surprise that the company behind Photoshop offers an excellent text function in their editing software. A few years back, they removed the “add text object” and added a type tool similar to Photoshop. Being able to hit a keyboard shortcut (T) as opposed to opening the effects library, finding the title generator, and placing it onto a track is a lot more organic. And, if we want to talk about fluidity, the ability to just click on the text to move it is effortless. Of course, being able to adjust the size, font, and color of two lines of text in a single text object is a godsend. In Resolve, both lines of text would require separate text objects. 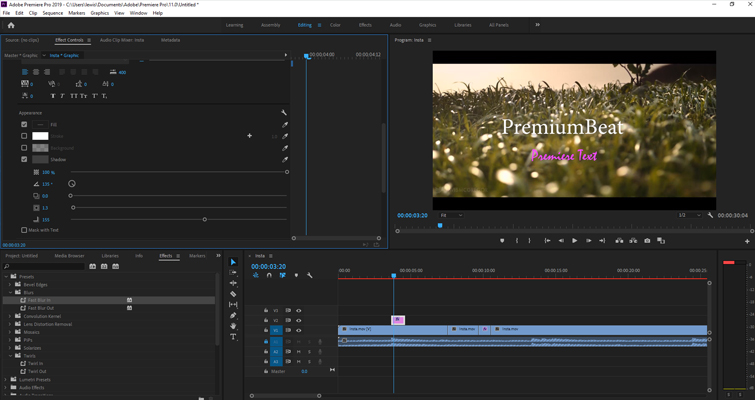 Unlike Resolve and After Effects, Premiere doesn’t offer any built-in 3D text presets. As such, you would need to import them from After Effects. However, (and again) unlike Resolve, you can apply a vast number of video effects to the text object in Premiere — from transitions to the video effects themselves. In Resolve, if I were to apply a glow effect to a fusion title, it freaks out. (Although, it’s essential to note that you can apply effects to Fusion titles, but it has to be on the fusion page and added with the fusion effects.)

If there’s one thing about Resolve that irritates me more than the text tool, it’s how it handles keyframes on the edit page. Whether audio, video, or text, keyframes are adjusted on the clip itself by opening the keyframe panel on the track. In Premiere, we have a separate window within the effects controls, which makes the process smoother and more efficient when animating text properties such as size or rotation. 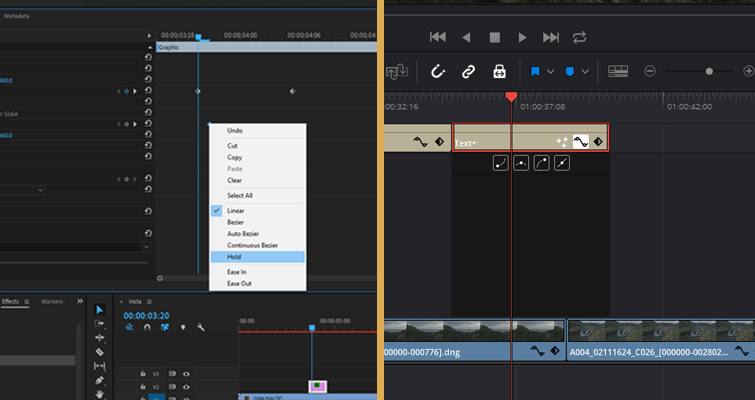 I’ve been trying to conjure something snarky to say about the type tool in Premiere, but there’s nothing to be said. It’s a simple, useful tool that’s easy to use. I haven’t edited in Premiere for over two years now, and despite pressing every incorrect keyboard shortcut, I was able to apply and animate the text quickly and with ease.

I love using Resolve, and I think it’s the very best in many areas, however, text isn’t one of them. Despite not having custom presets or 3D text applications, Premiere wins this round for the simplicity of its text.

Looking for more articles on film and video editing? Check these out.