The Future of Cinema: Laser Projectors

Laser technology is changing the way films are projected – now in theaters, next in homes. 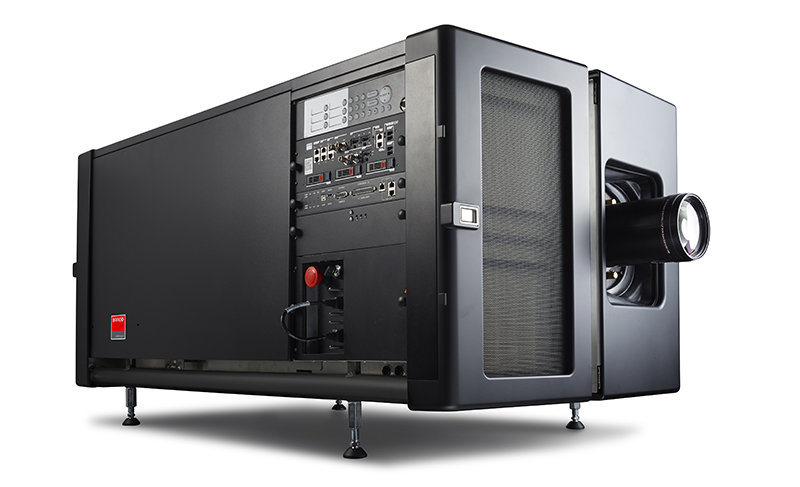 For over six decades, xenon lamps have been the standard for use in theater and home projectors. An alternative solution using lasers may make the prevalent technology a thing of the past. The products known as Laser Illuminated Projectors (LIPs) are already available for commercial use.

There are two types of LIPs, differentiated by brightness levels: High Brightness RGB LIPs deliver more than 60,000 lumens of brightness and will be used in premium and large-screen theaters, and Blue Pumped Phosphor (BPP) LIPs generate about 6,000 lumens for usage in smaller theaters. Household names such as Sony, NEC, IMAX, and Casio are producing models now.

One of the main benefits of lasers over traditional xenon lamps is their high spatial brightness. Lasers have the unique property of emanating light from a highly parallel, or collimated, source while having minimal spread. Think of the laser pointer you use to tease your cat: the beam is concentrated to a pretty specific, single point as opposed to, say, an incandescent bulb where the light is more spread out. The technical term for this spread is called the étendue, in case you want to impress your friends at a cocktail party! In lasers, less spread is desirable since the beam will be more focused and thereby more efficient. In the 60,000-lumen models this results in brightness that’s two to three times higher than xenon lighting.

Another significant feature of lasers is their extremely long lifetimes, lasting up to 100,000 hours in RGB LIPs and diminishing very little over this time. At full power, these lasers typically lose only 20% of their energy after 30,000 hours, which is considered end-of-life at that power. BPP projectors are down 25% in 10,000 hours.

Lasers promise to last for at least five years and for up to ten years without a lamp change. Over this time period you’d have to change out a xenon lamp, which only lasts around 500 hours, 60 times.

To accomplish such high performance over years of use, you might’ve guessed that lasers are also very energy efficient…and you’d be right. Lasers have what is known as high-conversion efficiency. Higher efficiency means less energy is spent as heat, which means lasers require less cooling as well.

Let’s come back to the two types of projectors to understand a bit more on how they work. First, we have the RGB LIP that utilizes costlier red, green and blue lasers and produces significantly more lumens. Three colors, three lasers. Easy enough.

The second system is the Blue Pumped Phosphor, which utilizes only blue lasers. The cost in particular of blue lasers has come down so much in recent years that it’s beginning to dominate the technology. Red and green can be generated from a second blue laser to complete the tristimulus RGB system. To do this, the blue laser passes through a rotating phosphor disc capable of generating the colors. The overall system is less bright, but it’s also cheaper, an expected tradeoff.

There are also two types of designs for the higher-end systems. The first appears exactly as we’ve thought of projectors since their inception, with the light source inside the box, shielding the lasers and providing a safe and efficient architecture. The second design is a more involved fiber-coupled system that has the advantage of being modular and can be controlled from an external, remote source.

It all sounds great, but are there restrictions to the technology? While there are really no optical limits to how bright lasers can go, particularly if the étendue is low, there are thermal limits that restrict brightness, at least for now.

Though the contrast ratio in laser projection conforms to and even supersedes the DCI spec, with new standards still being developed, the level of high dynamic range may change and laser technology would need to catch up in the technological leapfrogging game we all know so well. The content would also need to be mastered for that contrast range, which it currently isn’t. Do it improperly and you’ll get too much speckle, the term for an undesirable interference pattern. As always, we want nominal artifacts, especially when projecting to the far distances in a cinema.

Currently laser projectors are waiting for the early adopters to embrace and implement the systems in their theaters. As with most technology, more widespread use will lead to descending costs over time, and it’ll be exciting to see extensive adoption in years to come.