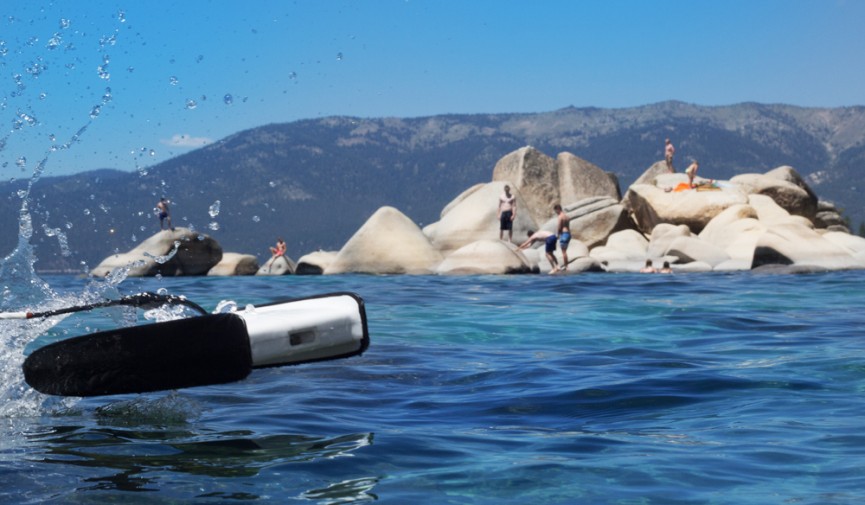 This New Drone Can ‘Fly’ Underwater

The submersible Trident drone will soon allow you to explore the ocean floor from shore.

We’re smack dab in the middle of the greatest aerial videography craze the world has ever seen, and that’s a good thing. Drones produce stunning footage that would have been otherwise impossible to get. But even as drones are enhanced to fly higher, farther, and longer, one company is taking the plunge to think about drones in an entirely new way.

The OpenROV Trident is the second underwater vehicle created by OpenROV, a small underwater robotics company started by Eric Stackpole and David Lang. The Trident looks to add much more functionality compared to the original OpenROV. For starters, the Trident is built with a very sleek design that allows it to zip through the water at the breakneck speed of 4.4mph. The device is so smooth when piloting underwater that the inventors say it’s feels very similar to piloting an aerial drone.

Fun Fact: The song featured in the above video is Human Evolution from PremiumBeat! Be sure to check out our extensive library of royalty free music for all of your soundtrack needs.

The Trident is capable of diving to depths of up to 100m, but the drone’s most impressive feature is the three-hour battery life. The feature that is most exciting for filmmakers and videographers is the drone’s front-facing HD camera. Coupled with the onboard headlights, users will be able to capture fantastic footage even in dark murky water.

Unlike an aerial drone, the Trident needs to be connected to a tether at all times. By default, the Trident will come with a 25m (82ft) tether. If you want to go even deeper, you can get an extra-long tether for dives up to 100m (328ft).

The Trident is currently on Kickstarter until October 30 and we’re happy to report that they have already received 11x the support needed. If you want to pre-reserve your Trident now, you’ll get a significant discount as an early adopter. The only downside: they won’t be shipping until November of 2016.

While it’s certainly easy for us to look at this new device from an enthusiast’s perspective, the developers are insisting that this drone will be a great tool for scientists and hobbyists alike. The drone has already been used to map underwater surfaces and take people to places they’ve never seen before. This TED talk presented by Eric Stackpole shows us how the OpenROV was born.

What started out as a quest for lost gold has seemingly evolved into the beginning of the underwater drone revolution.

The Trident will retail for $1,199 and be available November 2016. If you hurry, you can get an early-bird discount on the Kickstarter page.

What do you think of this new aquatic device? Are you excited to try one? Share your thoughts in the comments below.