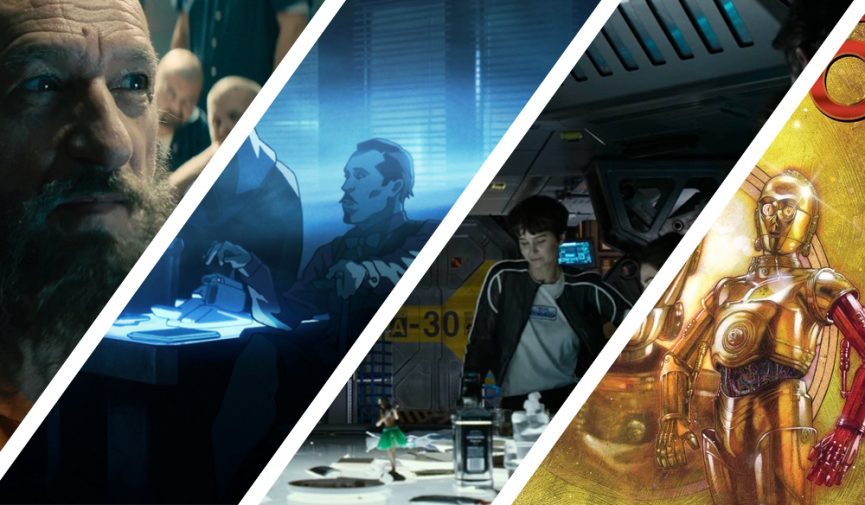 Are Spin-Offs and Media Tie-Ins Changing The Summer Blockbuster?

Hollywood’s biggest franchises are increasingly creating offscreen media tie-ins. These extras can be great, but is this damaging the films themselves?

There was a time when a film would end as soon the credits rolled. The characters had fulfilled their journey; the plot had come to its conclusion. The end. However, with the increase in studios pushing for franchises that share the “in-film universe,” and studios clamoring to produce more films spun from previous hits, we’re seeing an increase in film characters living off the screen in short films, novels, and comics. However, more worryingly, we’re also starting to see a shift of important onscreen information offscreen.

Before we break down how content delivery is evolving, we must first understand canon, because when we look at how spin-off media can get misused, we can see how studios are using canon to encourage consumers to purchase tie-in merchandise.

Canon simply is a term that grants official merit from filmmakers or license holders to spin-off property. It’s a term you hear a lot in the science fiction and fantasy genres, and it’s no coincidence that we see spin-off and tie-in media predominantly from these genres.

Nathan Ditum at Kotaku has a lengthy essay on “Why People Get So Worked Up About ‘Canon’,” which is a fascinating read in itself, but there’s a key area that Nathan touches upon:

The reason this is such a compelling thing, despite the surface madness of it, is that love sends us crazy. When we love a world, we want to exist and revel in it. We want it to be true. And that truth is disrupted by inconsistency and contradiction. We need that integrity — our belief requires it. Canon is about neatness, and appreciation, and the urge to know and absorb everything about something you love. It’s about ownership and protectiveness. And it can also be unexpectedly damaging.

Novels that expand a film’s story are not new — they’ve been around for quite some time, and film novelizations will often offer new perspectives you don’t see in the films that inspire them. For example, in E.T. The Extra-Terrestrial by William Kotzwinkle, we go into the mind of E.T. himself.

However, the need to know everything has perhaps been used most efficiently by the Star Wars franchise. Since 1999’s Star Wars: The Phantom Menace, each film has inspired novels, comics, video games, and animated cartoons that expand the themes and characters in the movies. Since The Force Awakens, the media tie-in trend has continued, but we have also seen the franchise asking us to discover information elsewhere, instead of presenting it to us in the film itself.

Negative Use of Spin-off Media

For the few who did not see Star Wars: The Force Awakens, that line was delivered by a robotic character who usually sports identical gold arms, and as you can tell from the quote, one arm is now red.

That wasn’t just a quip to Han Solo to make the audience laugh (although the people in my theatre sure did), the golden droid was also inviting us to ask the same question: “How did you get that red arm?” The problem is, the movie doesn’t tell us. To find out, you have to purchase the $1.99 comic from Marvel. 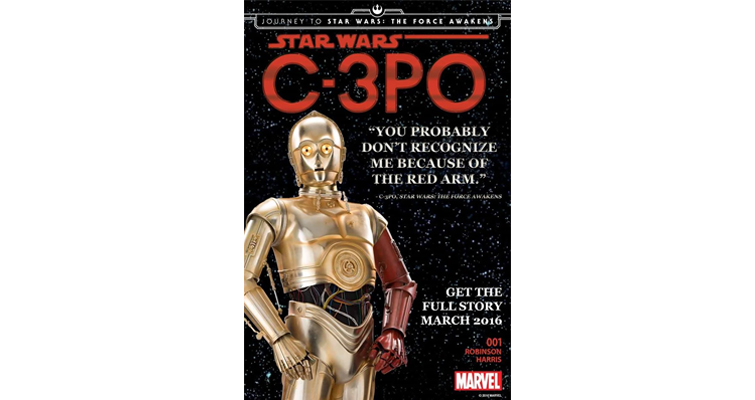 While you could easily read a summary of the story somewhere online, when we’re talking about canon (and that insufferable desire to know everything about the world you love), you might think you’re getting cheated out of a quick explanation — just so some fans will buy the information later. And the issue isn’t only about plot information. This trend can include characters, too.

In 2017’s Star Wars: The Last Jedi, we met the stuttering McGuffin character known as “DJ.” This character helped the protagonists get from point A to B — only to betray them in the end. Where this character came from, what his motives are, and why he works for the highest bidder are all mysteries. That is, unless you buy the tie-in comic. As one CinemaBlend reader commented, “I remember when characters in movies were written well enough that they didn’t need alternative methods of storytelling to make you care about them.”

In 2013, Marvel released the hotly anticipated Iron Man 3. It opened to favorable reviews and broke a dozen box office records. However, hardcore fans of the property were disappointed at the twist reveal of the Mandarin — in that there wasn’t one. At least, not in the style the fans are used to. In brief, The Mandarin is to Iron Man what the Joker is to Batman, and viewers didn’t get this information in the movie.

The studio heard the fans loud and clear. A year later, Marvel released a direct-to-video short film titled “All Hail The King,” which featured Trevor Slattery, the false Mandarin. In the short, we see that there is, in fact, a terrorist group led by the real Mandarin and that Slattery’s impersonation has displeased him.

The short film is a quick bolt of energized fun that expands the Marvel universe beyond the feature films. But more importantly, it nullifies the villain’s journey in Iron Man 3. In one scene, the villain of the film, Aldrich Killian, shouts “No more false faces. You said you wanted ‘The Mandarin’ . . . you’re looking right at him. It was always me Tony, right from the start. I am the Mandarin!” Well, after the short film, not anymore — just as Trevor is no longer the fake Mandarin, Aldrich is no longer the real Mandarin.

Speaking to UpRoxx, director Shane Black had the following to say:

Marvel saw so many negative things they made a whole other movie just to apologize called [All] Hail the King. In which they said, ‘No, no, the Mandarin is still alive. That wasn’t him. There’s a real Mandarin.’ The only reason they made that was an apology to fans who were so angry . . . We didn’t know. We all thought they’d eat it up because it never occurred to us the Mandarin is as iconic to people as, say, the Joker in Batman.

With one short film, the studio was able to hint at the existence of the beloved villain (although we’ve yet to see or hear about the Mandarin) and keep the peace with the fans. However, you have to ask about the integrity of the artistic vision when filmmakers can change elements of a story after the fact with a spin-off. Sure, we’re talking about a superhero blockbuster here, but still, when you walk out of a theater knowing that what you’ve just seen can change depending on the fans’ reactions, it can feel empty; nothing is complete.

It’s easy to focus on the negatives aspects of tie-in media, but there are plenty examples of stand-alone material that enriches the lore of a film’s universe.

When we watch a drama or thriller, the story may linger with us for a few days while digest what we’ve just watched and how it has positively or negatively affected us, but we don’t necessarily continue to wonder how that world, within that story, is still turning. It’s our world; we don’t need to.

However, in genre films — mainly science fiction, and fantasy, where we are transported to thriving story universe with rich lore, history, and character mythos — there will always be an element of the untold. There is always an event before the storyline that led the characters to their current situations in the film. If you watch any sci-fi or fantasy film, within the first thirty minutes, you’ll often see plenty of plot history.

In anticipation of the release of Blade Runner 2049, for example, Warner Brother’s released three short films set before the events in the film, featuring characters from the movie. One of these films covered the blackout event referenced in the film.

Luv: “All our memory bearings from the time. They were all damaged in the Blackout. But there are, sometimes, fragments.”

The preceding is a simple line of exposition that gives context to the data loss in the film. Warner Brothers also expanded on this event in the short anime film aptly named Blackout 2022.

The short explores who caused the blackout, how it happened, and the circumstances surrounding it — and we also see an animated glimpse of the character Sapper, who appears in the feature. The most important thing to note: this short film works on its own. You do not have to watch it to understand a vital element of 2049, nor does it change the events of 2049 — it simply offers additional insight into a plot event. Further, it works as a stand-alone short film that someone without any knowledge of Blade Runner could appreciate. (Although, of course, watching both movies improves your experience of each.)

A more modest example of tie-ins used correctly is Alien: Covenant’s Last Supper prologue. Although the prologue lacks a typical short film narrative and merely serves as a prologue to the feature, we’re get glimpse of the crew members and their characteristics, the ship design, and an updated version of the android portrayed by Michael Fasbender.

As with the Blade Runner 2049 short films, you don’t have to see this sequence to appreciate the film itself. It’s an addition to the film. I think if studios want continue to use short films, comics, and novels to expand their film worlds, it should be in the vein of these examples: a promotional teaser like the Alien clip or an expanded event like Blackout 2022. It’s a method that adds integrity and adventure to a film’s premise, not something that asks you to devote more time and money after the experience for essential information about a character or plot event that should have appeared in the film itself.

Interested in the filmmakers behind some of the industry’s leading movies? Check out these interviews: