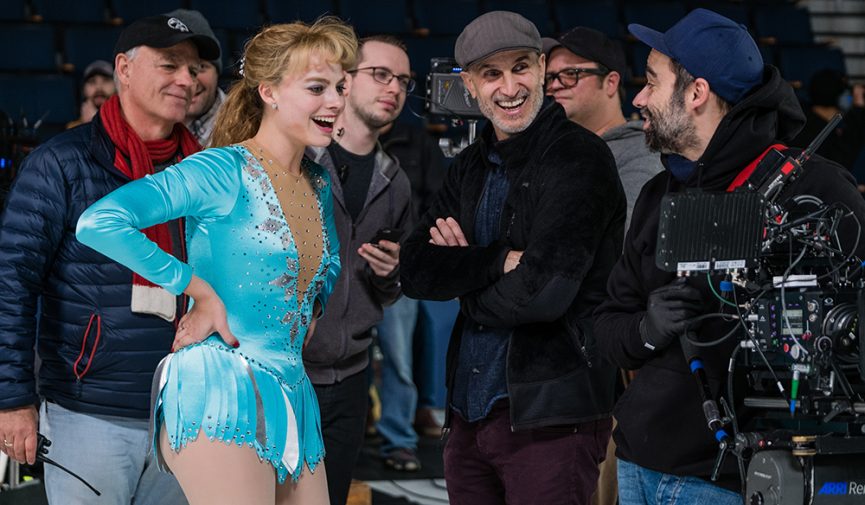 Interview: How the Editor Behind I, Tonya Recreated History

We sat down with the editor of I, Tonya to discuss cross-genre editing and what it’s like to work on projects of different sizes and budgets.

All images via NEON.

One of the most audacious biopics in recent memory, I, Tonya, took audiences and festivalgoers by storm this past September, and they praised the film’s narrative prowess and Margot Robbie’s exceptional performance. Based on a true story, the film focuses on the Olympic career and life of controversial figure skater Tonya Harding — and the events leading up to and following the incident that would go on to define public perception of her. The editor behind this Golden Globe-nominated picture, Tatiana S. Riegel, talked to us about what it was like balancing the rapid shift in tone, collaborating with Craig Gillespie, and telling the true story of a divisive figure in American history.

Like most low-budget pictures, I, Tonya had a quick turnaround. Wrapping production in Spring 2017, the film was shooting for a fall release with hopes of making it into the 2017 Oscar season. This meant the crew had to fly through post-production just weeks before the film’s premiere at the Toronto Film Festival. Surprisingly, the short time frame did not put unnecessary pressure or restraints on the editorial crew. Riegel talked to us about the benefits of working with a time crunch, especially with a team you trust: “Sometimes less is better — it forces you to make certain decisions.”

According to Riegel, they had enough time to do everything. This speaks volumes to the experience and comfort the veteran editor brings to a project. Often, if you’re left to sit with your edit for weeks or months at a time, anxiety and self-doubt will kick in, leading you to kill more than just your darlings. The I, Tonya time crunch was not unexpected, based on the size of the project and the target release date.

The project began after the film’s writer, Steven Rogers, watched the 30 for 30 documentary “The Price of Gold.” Shortly thereafter, he went to interview Tonya Harding, then found the guy (her ex-husband) and interviewed him. After hearing both their stories, Rogers found they had wildly contradictory points of view. It was these two incredibly different takes on one moment in time that created and informed the film’s unique narrative:

It was a juggle of whose point we’re listening to, and how everybody’s truth is their own. In terms of truth, it’s a little fluctuating at times. There are things that are factual that everybody knows, and there are other things that are people’s points of view, which vary.

The director, Craig Gillespie, had worked with Rogers on projects before, including different genres and styles, like the underrated horror comedy Fright Night or the blockbuster The Finest Hours. For I, Tonya, the two faced their biggest challenge yet in finding the right tone for the film. The result was a balance between intense emotional drama and comedy. This was a tone that the two found success with in their collaboration on Lars and the Real Girl. The subject matter of that film was very serious, with a strong message about domestic abuse, which is not naturally conducive to comedy.

Riegel reflects on the importance of telling a story, honoring the real people, and respecting events — all while telling an engaging story.

You certainly don’t want to make fun of anybody or belittle the topic. It was something we had to work with in the back of our heads and in the editing suite as the film progressed.

Balancing the drama and comedy is actually a more accurate representation of real life than anything the two have done in the past. This particular subject matter was particularly fascinating because of the image of Tonya Harding that mainstream audiences already had in mind — many paint her as the villain in this story. Most people who remember the incident involving Nancy Kerrigan have a misguided take on what actually happened. Riegel points to the importance of the time when she was in the spotlight. Because the internet was not yet a thing, the media cast her in a certain light that fit their narrative. The chance to reveal the character as a real, complicated human was part of why the filmmakers decided to work on the project.

Nobody’s story is clearly black and white, which means that good storytelling showcases complicated characters. What happened to Harding twenty-five years ago was a reflection of the time and how people in the media decided to portray her. It’s important to know her motivations — and that she was a real, complex individual.

Because Riegel has worked on major motion pictures like The Finest Hours with substantial budgets, shifting from projects with tens of millions of dollars to working on an intimate character study like I, Tonya, with a narrow production timeline, one might think that switching up her workflow would be quite challenging. But for Riegel, it’s all about the story:

I try to make it about the story, always. I think that’s the most important place to start and finish, everything in between, that comes with budget or lack thereof. That’s where you start to have your series of compromises. The types of films that really move me emotionally, I could sit and watch on a tiny screen in an airplane

Even if you’ve worked with some of the all-time greats like Robert Elswit and Quentin Tarantino, technical prowess and talent won’t help if you’re not working with a story that grips you emotionally.

Does the Budget Matter?

While she has enjoyed working on bigger films and facing their technological challenges, Riegel talks about the importance of expanding the scope of your work in order to tell stories in creative, new ways. Big-budget features come with a lot of cooks in the kitchen, a lot of people to answer to, which sometimes works out better than others. Having started on very small, independent features, Riegel began her apprenticeship on a movie with less than a million dollars.

There’s something really lovely about getting to make your vision or participate in making the vision of the director without having to get into all the other nonsense.

In regards to jumping from genre to genre (horror to comedy to drama) to strictly online content, one would think it might be difficult to adjust to the format through which viewers will see your work. Watching something on Vimeo and watching it in a movie theater are certainly different experiences, and they require a total shift in the way editors work on them:

If one is a good editor, they should be able to cut all genres of films. In every film, you have a little bit of everything. Like in I, Tonya, you’ve got these action sequences with ice skating and tricks that is very entertaining and engaging in way that the comedic moments and dramatic moments are not. Little, tiny eye moments or reaction shots can sway the meaning of a scene.

Films do not often fit neatly into only one genre. For every serious action scene, you’ll usually also see a comedic beat soon after. Engaging films are usually full of universal emotions that audiences everywhere can relate to. Riegel understands how easy it is to fall into a routine and continuously take on similar projects, sticking to one genre or budget. But she’s constantly taking on new projects, offering a wide range of tone, style, and form. The film industry needs more editors like this who are unafraid of a challenge.

On actors breaking the fourth wall, Riegel tells us the writer wrote the inconsistent nature of the interviews into the film. On-camera interviews transition into voice-overs, which transition into two-person dialogue scenes. This wasn’t always the film’s direction. The clips and sequences during which Tonya turns to the camera and talks to the audience were originally voice-overs or talking-head interviews. This direct stylistic decision was a way to portray Tonya’s survival and resilience throughout the hardships of the narrative. However, the filmmakers shot it and cut it both ways. One breaking the fourth wall, and one that didn’t.

In regards to multi-cam footage and working with the DP, Riegel has maintained her work ethic of keeping her timeline minimal and straightforward, since she usually has to send her sequences to VFX, sound departments, or scoring.

Riegel offered a last bit of advice for any aspiring filmmaker:

I can’t help but find the comparison with a musical instrument or dancer — a lot of it is practice. You have to get your 10,000 hours in. You learn by doing it over and over again. You’re not going to be an expert at first. You find problems and solve problems that end up helping you become a better editor. You solve these issues, and then in the next film or project, you come up with a similar issue you can recall ‘Wait I did it this way. I can do it this way with this new material.’ Never turn down an opportunity to edit. There’s no harm in editing footage for fun. Just keep working

In closing, Riegel offered some advice only a veteran editor could: take criticism. Receiving feedback from your clients can be one of the most painful processes to go through, often becoming heated on certain cuts, over song choices, or regarding shot inclusions. Riegel suggests that you shouldn’t get up in arms so quickly:

Don’t get hung up on one note. For every ten notes that I get, I may disagree with nine of them, one of them is going to be something I never thought of it. You have to push through the other nine to get to that one that opens the door. Stay open and flexible, and embrace other’s opinions. In the end, you’re not making a movie only for yourself; you’re making it for an audience. Otherwise, you can do that, but you won’t get very far if nobody wants to see it. So Practice, and be open to notes and opinions.

(I, Tonya was edited on Avid.)