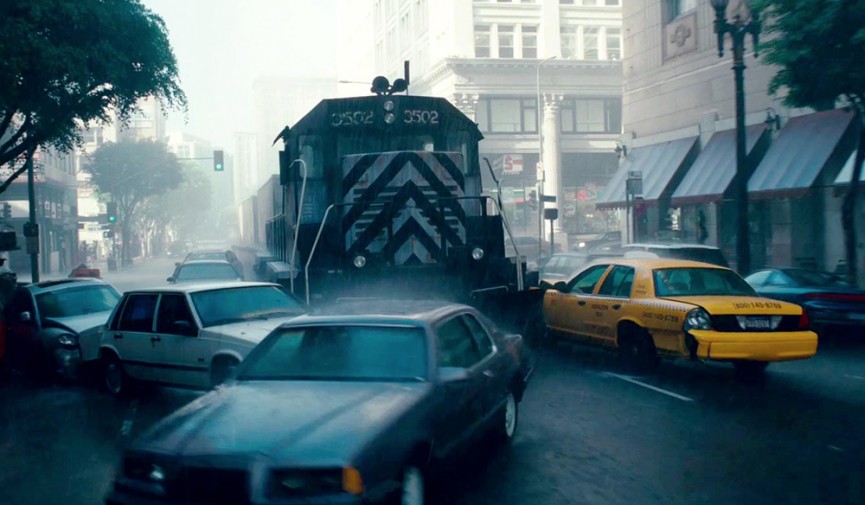 Tips For Filming in the Rain

Filming in the rain is definitely a challenge, but sometimes it’s a must. Use these tips and tricks to make your rainy shots worth the effort.

Making rain is one of the most difficult things you can do in a picture.

The above quote is from 1st AD Nilo Otero (Inception, The Dark Knight). It’s from the Inception behind-the-scenes video featured in this article. Otero is certainly not alone in his view.

You’ll find that within the majority of filmmaking books, the various authors always tend to state that if you can change a scene that involves rain to normal weather, then do so. So, just how hard is it to film rain? There are a few factors that come into play.

The Challenges of Shooting in Rain

Have you ever tried to film in the rain and noticed it just didn’t look that great? It looked as if it was only a light shower, but on location, you were getting soaked to the bone?

Check out the video sequence above. It’s a shot from my short film which was captured only a few weeks ago. The character looks wet, there’s rainwater on the plants, and you can see that the sky is gray. I can also account for getting soaked behind the camera. Nevertheless, you can’t see the rain in the composition; it just looks like a misty spray of water. In fact, the rain was relatively heavy.

In the Jimmy Kimmel Live skit below, he mocks the Californian news reporters for their coverage of the rain — but more importantly, take note that throughout the various news reports you can hardly, if at all, see the rain.

This comes down to two things — the size of the rain and the shutter angle. Raindrops, even during a moderate downpour, are often too small and translucent for the camera to capture. When you factor in an 180-degree shutter angle, fast-moving objects like raindrops become nothing but a blur.

What Can You Do to Capture Rain? 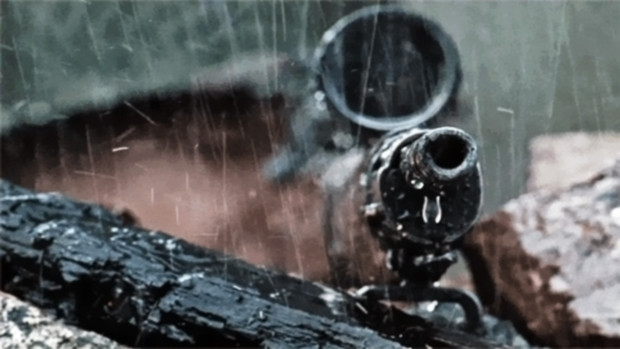 Janusz Kaminski creatively utilized this in Saving Private Ryan, as seen above. Although the 45-degree shutter angle was a primary choice to make the violence of war appear more aggressive on screen, minute elements such as water and dirt were captured in greater detail.

However, that still won’t give you the grandiose level of rain you find within films. That’s because real rain never will. A majority of rain in movies is artificial. 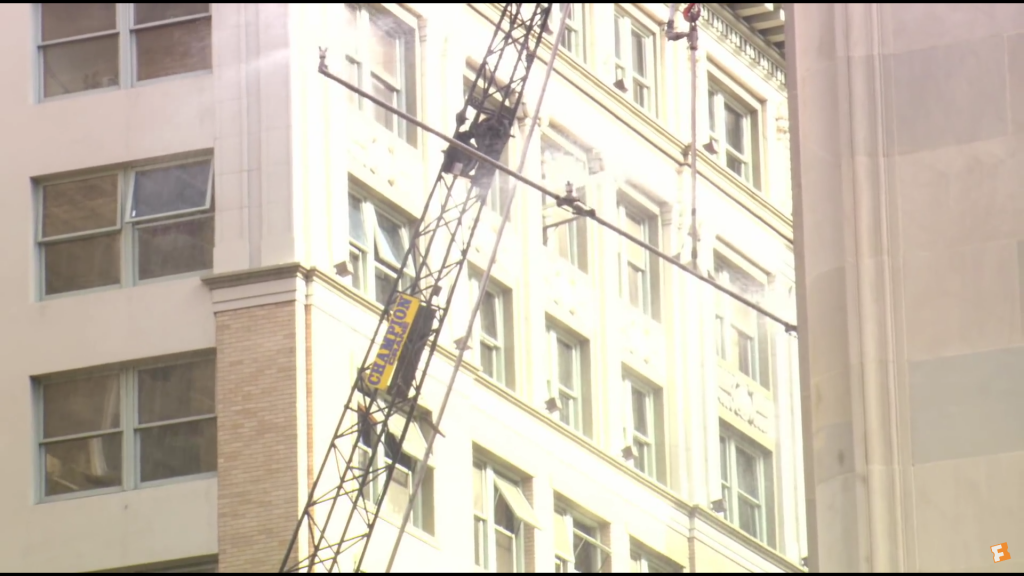 There are various types of machines for this purpose, from crane-attached rain rigs that can soak a city street to rain wands that can be operated by a single person. These produce much larger water droplets (and at a faster rate) which helps the camera pick up the rain at an 180-degree shutter.

Most major cities will have companies that can supply such rigs, but they will likely come with the added cost of also hiring out the company’s crew members to operate the machinery. If your budget is thinning, you can always search YouTube for tutorials on making your own rain machine. Here’s one from Tom Antos.

Using a rain rig is only the first part of shooting rain. One of the biggest undertakings is the lighting. If you light the rain from upstage (behind the camera), it’s not going to show — the rain needs to be illuminated from the back. Filming a rain scene at night assists this element.

[Rain scenes] in movies are always typically shot at night because it looks the best with backlight and it shows the rain. You watch a football game or something, and they say ‘Look how much it’s raining’ but you don’t see anything, and that’s the daytime rain problem.

There are a few key components you need to finalize before you shoot.

With the mention of sunshine, we come to one of the most important aspects. It is critical to point out that using any rain system on a sunny day will completely ruin the illusion of it being a rainy day. As special effects supervisor Chris Corbould says in the Inception BTS video, “It’s not a common practice to shoot a rain scene in daylight.”

Working out the configuration of the shoot to portray overcast lighting will be the hardest challenge of them all. Academy Award-winning cinematographer Wally Pfister shared his experience with working in the midday sun on Inception:

The filming posed a particular challenge for me in terms of the lighting. To try and make it look like an overcast day when it’s sunny out. Chris knew I was sweating this out. After I stopped praying for it to be overcast after months and months, I gave up on that and started doing my homework to try and figure out where exactly the sun was going to be at what time of day, and do my best to shoot around it.

I had wonderful help from a fantastic key grip Ray Garcia, who plotted the course of the sun, and was able to block the sun out with a number of different devices, of condors and cherry pickers and getting on roofs and putting up flags. That contributes to the look of the film in a way that’s hard to describe. Certain times we had to embrace the sun a little bit and our joke was ‘ok, well it’s a dream anyway.’ 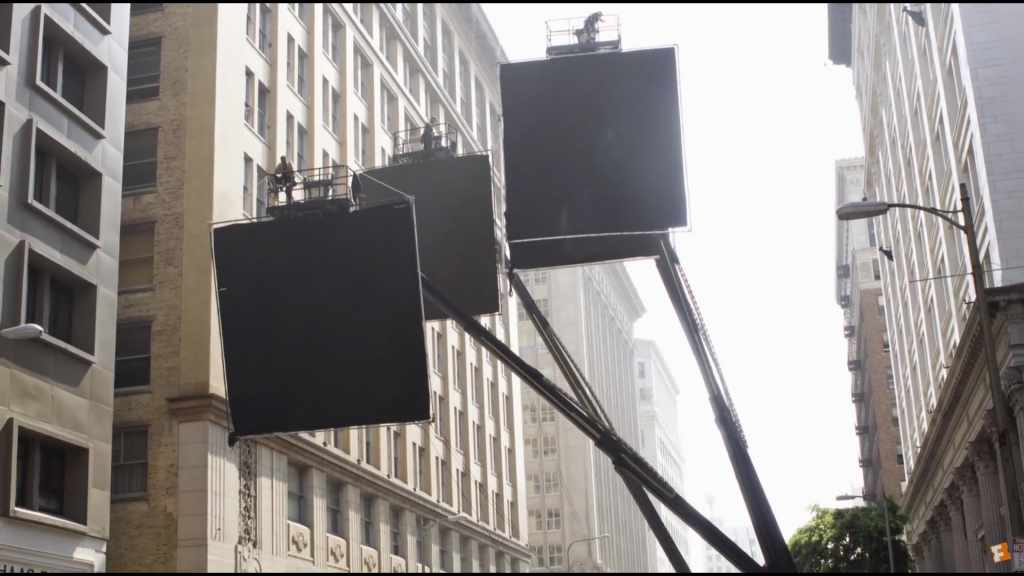 Filming in the Rain: Safety First

When shooting in the rain, water will inevitably get everywhere. When lighting equipment and other electronics are scattered around the location, it poses a significant safety risk.

In the book Cinematography: Theory and Practice (one of PremiumBeat’s recommended books for filmmakers), author and filmmaker Blain Brown says to take the following safety precautions when working with artificial rain.

If you’re shooting in the wilderness and think it might rain, PremiumBeat has a guide on how to help prepare for wet circumstances to help protect your gear. Rain does very much seem to be the bane of many filmmaker’s creative life. Yet, why do we so often see rain scenes in films?

What are your experiences with shooting in the rain? Share them in the comments below!