In this post, we’ve rounded up the best info on aspect ratios – learn how they’ve evolved over time and which one is right for your film or video project!

One of the fundamentals of film and video is aspect ratios – the relationship between height and width in regards to image size. The aspect ratio of an image is dependent on the camera in which it was shot, as well as the method used for delivery/projection. Many people are most familiar with aspect ratios when looking at televisions, as we’ve moved in recent years from the classic 4:3 sets to HD widescreen 16:9 sets. These are the two most common video aspect ratios.

To understand a bit more, check out this aspect ratios overview from the early days of film to modern HD standards. John Hess from FilmmakerIQ.com knocks it out of the park with his terrific history of film and video aspect ratios:

So, with a multitude of choices, how do you know which aspect ratio is right or your film or video project?

For a practical perspective on aspect ratios geared toward film and videomakers, watch this quick tutorial from video pros Rich Harrington and Robbie Carman. The Lynda.com tutorial is applicable to all film and video creators, covering topics like shooting for multiple devices and cropping a 4:3 aspect ratio from a 16:9 HD image:

Here are a few handy aspect ratio calculators that will assist you in determining the aspect ratio for common video formats or scaling an aspect ratio up or down (great for resizing video for web usage).

If you need to modify the height or width of your video image but you want to scale it commensurately with the aspect ratio, you’ll need to know the missing variable. For instance, if you change the height from 1920 to 1300, what should the width be to preserve the original aspect ratio? This calculator will quickly show you the missing variable so that you can ensure that the aspect ratio is maintained and the video doesn’t distort. Super useful!

Lastly, the following image shows the most common film and video aspect ratios and how they compare to each other in size and proportions: 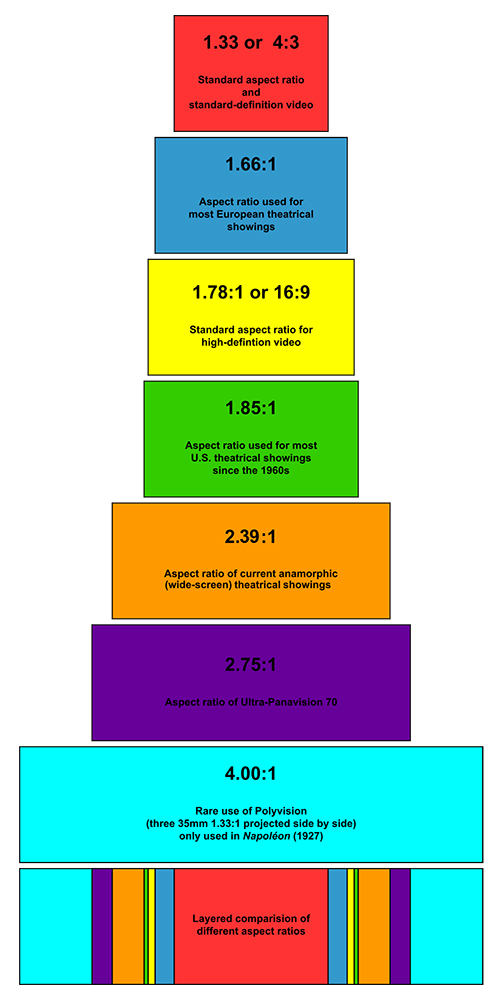