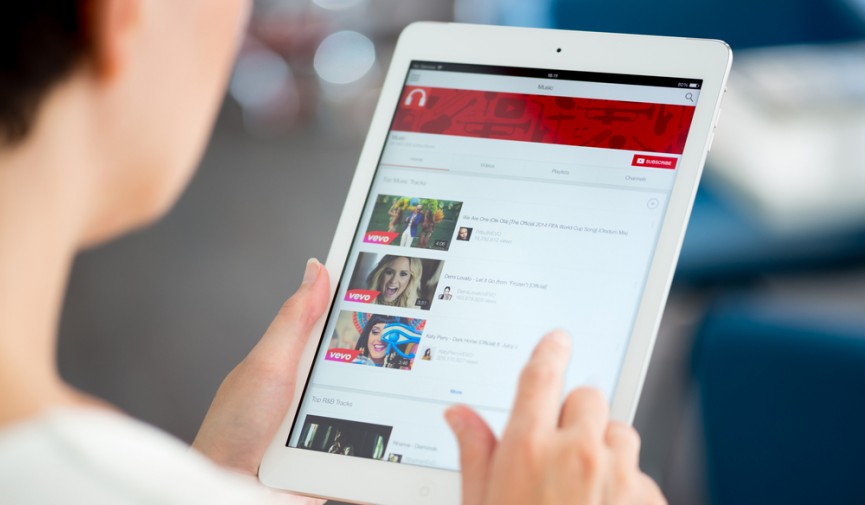 Wondering why your video was flagged on YouTube? Let’s dig into music copyright, the repercussions for use, and easy ways to get quality music for your media projects.

Ten years ago I didn’t give too much thought to using commercial music in my web video projects. Maybe it was because I was younger, or maybe it was because the web was younger and many people were uninformed. I was just starting my career as a video editor and my clients were often requesting commercial music in their projects. They’d request, “I want something that sounds like such and such popular band in my video.”

The fastest route to get there was to grab those tracks, throw them in the edit and be on my way. I wasn’t cutting national TV ad spots. These were low profile, mostly web or closed network internal company videos. I wasn’t doing too much harm… so I thought.

Since that time, there has been an increased public awareness around the legalities of using copyrighted music in video and media projects. Additionally, video hosting services, like YouTube and Vimeo have made it increasingly difficult to use copyrighted tracks without artist compensation… and for good reason.

A quick look at how we got here…

In the early 2000’s, music file sharing (pirating) among consumers flourished. Napster was joined by other popular apps like Kazaa and Limewire. In February of 2001, Napster had a record 26.4M users… incredible growth for less than two years of existence. And then the Recording Industry Association of America (RIAA), along with commercial artist labels, cracked down on these services. Users were being sued and served takedown notices. People got spooked… and rightfully so. Out of education (and fear) consumers backed off, paving the way for a successful iTunes launch that led to increasing usership throughout the decade. (In fact, it wasn’t until recently that iTunes song sales begun to decline.)

Today, Spotify and other paid or ad-supported streaming services are leading the future of consumer listening, but leaving artists with far less revenue than traditional album sales. So, it only makes sense that music licensing is now an even more important revenue stream for musicians and their backers.

Many artists today earn more money from getting their music licensed than they do from touring and from actual sales of their music. – DottedMusic

As musicians have an increased need to protect the usage of their music, where better to start looking for offenders than YouTube.

Not long after launch, YouTube began facing familiar pressure from labels and recording industry organizations to target the usage of copyrighted music. The public would soon get a new lesson.

In 2007, YouTube launched a ContentID system to identify videos on their site that used copyrighted music. To date, the service has paid out over $1B to copyright holders by running ads against any videos that use copyrighted music. But ads running against your video isn’t the worst things that can happen. Let’s take a look at some of the recourse paths YouTube takes when dealing with copyright offenders.

Today, there are four outcomes when a track is flagged on YouTube. It’s up to the music copyright holder (not the offender) to decide how they’d like to deal with the unlicensed usage of their music in YouTube videos. In order of severity: 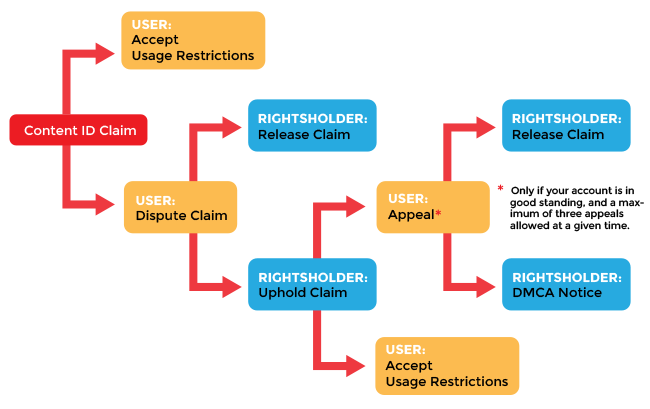 Chart from the Electronic Frontier Foundation

Monetizing with ads may not seem like such a big deal (we’re all used to seeing ads on web video at this point), but it certainly won’t fly if you’re working on a paid project for a client. Just imagine you create a video for a client’s product, only to have a competitor’s ad running next to it.

Muting the audio or blocking an entire video are terrible situations… no elaboration necessary.

So, I urge you to take a hard stand on this. Educate your clients – even when they beg for a popular track in their video, let them know that it’s really not in their best interest. Respect the time and talent that goes into creating artistic work, and you’ll also benefit yourself.

It took me time to understand the severity of this, but with increased public awareness and the support of video sharing services, it’s my hope that the next generation of video pros will respect copyright in their work… right from the start.

Need music for your videos? Most independent filmmakers or video pros don’t have the budget to obtain recognizable commercial tracks for their projects. It’s with this in mind that we created PremiumBeat.

Every track in our library is exclusive to our site, meaning NO flagging on YouTube or other video hosting services. Our Standard License covers ALL web usage for an infinite number of projects. Have a listen here!