If you’re looking to speed up your video editing work check out the Kickstarter funded CTRL+Console control surface – now available on iPad.

Earlier this year we first reported on CTRL+Console in a roundup of video editing controllers.  At the time the application was still in development, after having raised a whopping $40,000 on Kickstarter in the fall of 2012.  Fast forward, and CTRL+Console is now available for public release! 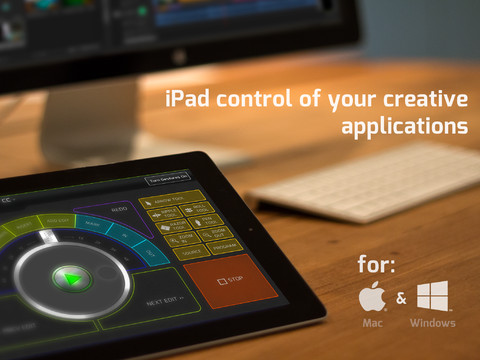 Created on the premise that keyboards were made for typing not video editing, CTRL+Console aims to be a more intuitive controller for video editing. The app is gesture based, which lets you keep your eyes on the video footage instead of down on your iPad.

Released as a FREE download through the iTunes store, the free version of CTRL+Console is a basic Quicktime video controller.  To bump up the app for video editing functionality you’ll need to upgrade via an in-app purchase of $29.99.  The editing controller works with Final Cut Pro 7, Final Cut Pro X and Adobe Premiere Pro (version 5 through CC).  If you’ve never used a video editing editing controller before you can give it a shot without a major financial commitment – unlike many physical controllers are prohibitively expensive (like the Lightworks controller at $2,000+).  The controller works with video editing apps running on both Mac and Windows based machines.

To download the in-app purchase of just the Premiere Pro and Final Cut Pro controller (basic playback functionality) you’ll only part with $4.99.   You really can’t go wrong with that price…even if only to impress your client with your snazzy new gadget.

Get more info on the CTRL+Console site.