Looking for a new way of working on your video editing projects?  Two new iPad based controllers for FCPX offer a unique workflow, but are they really more efficient?

Final Cut Pro X hasn’t come to the iPad…yet.  But PROCUTX and CTRL + Console are two applications that integrate your FCPX video editing into an iPad interface.

Video editing software and plugin maker Pixel Film Studios is really making a splash in 2013, with a slew of new FCPX plugins and effects and a new editing interface.  The PROCUTX is a revolutionary iPad based video editing controller that allows you to complete common Final Cut Pro X video editing related tasks using your iPad.

For $25 you can install the app on your iPad (or iPad mini) and reap the benefits of having a ton of FCPX controls on one slick screen.  A jog wheel takes center stage, allowing you to skim through your video editing timeline.  The app works over a shared WiFi connection. 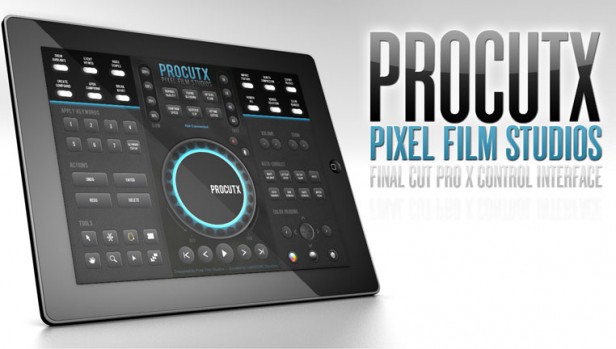 Although the creators claim it will speed up “every step of the FCPX editing process” some early users have reported a bit of a latency in the controls (which may be due in part to the strength of the WiFi signal).  The single pane control panel has keys for common editing tasks (select, cut, trim) as well as more specialized post production tools (color correction, import/export and creating compound clips).  To save time, there’s even some autocorrection buttons for quickly cleaning up noise and color issues with your footage.

From the surface, PROCUTX looks like a pretty slick tool that’s a no-brainer for FCPX video editors looking to make their workflow more efficient.  Like any new technology however, it’s not without it’s limitations and user adjustment curve – read some thoughts by early adopters over at FCP.co.

Another FCPX iPad controller scheduled to hit the market this year is CTRL + Console, the successfully funded Kickstarter campaign of technologist Jeff Chow.  The Kickstarter campaign raised over $40,000 in the fall of 2012 for Chow’s iPad based video editing control surface that works with multiple applications including FCP, FCPX and Adobe Premiere Pro.  Additional development is being done to create consoles for working in Adobe Lightroom as well.

CTRL + Console is designed so the editor can keep their eyes on video playback while editing with gestures on the app.  Favoring gestures over traditional buttons, is really what makes this app such an attractive tool for speeding up a video editing workflow.

Unfortunately a release date has not yet been set, so there’s no telling when this FCPX iPad controller will be available for public use.  We’ll keep our eyes out for the release and will keep you updated on this blog.

Are you using a controller or jog wheel in your video editing?
If so, which product/brand do you prefer?  Share your advice in the comments below!