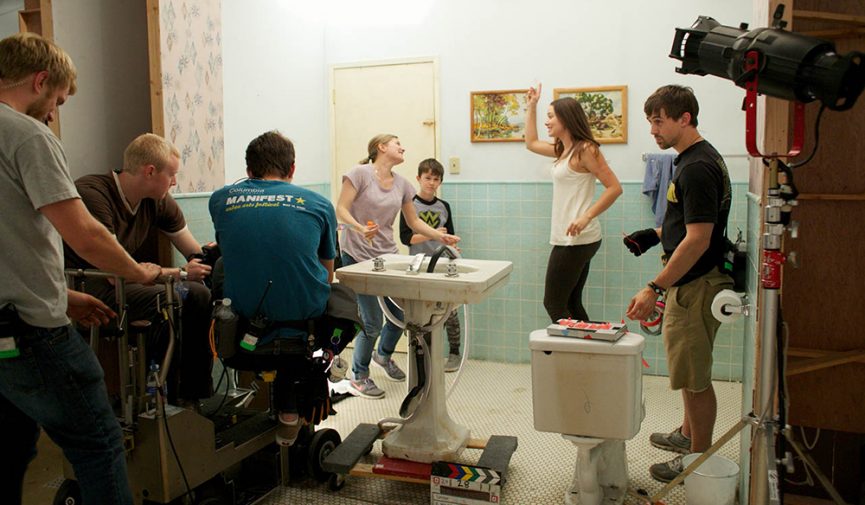 Need to shoot in a tight spot? Here are 5 helpful tips for getting the shot when your gear won’t fit.

Some of the biggest differences between working on major productions and DIY projects ones may only seem like slight inconveniences, but they can turn into serious production problems. One aspect many indie filmmakers often overlook is a big one: space. Namely, what to do when you don’t have enough of it.

It turns out, there’s a reason film productions often create entire sets on sound stages for filming what can seem like simple and mundane things like houses and rooms. While this helps them control every aspect of the shoot, it also gives filmmakers the added advantage of never being stuck with too little room to set up cameras, build out dolly tracks, or set lights practically wherever they want. When you’re shooting in a small cabin for a weekend with your crop sensor camera and 3-point lighting setup, you don’t have the luxury of moving walls to create space for lights, boom mics, or even your actors.

So, when you find yourself in a tight spot, here are some tried-and-true tips to help get the most out of your set and — and your shots. 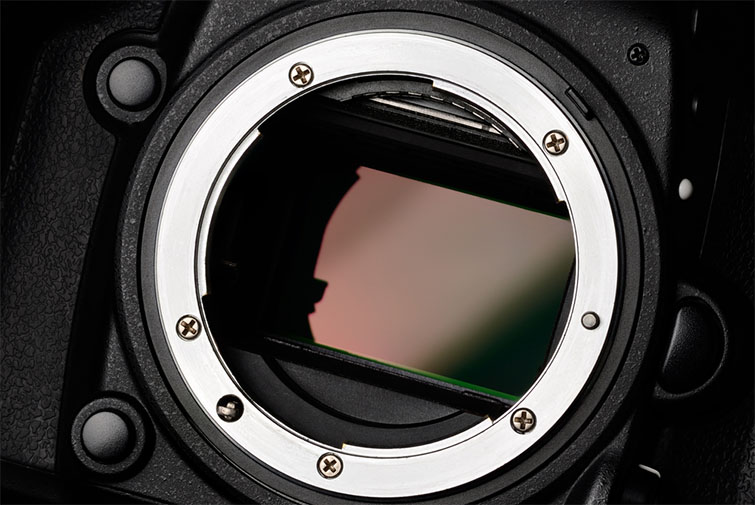 The first place to find space in your productions is right under your nose. If you’re shooting with a camera that has a crop sensor frame, you’re putting yourself at a severe disadvantage for small-space filming. A camera with a full-frame sensor, on the other hand (and with the right lenses — more on those below), you can maximize your coverage by minimizing the space you need between your camera and your subject. There are plenty of quality full-frame digital cameras on the market these days — here are several to consider. 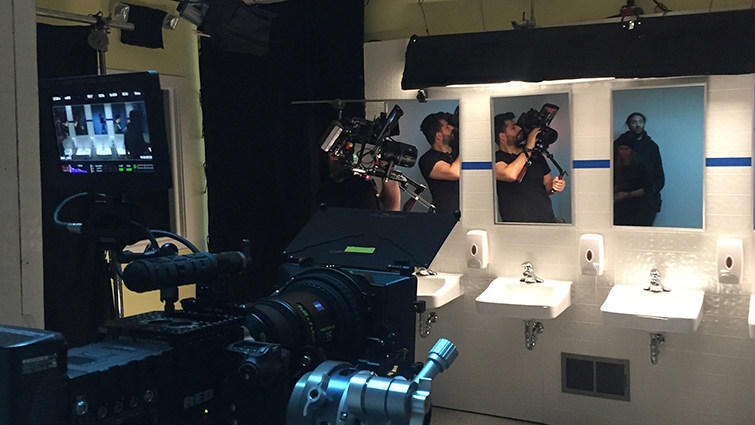 If you are shooting full frame, you have the luxury choosing which lenses are right for each of your shots. However, keep in mind that in a small space, you’re going to get some of the wide angles as well as some of the close-ups. Depending on your intended effect, these lens choices will define your film’s style, so while it may be helpful to shoot extremely wide (like say, a 12mm fisheye), it’s also going to create distortions and curves on lines that normally look straight. 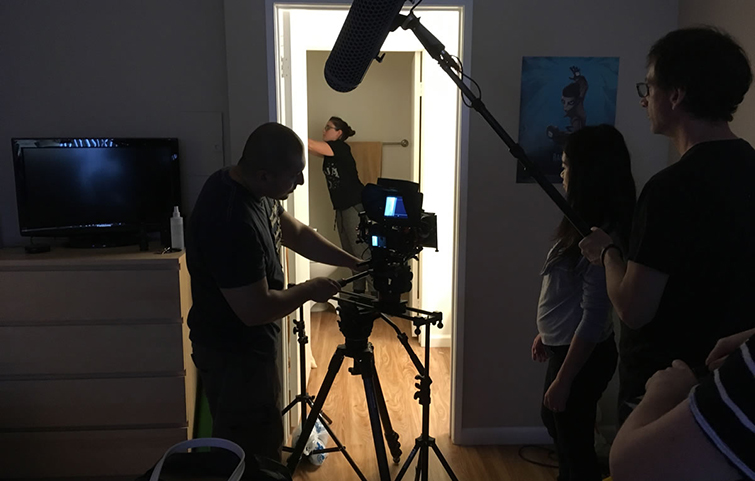 Perhaps the most troublesome part of filming in a tight space is the lack of lighting control. Most lighting set-ups require large lamps on wide lighting stands (or C-stands) with troublesome cords and power supplies. However, that doesn’t always have to be the case.

There are plenty of LED lights these days that can provide cinematic-style lighting options in minimal space. There are also lots of DIY options that have a smaller footprint. You can always make use of natural lighting as well with the addition of bounce boards (or negative fill boards) for a more natural, stylized effect. 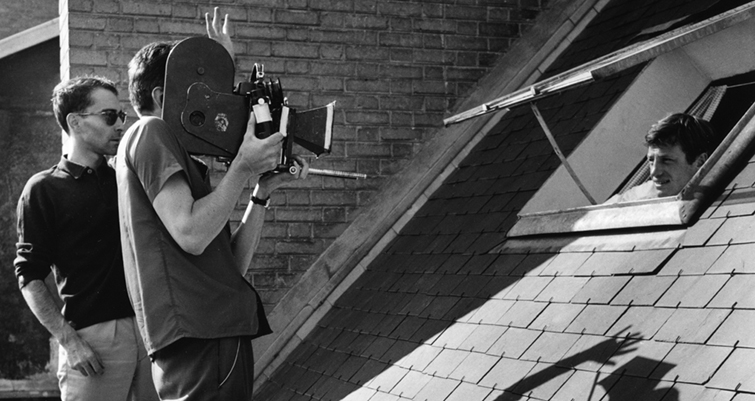 Image from behind the scenes on Breathless.

One trick most film school kids can tell you about is finding ways to cheat a shot in small places by placing the camera outside of the scene or room. It’s common among film school kids because when you’re starting out, you’re usually working with older, crop-sensor cameras and tighter lenses in non-professional settings, which forces you to find creative solutions.

One go-to you’ll see time and time again is to set a scene inside a house but then, due to tight quarters, bring the camera physically outside of the house and zoom it in through an open window or door. You’re going to have quite a bit of a trouble managing settings with your camera in a different environment, but it’s a simple way to create as much space as you need for certain shots.

5. Fake it (Close-ups in Different Locations) 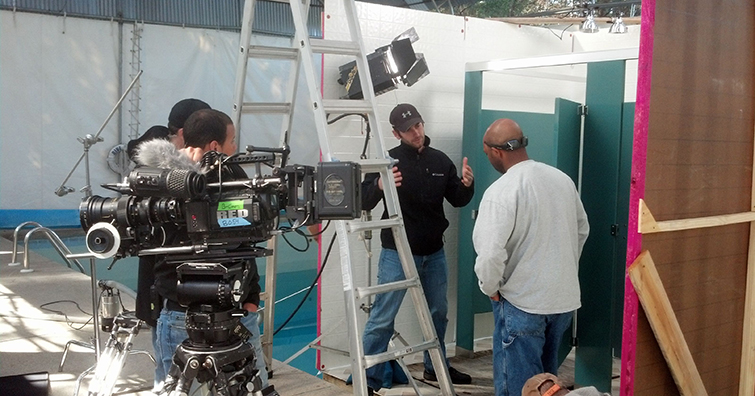 Another option is to fake the small space altogether. You don’t have to do this for the full scene, but if one shot in particular is giving you trouble due to a small area, there are creative tricks you can pull to make a shot in a different location look as if it takes place somewhere else.

Here’s an example: if you’re shooting in, say, a bathroom, and you need a reaction shot of a character in a shower, all you really need is a tile wall and some water falling, if you frame it right. You can fake the shot in an area with more room for a tight close-up and use a printed backdrop and a garden watering can. Boom, faked it.

For more indie production tips and tricks, check out some of these resources.