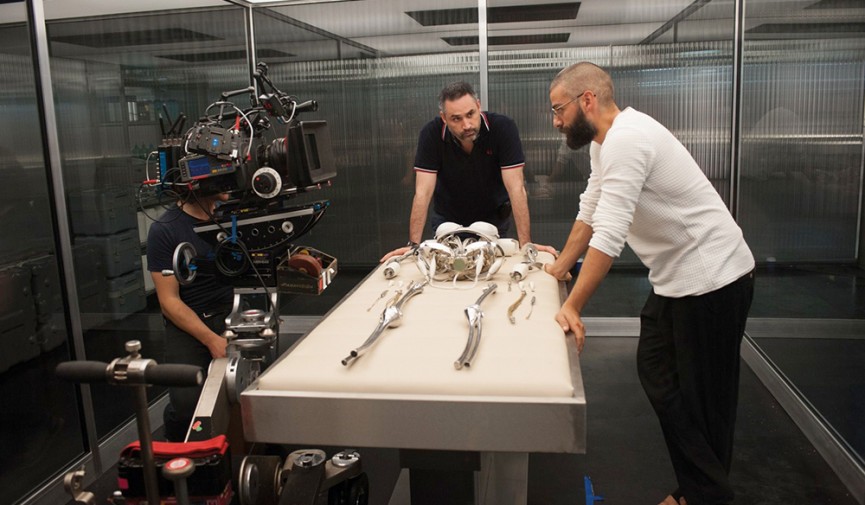 5 Ways to Nail the Sci-Fi Look

Science Fiction is one of the most popular independent genres at the moment, but many filmmakers struggle to capture the right aesthetic on camera. Here are some tips for sending your audience to the outer limits.

Top image: on the set of Ex Machina via DNA Films

Every genre calls for its own unique approach when it comes to lighting, camera settings, editing, and color correction — and sci-fi is certainly no exception. It’s hard to argue with the fact that sci-fi films often feature some of the most stylized footage of any genre, and as such, a lot of work needs to go into executing that perfect look.

There is no one-size-fits-all approach to crafting the look of any genre (nor should there be), but these guidelines will help you start off in the right direction as you shoot and post your next sci-fi flick.

1. Art Direction Is Everything 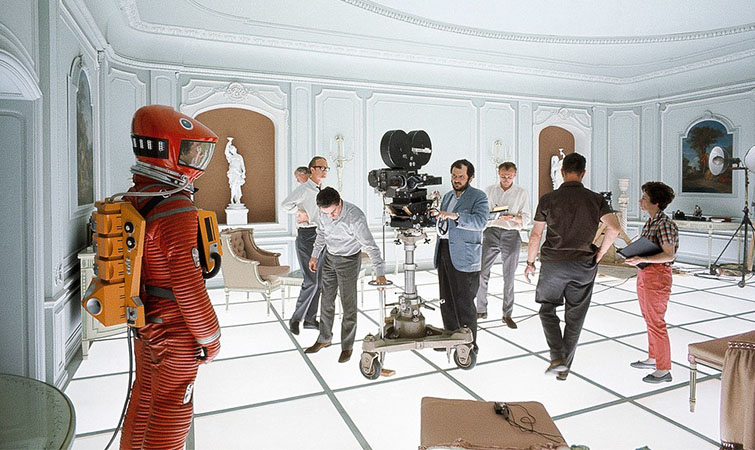 On the set of 2001: A Space Odyssey via Los Angeles County Museum of Art

When it comes to science fiction, nothing can ruin a project more quickly than poor art direction. Sci-fi is all about creating a new world for your audience to immerse themselves in, and the art direction plays a massive part in delivering on that front.

Assuming your project is properly budgeted, you’ll want to bring on a professional production designer early on in the process to help you shape the look of your film. Choices with regards to location, props, set dec, and other elements will play a vital role in whether or not the world of your film is believable, so having the right production designer on board will be immensely helpful in getting the best final result.

If your budget is too limited to hire a dedicated Production Designer, consider rewriting the locations in your script to be more conducive to the scope of your project. Certain locations (such as a desolate town) will be much easier to set decorate (even without a production designer on board) than an urban environment, for instance. 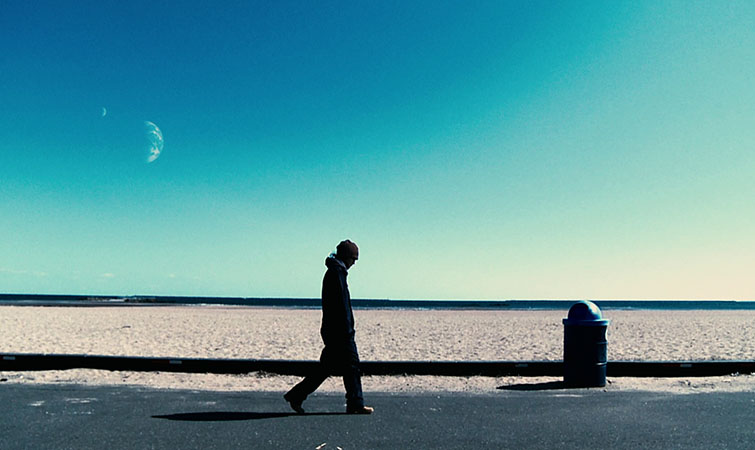 Another Earth via Fox Searchlight

Most sci-fi films call for some degree of VFX work, but unless you’re a VFX artist yourself, be very careful about how and where you choose to incorporate VFX in your film. Nine times out of ten, less is more when it comes to VFX on a budget — and there are many successful indie sci-fi films you can look to that prove that point.

The independent film and Sundance hit Another Earth is a perfect example of this. The film for all intents and purposes was shot like a drama, even though it had a sci-fi backbone to the story. The filmmakers used an extremely simple VFX shot (involving tracking an image of Earth onto the sky) throughout the film in an incredibly powerful way. Had they attempted to do more elaborate VFX work throughout the film, they likely would have only cheapened their aesthetic. In the end, they benefitted tremendously from the less-is-more approach.

3. Crank Up The Shutter Speed 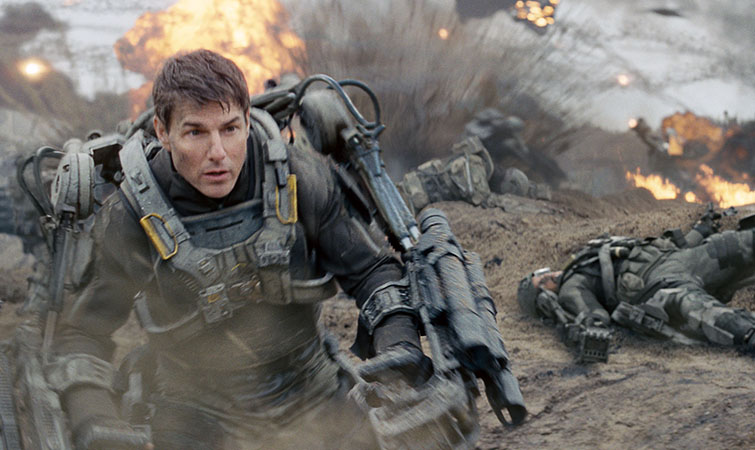 Edge of Tomorrow via Fandango

There isn’t necessarily any formula for lighting a science fiction film, since the genre now includes countless sub-genres, all with their own unique look and style. With that said, one camera-related technique that does seem to work on many science fiction films involves higher than normal shutter speeds.

The 180 degree rule states that your shutter speed should always be double that of your frame rate, so for a 24fps project, your shutter would be set to 1/48. In some genres (such as action) bumping up your shutter speed significantly higher can work really well, as it adds more intensity to the movement in your shots.

Science fiction is another genre that can benefit immensely from higher shutter speeds — but you still need to be careful not to take things too far. Cranking your shutter speed past a certain point can leave you with odd looking, distracting footage. You don’t want your audience to notice the effect, but rather to just sense it unconsciously. 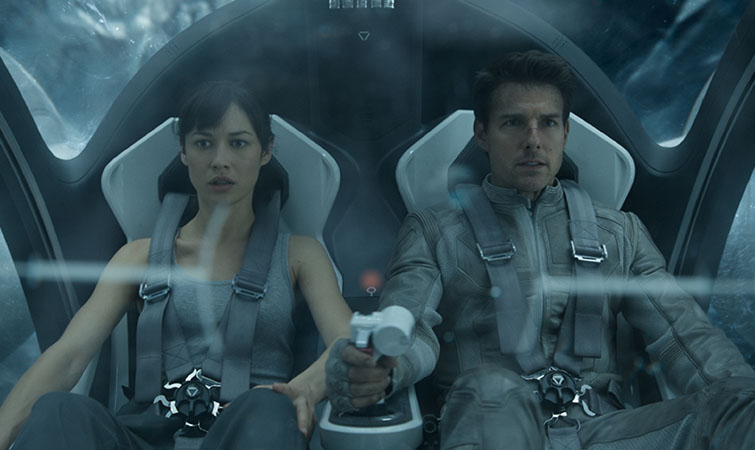 At least 50% of the sci-fi look is created in post — more specifically, in the color suite. Once again, there isn’t a single approach that’s going to work for all sci-fi films, but there are some general principles that seem to work in the majority of films in this genre. One of which is the use of cooler tones.

Many sci-fi films take place in unsettling environments, or in some cases, even dystopian societies. Warm color palettes are generally going to lead your audience to feel more comfortable, which can be counter intuitive to the genre in many respects. Cool blues, purples, and cyan tones will go a long way in creating an unsettling feeling for your viewers — and don’t forget to add a touch of desaturation too. 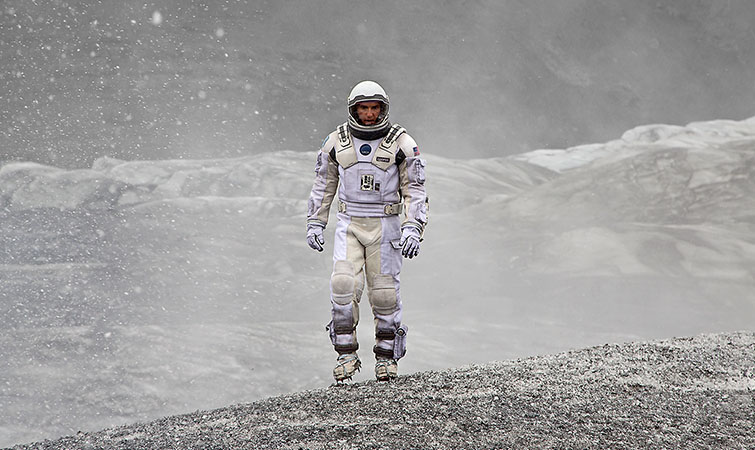 I am normally a huge advocate of film emulation. In fact, I use some form of it on nearly every project I create. With that said, sci-fi films are one of the few instances where I feel film emulation can actually work against the better interests of the project.

Science fiction often calls for a sterile and clinical look, and film emulation will typically push footage in the very opposite direction. In fact, film emulation is really all about muting colors, softening digital harshness, and generally taking the edge off of footage — which isn’t always the best choice for sci-fi. Many of the best sci-fi films have, in fact, even been shot digitally and taken advantage of the ultra clean, hyper sharp look that certain digital cinema cameras can deliver.

For some inspiration, be sure to check out the trailer below for the above mentioned film, Another Earth:

What defines the sci-fi look in your eyes? Which films in the genre inspire you most? Talk it out in the comments below!