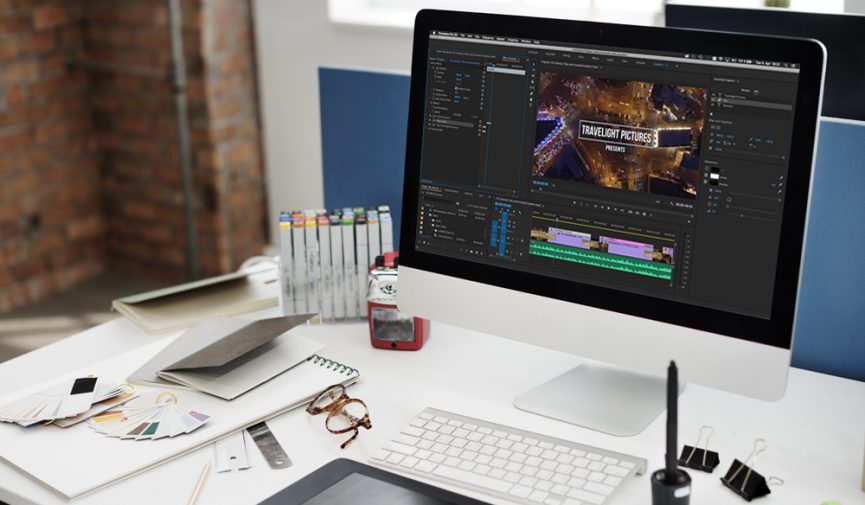 Premiere Pro gets powerful new workspaces with better After Effects and Audition integration.

Just as the Lumetri Color workspace changed color grading in Premiere Pro, the new Audio and Graphics workspaces bring powerful tools from Audition and After Effects to the NLE. After Effects gets a powerful new deblur tool and Lumetri color grading, while Audition announces a better multichannel workflow — plus news on Character Animator and updates to Team Projects. 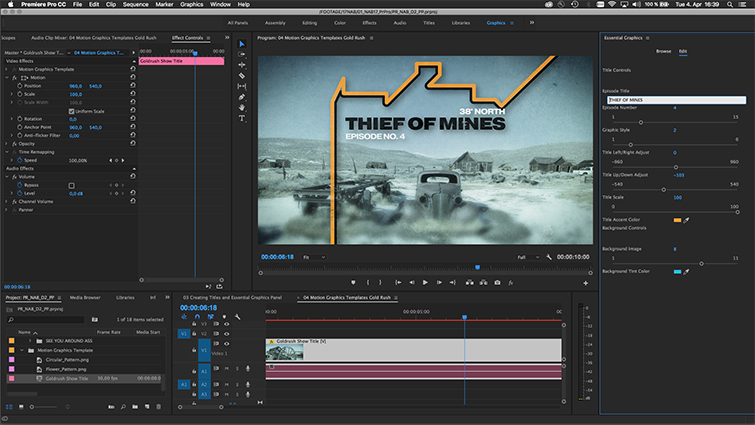 Premiere Pro turns 25 years old and has established itself as an essential NLE. The latest version of Premiere Pro CC 2017 (11.1.0) is no longer competing with the likes of FCPX or even DaVinci Resolve. Premiere Pro has set its sights on Avid, aiming to be the industry-standard editing platform. 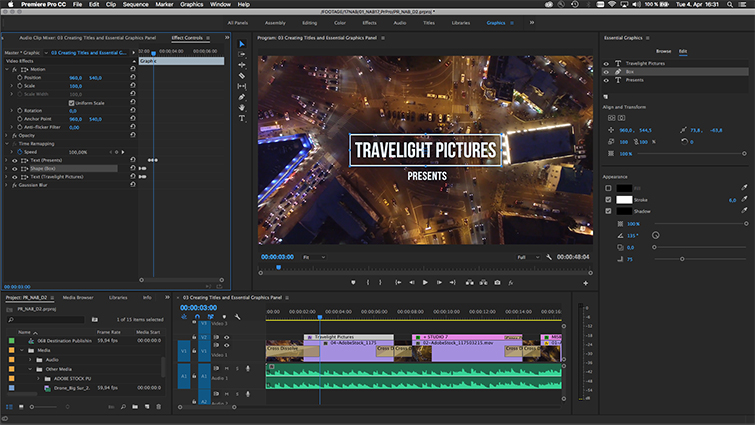 The Premiere Pro Essential Graphics workspace introduces a new panel that works seamlessly with After Effects. The tools in the workspace are similar to those in Photoshop and Illustrator, in that they enable you to work with text; align and transform words and shapes; and adjust color, opacity, drop shadow, and more.

Here is a look at the new Type tool in action.

Motion Graphics Templates will allow motion designers to create title sequences or graphics in After Effects with parameters a video editor can adjust in Premiere Pro. This eliminates the need for video editors to send titles back for minor revisions, since  you can now adjust the text, shape, and clip layers in Premiere Pro. These Motion Graphics Templates will replace the need for Live Text Templates.

The new Essential Sound panel in Premiere Pro and Audition gives video editors the power to accurately adjust audio as intended, rather than relying on the expertise of a sound engineer. Editors can assign a mix type to clips, giving each clip a role in the project — dialogue, music, sound effects, and ambience. This gives you the ability to adjust the loudness of a single role, like dialogue, uniformly at once.

If you find that Premiere Pro is not meeting your audio adjustment needs, you can send the changes you’ve made to Audition for additional alterations. Premiere Pro’s single sliders in the Essential Sound panel are actually working with several different sliders underlying the program. To dive into the detailed controls, expert sound designers can fine tune changes in the effects tab or in Audition. The audio will transfer between the programs as a live effect. All of these changes rely on Adobe Sensei, the company’s artificial intelligence and machine learning framework.

Though Premiere Pro saw most of the big updates, After Effects received some powerful upgrades as well.

The most powerful AE update is the new Camera Shake Deblur tool. If you stabilized footage with Warp Stabilizer, you may have seen some blurred footage. The Camera Shake Deblur analyzes footage, detects blur, and then finds sharp frames around the edge of the blurred area. An automated process then processes a smoother image and applies it to the footage.

In addition to the Premiere Pro and After Effects updates, there is still more for those creatives working in Team Projects, Audition, and Character Animator.

The Essential Sound panel (like the Graphics panel) works directly with Audition, and using Dynamic Link, you can view footage in Audition as well. There have also been major updates to the multichannel workflow. Multitrack allows sound engineers to break out multichannel files into separate clips or choose custom channel configurations.

Team Projects gets a few updates, including Dynamic Link support and better project management tools for editing teams that work in various locations.

What updates are you most excited about? Let us know in the comments below.