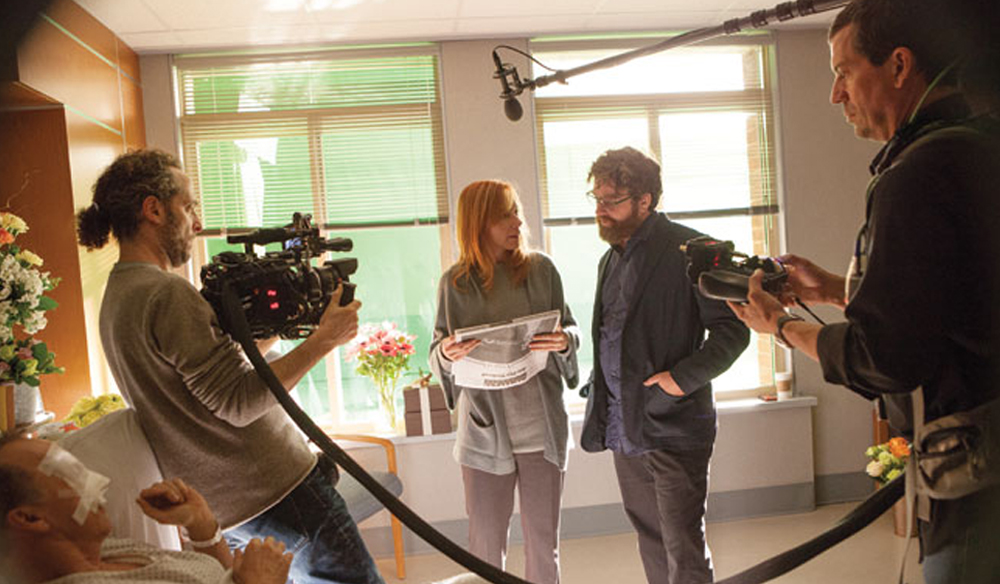 Film Edits Hidden in Front of Your Eyes

See how Hollywood directors and editors hide their cuts right in front of the audience.

Top image via The Hollywood Reporter

Sometimes editors can end up with two scenes that work together story wise, but feature jump cuts or hard edits between clips. Other times a director may want to keep a scene moving, so they plan intricate long takes that include hidden edits.

The key to properly continuing the story is to disguise the edits by distracting viewers. Let’s take a look at some of the not-so-great uses of the technique, as well as some of the best hidden film edits.

Where the original Star Wars trilogy used extensive practical and physical VFX, the Star Wars prequels were shaped by digital technology that had never before existed. Rather than building set pieces, the team at Lucasfilm built computers, software, and digital elements. Some of the pioneering programs they invented are only now reaching consumers. Just last year, Adobe brought the morph cut to consumers.

In the 2005’s Revenge of the Sith, one of the most apparent uses of the the morph cut comes from this scene with Supreme Chancellor Palpatine and Anakin Skywalker. Notice on the right side of the frame how Anakin’s head slowly tilts forward. This is actually a combination of two separate takes morphed into a single scene. The biggest giveaway is the hair over Anakin’s forehead — watch as his hair line morphs. (You can click on the image to enlarge.)

The Star Wars prequels have become notorious for their liberal use of morph cuts and blending of different takes. At the 45-minute mark of this making of The Phantom Menace documentary, co-editor Ben Burtt and director George Lucas discuss this “cyber-directing” technique while creating a scene.

A quick note about this technique, just because you can fix it in post – doesn’t mean you should.

2004’s Anchorman was an absolute improv melee on set. While cameras rolled, many of the industry’s best comedians dueled it out with nonstop jokes. While that can be great for all the options in storytelling, it can be an absolute nightmare for editors.

Sports broadcaster Champ Kind, played by David Koechner, spitballed several minutes worth of dialogue during his catchphrase WHAMMY! scene. When edited down for the final film, the editors were stuck with a really rough jump cut. To disguise the edit, they threw in a quick WHAMMY! graphic to divert your attention.

Keep an eye on the green dress in the background and you’ll see where the jump cut is hidden behind the graphic. (Click image to enlarge.)

Scene from Anchorman via Dreamworks

Now, Anchorman is not the best example of this technique, but it does prove that the struggles of Hollywood editors aren’t much different from your own. This cut could have been avoided by having another camera angle to work with, but since this scene was shot with a single handheld camera — there weren’t any other camera options available.

Back to the Future — Split Screen Composite

What about films that pull off the hidden edit so well that you can’t see them? It’s debatable to call this a VFX composite vs. an edit — but for the sake of the article, I’ll categorize it as so. Especially since the composite is used as a transition to edit the two clips together.

In this sequence from Back to the Future Part II, the flying DeLorean lands in the alternate 1985 dystopia. Two separate shots, one a VFX miniature and the other a life-size on-set vehicle, are edited together with a lamp post. To the right of the post is the VFX sequence that uses a three-foot DeLorean miniature with puppets inside. To the left of the post is the full-size Time Machine. (Click image to enlarge.)

Scene from Back to the Future Part II via Universal Pictures

ILM camera operator Peter Daulton pulled off the sequence perfectly by matching the lighting of the miniature with the light on set, seemingly creating movie magic on screen.

The Continuous Takes of Rope and Birdman

There are plenty of films featuring long takes, but many times those sequences feature hidden edits. Films like Goodfellas (or shows like True Detective) meticulously follow characters non-stop for several minutes. Other films, like Children of Men, rely on hiding edits right before your eyes.

Two of the most talked-about films using continuous takes are Alfred Hitchcock’s Rope and Birdman by Alejandro G. Iñárritu. The primary difference in the two productions: the types of available equipment.

Hitchcock was producing Rope in the late 1940s. The movie was shot on a giant camera with 35mm film, which limited takes to 10 minutes. This is why his film features many push-in to black or static shots of inanimate objects. (Click image to enlarge.)

Scene from Rope via Warner Bros.

Scene from Birdman via Fox Searchlight

Unlike Rope, the film Birdman also features many whip pans and even an occasional VFX motion blur. The technology available allowed them to pull off countless edits that are seemingly naked to the human eye. Cinematographer Emmanuel Lubeski had experience working with whip pans and VFX edits when working on the tracking shot car scene in Children of Men.

What techniques do you use to hide your edits? Fades, light leaks, VFX? Let us know in the comments below.