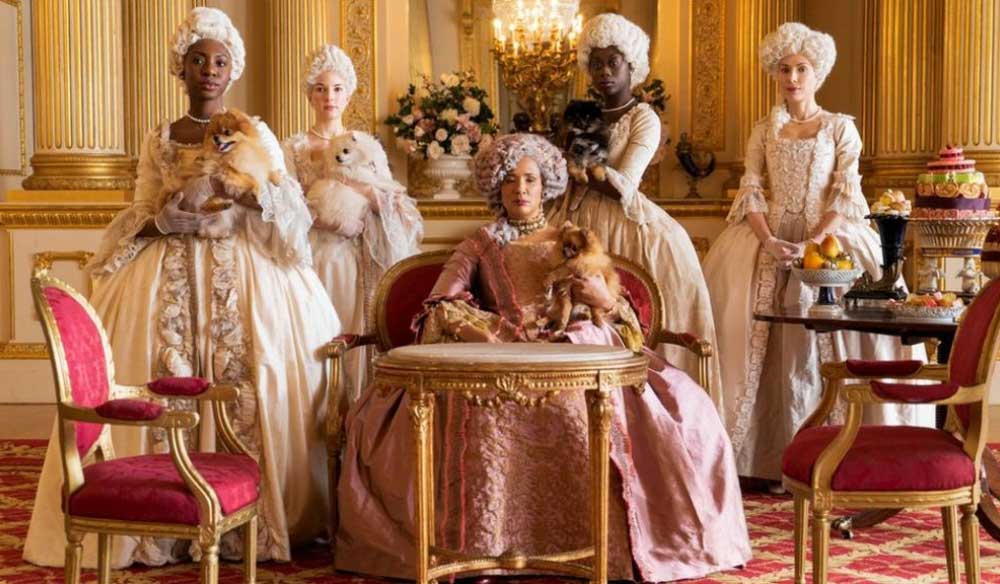 What effect does the essential absence of race have on the story being told? And what does that tell viewers about race as a result?

Not four weeks after premiering on Netflix on Christmas Day in 2020, Bridgerton, the streaming service’s Regency-era television series straight from the Shonda Rhimes‘ Shondaland studios, made itself a cozy spot in the cultural zeitgeist. Adapted from a series of wildly popular romance novels, the 17th century drama quickly became the must-see show to binge. After all, the fashion was immaculate and the music took modern hits and spun them on their heads a la harps and violins. But, it was the show’s use of colorblind casting—allowing actors of any background to be cast in a role—that earned it a special kind of attention.

Colorblind Casting and Worlds Devoid of Characters of Color

This was for good reason. Media with historical, sci-fi, or fantasy-heavy settings commonly make it so people of color rarely exist in those worlds. The logic there usually falls into the blunt, but true mindset that entire intergalactic races and dystopian civilizations can exist on screen, but having Black or brown characters present makes the diversity too “forced.”

Cue the internet chatroom and forum backlash around John Boyega’s first appearance in the trailer for 2015’s Star Wars: The Force Awakens. Including a Black actor in a main role isn’t an example of colorblind casting. But, the very act of inclusion brought about racism and criticism from many fans of the series.

The practice of colorblind casting has only increased in popularity and commonality in the years since. The Broadway musical Hamilton utilized rap and a largely POC cast to tell the life story of politician Alexander Hamilton. In a similar vein, the musical Frozen made the Scandinavian character Kristoff a Black man in every cast. Hulu’s 2020 series The Great, about Catherine the Great rising to power in 1700s Russia, cast Black and Indian actors as high ranking members of the Russian court. More and more, television shows are increasing how many actors from minority backgrounds appear on screen. This is most obvious in reboots of traditionally white-heavy shows like Gossip Girl and Charmed.

But, what does using colorblind casting do in the long run for shows based in historical events and fantasy lands? With colorblind casting occurring in major forms of entertainment, what effect does the essential absence of race have on the story being told? What does that tell viewers about race as a result?

What Is Colorblind Casting, and How Has It Been Used in Media?

Taking place in English high society in the 1800s, there was no question that Bridgerton would feature white actors in the roles of aristocrats, viscounts and viscountesses, dukes and duchesses, and as English royalty. It was the casting of Black actors in these same roles—bearing titles they wouldn’t have had in reality—that ignited the conversation surrounding colorblind casting for television shows rooted in historical events like the London social seasons of the 17th and 18th century.

With race directly correlating with how much humanity a person is awarded in the real world, Bridgerton received mixed reactions from fans and critics for its use of colorblind casting. But, it’s far from the first piece of media to do so. The act of not taking an actor’s race, gender, or sexuality into account for a role dates back at least five decades in pop culture.

Making History in Film and Television

Noma Dumezweni was cast as Hermoine Granger in the original West End and Broadway productions of Harry Potter and the Cursed Child beginning in 2016. While Granger is depicted as white on covers of the book series and in all eight films, Cursed Child cast Dumezweni, an African-British woman, to portray her. When Star Trek first premiered in 1966, actor Nichelle Nichols was cast in the groundbreaking role of Nyota Uhura. She was one of the first Black actors to play a role as major as Uhura’s on television. It was a move so inspirational to the Black community that greats including astronaut Mae Jemison and actor Whoopi Goldberg have spoken about how that representation played a role in how they saw themselves. Eartha Kitt famously starred as Catwoman, a canonically white role, in the final season of the 1960s TV series Batman.

Shows like Star Trek and Batman aired during the Civil Rights Movement in the U.S. Diverse representation on screen was happening at the speed of Black people fighting to be seen as equals in real life. The casting of actors like Nichelle Nichols and Eartha Kitt helped make that happen. Their presence made diversity mainstream, and created casts that were more reflective of the real world.

Bridgerton and Beyond: The Role of Race in Colorblind Casting

What the colorblind casting approach brought to Bridgerton was a world where Black people defied historically accurate baggage and lived their lives as highly respected individuals with power. For Regé-Jean Page, a British-Zimbabwean actor, portraying a duke had no effect on his character’s ability to hold that title or live a life akin to white English royals. Golda Rosheuvel, who is Guyanese-British, was able to portray Queen Charlotte without her race being called into question. The real Queen Charlotte may have also been a Black or mixed-race woman, according to historian Mario De Valdes y Cocom. No one in the Bridgerton world bats an eye when Black characters like Adjoa Andoh’s Lady Danbury and Ruby Barker’s Marina Thompson throw and attend lavish events and climb social ranks just as any white character would.

The (Slowly) Changing Demographics of Film and Television

Diversity and representation on screen has been on a slow incline in recent years, especially for Black actors. According to a report from Nielsen on diverse representation and inclusion on TV in 2020, Black actors made up 18.1% of characters on shows on broadcast TV, cable, and on demand. Representation was significantly lower, however, for Latinx, South and East Asian, and Indigenous actors. Actors from these demographics appeared at 5.5%, 4.9%, 2.2%, and 0.4%, respectively. The increased presence of Black actors on screen is a step in a general direction. But, it’s one that’s quickly overshadowed by the 81.2% of white characters on screen.

What Colorblind Casting Means to Viewers of Color

Colorblind casting in Bridgerton and similar shows was, and still is, exciting to a degree. It’s about what could be for the viewers of color watching—living the life of a royal, one of respect and privilege, isn’t impossible in these worlds. There’s opportunity for Black characters to be more than just the help or slaves, despite the slave trade not being abolished in England until 1833, twenty years after Season One of Bridgerton. (This is a romantic drama streaming on Netflix. We can look the other way for a few episodes.)

The presence of non-white people in England during this time period makes the setting more believable, even if that belief only goes so far before artistic liberties kick in. Though brief, race also does come up as a topic of discussion in Bridgerton. In a conversation between Lady Danbury and Simon, the older woman recounts how Queen Charlotte marrying King George III and assuming her status helped “us” integrate further into society.

Eartha Kitt as Catwoman made her character, a Black woman, an equal to Batman and Robin. What’s more, she did so during a time period when diverse representation was largely considered an afterthought, not a necessity. Every Black actor playing Kristoff in the Frozen stage musical showed that it was the personality of the character, and not his race, that made audiences love him. Using colorblind casting to create worlds where race doesn’t exist normalizes non-white races in traditionally all-white spaces, changing the conversation about what “normal” is.

History and Fantasy in Colorblind Storytelling

Ultimately, what colorblind casting does is ask the audience for suspension of disbelief. In reality, living in a world where race isn’t an issue is impossible because to be non-white is political. Despite Queen Charlotte, the Duke of Hastings, Lady Danbury, Marina Thompson, and various other Black background actors being as privileged as their white counterparts with no consequence, it’s largely a fantasy. This was rarely the case in real life.

Even after the abolishment of the slave trade and Black people lived as free individuals, straight, white men wrote history to favor straight, white men. To be white is to be the standard for beauty, power, and humanity. For shows like Bridgerton, Batman, the Harry Potter and the Cursed Child and Frozen musicals, to ignore that fact shows that they are truly fantasy.

Adjoa Adoah, who stars in Bridgerton as Lady Danbury, discussed that sentiment in an interview with Harper’s BAZAAR in January. Adoah notes that while she’s “not interested in colorblind casting,” Bridgerton “is a Shonda Rhimes drama. It’s not a historical documentary . . . the show takes historical fact, and then it runs with it. And, it makes it into its own thing . . . Slavery is still happening across the world. There’s a level of poverty and destitution that’s happening across the world, and none of these things are featured in this show.”

For colorblind casting to exist free of in-depth analysis from viewers is more than studios can ask for. To not see race erases its reality—what’s actually lived and a specific experience comes with that.

The Fate of Minority Stories in a Future of Colorblind Casting

Colorblind casting isn’t a perfect strategy, at the end of the day. It’s an approach to storytelling that has its strengths and its flaws, and it’s here to stay. But, there’s no doubt about its impact. It boosts the visibility of non-white actors in media and, as a result, large-scale audiences viewing major works become familiar with a face unlike their own. Bridgerton will continue down that path following the casting of Indian-British actor Simone Ashley as major love interest Kate Sharma—a white character in the book series who had the last name Sheffield—in season two of the series.

But, for every instance of race not being an issue in TV, movies, and theater, the question of where the minority experience goes is raised. If multiple stories are erased, whose story takes priority and is told in the end? To be non-white is to invoke history and you can’t dress that up and distract from it.

For more film and filmmaking reviews and advice, check out these articles: