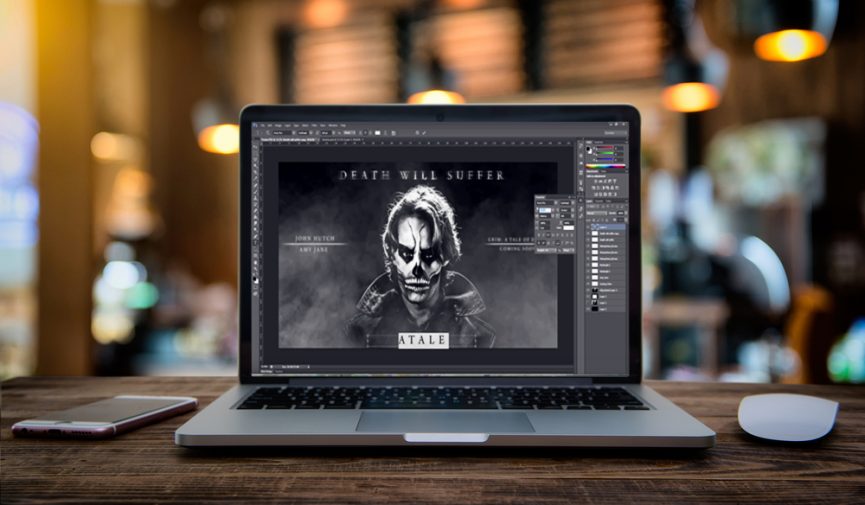 Create Your Own Movie Posters Quickly and Cheaply

You can create your own promotional materials for your video project with equipment you already have. We’ll show you how.

While filmmaking and photography have a lot in common, the skills you develop working in one aren’t always the skills you need to work in the other. When you can, it’s best to seek out a professional for services you need outside your skill set. However, if you’re working on a passion project with no budget and no photography equipment (such as flash lightning), you need to work with what you have when it comes to promotion. Let’s have a look at how you can create a poster using your filmmaking camera, a few continuous lights, and a black backdrop.

I shot the two teaser posters in this article in my bathroom and living room. While they’re from different projects, the style for both is the same: low-key and moody. With this basic setup, this sort of image is your easiest option. 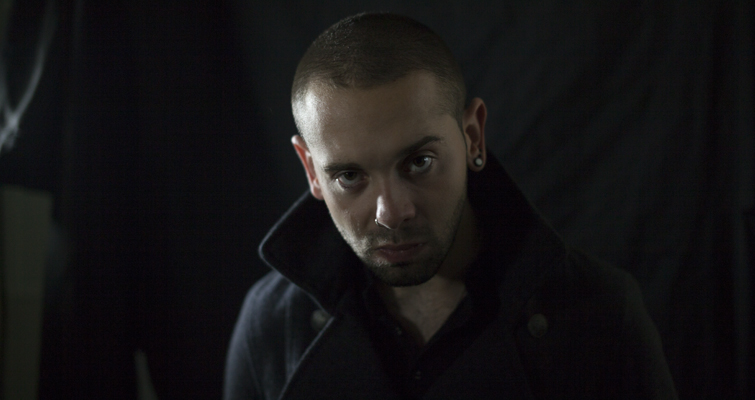 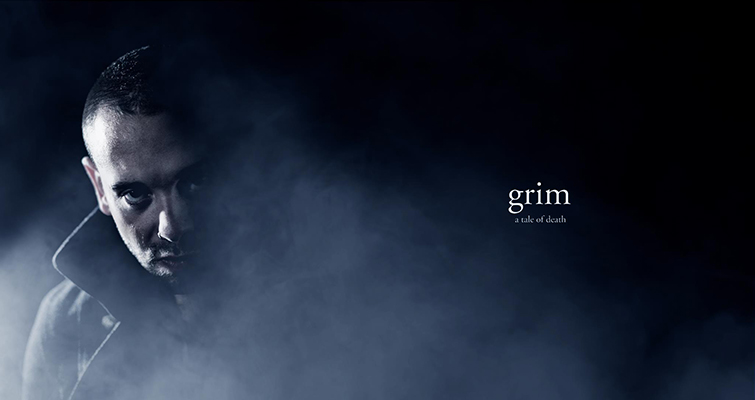 At the time, I didn’t have a DSLR; I only had a RED ONE MX. So I took a cue from Greg Williams’s photoshoot of Megan Fox for Esquire — he used the RED ONE and continuous lighting. Williams’s shoot was a few years ago when the luxury of pulling a 4K still required professional cinema cameras. You can now do this with the Gh4 and many other mirrorless and DSLR cameras. The primary issue with capturing stills with continuous lighting is that without a large light source, it’s hard to replicate the luminance of a flash.

If you’re unsure about the differences between flash and continuous lighting for photography, check out the following video.

To create your own promotional material without a proper photo shoot, you’re going to need two lights. One light needs to be a rim light to separate your subject from the background, which is probably the most important part of this process. Your other light is a single key light. You can set this up for chiaroscuro lighting, or it can be a ¾ frontal key light. Ultimately, it’s your choice. However, the idea is that you only want one light to illuminate your subject. Otherwise, we’re going to have too much fall off onto the black backdrop, and it’s going to be a hassle to clean up in post-production.

You can watch the entire process in the following time-lapse.

In the following example, I’ve used a small Yongnuo YN 160 Pro LED positioned in a ¾ key light fashion. Since the light isn’t that powerful, we’re not going to get a lot of light spill on the backdrop. This is one of the significant differences between using constant light and flash. The continuous light emitting from this small device just doesn’t give the same amount of luminance as a small flash. 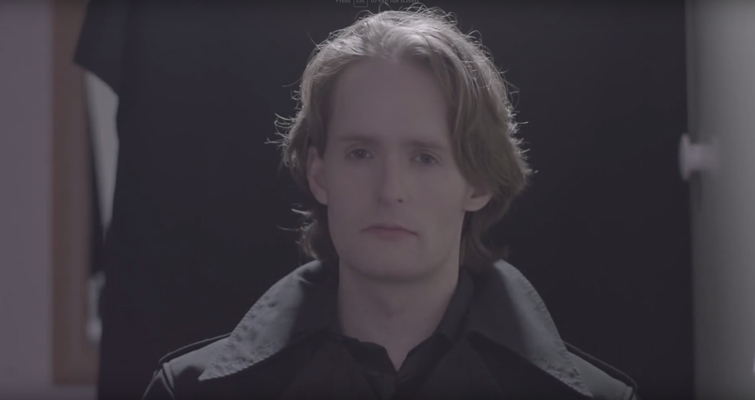 Since we’re going to pull a still from a video clip, you want your actor to move their head in various positions and poses after you hit record. Remember, if you’re just filming at 24fps, you’re getting 24 photographs to work from in just one second. However, you do need to be careful to avoid motion blur at this frame rate. You can increase the camera’s frame rate to prevent blur, but you will have a lot more material to shift through.

Since the light is a small LED, I’m moving it while the actor moves to find the best position and look I want.

The following works great for me. 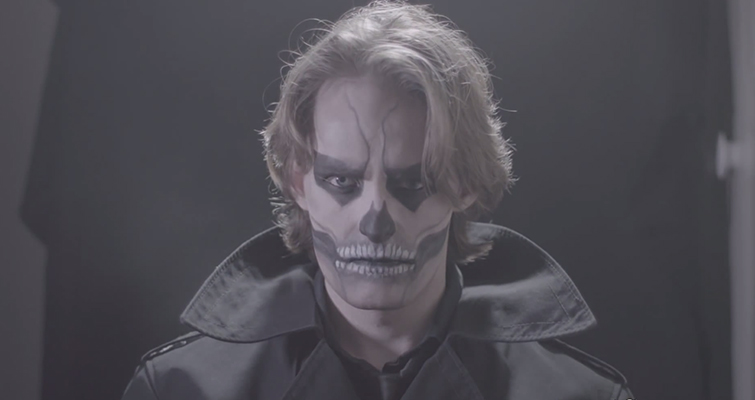 Since this is an R3D file, I’m going to open it up in REDCINE-X and make a few adjustments to the base image. Primarily, I’ll be adding contrast and color correcting the image, even though it will later become black and white. With the image corrected, I’m going to save footage as a still file and bring it into Lightroom or Photoshop. 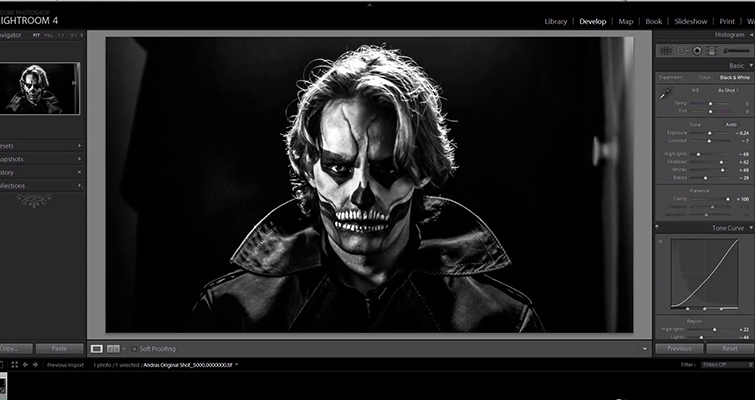 Essentially, we’re going to crush the blacks. You need to lower the shadow region in the curve selector, increase the blacks with a slider — or whatever option your application of choice offers. This will drop a lot of your background into darkness. However, we’ll still want to darken the composition. In Photoshop, use the burn tool, and set it to only affect the shadows. Since we have a rim light directly behind the subject, we don’t need to worry about it affecting the clothes. In fact, your subject can wear an entirely black T-shirt, and as long as you have the rim light in place, this method will still work. 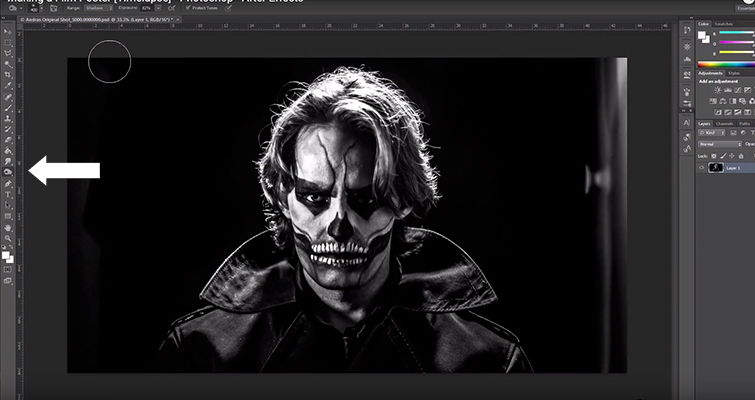 Once you have removed any visible sections of black material with burn, create a black solid to place on either side of the image. 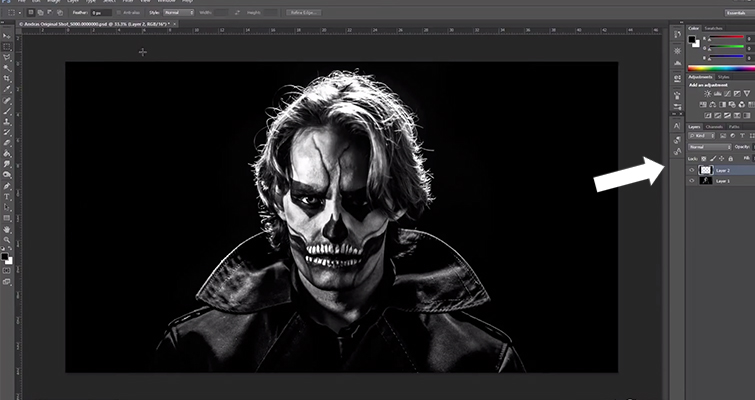 Now you should have a picture with an infinite black background, ready to customize and manipulate. I brought my poster into After Effects and played around with Video Copilot’s Action Essentials pack to add a few layers of fog. 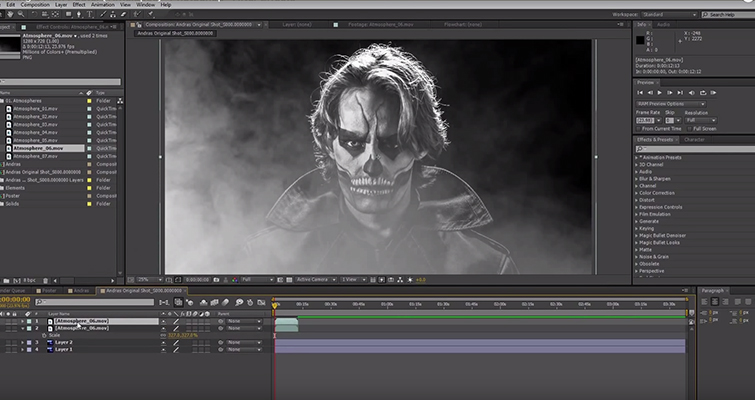 No flash photography, no studio, and in my case, not even a proper still camera. The situation is not ideal, but using some basic filmmaking tools, you can very easily make your own promotional material. If you have more space, you could set up more lights and produce even better results. However, sometimes being in a squeeze can really help you get creative with the bare minimum.

If you’d like a free movie poster template to help you polish your promotional material, check out the PremiumBeat free movie marketing pack. You’ll get an easy to customize Photoshop template and an additional template to create custom trailer ratings.

Do you have any tips for making your own promotional material? Let us know in the comments.