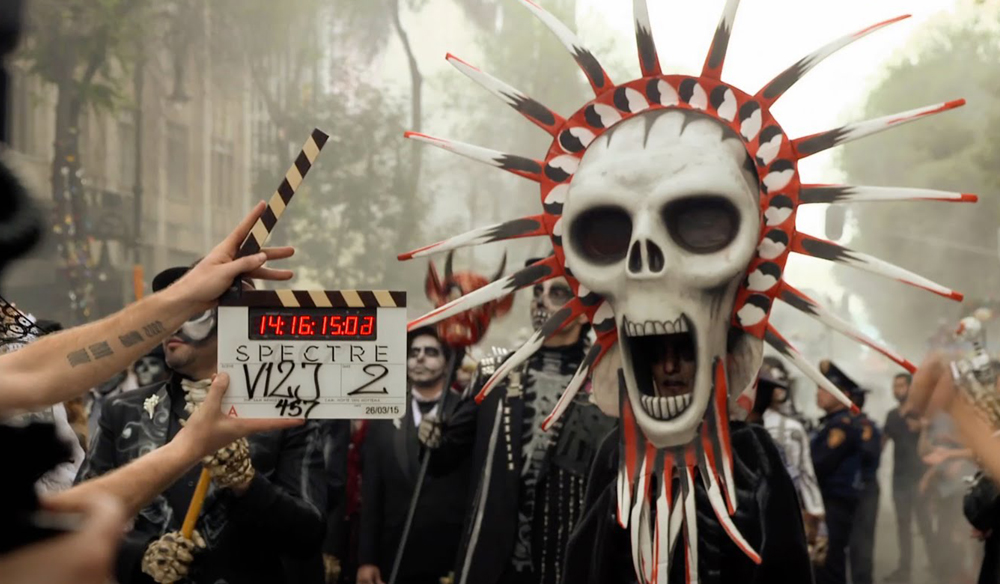 Major studios are seeing the benefit of featuring other cultures in their blockbuster films. Let’s take a look at one of the most popular topics: Mexico’s Día De Los Muertos.

Cover Image: Set of Spectre via 007

Just like the Mexican directors and Mexican cinematographers currently dominating the US box office and award ceremonies, Mexican culture is also finding the spotlight in film. Mexico’s biggest annual event is Día de los Muertos – Day of the Dead. The celebration has now made its way into several major feature films.

For many in the United States, The Three Caballeros was their first look at the culture and history of Mexico. The film followed Donald Duck as he travelled to Mexico, brilliantly blending animation and live footage shot throughout the country.

Even though Mexico had been featured in animated films and countless westerns, Día de los Muertos was not a subject often presented. Until recently, the celebration had been seen as taboo. American and western audiences didn’t openly talk about death, let alone celebrate it. Before continuing, we will need to cover a little history of Día de los Muertos. 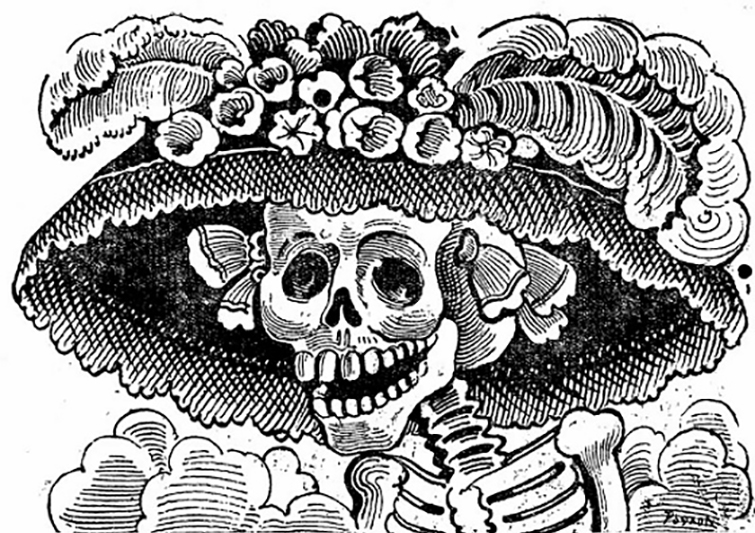 Día de los Muertos (actually just called Día de Muertos in Mexico) is a holiday that celebrates friends and family members who have died. The purpose of the holiday is to remember a person’s life and to pray for their continuing spiritual journey.

The celebration actually dates back thousands of years to an Aztec festival dedicated to Mictecacihuatl, the Queen of the Underworld. The month-long celebration originally took place during the 9th Aztec month. After the Spanish colonization and introduction of the Roman Catholic church, the festival moved to align with All Saints’ Day and All Souls’ Day.

Día de los Muertos begins on October 31st. On that day, families build altars with offerings — called ofrendas — for their dead loved ones. The altars are decorated with marigold flowers, sugar skulls, bread, and the favorite food and drinks of the deceased. These ofrendas are typically built at home, and often transported to the cemetery. 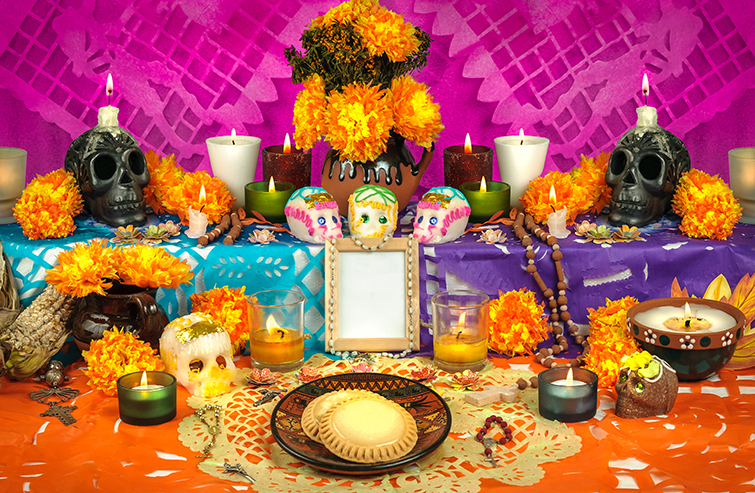 The traditions vary among the towns. In fact, since the celebration is steeped in Aztec culture, it was only celebrated in central and southern Mexico. Northern Mexico didn’t truly celebrate the day until the 1960s, when Día de los Muertos became a national holiday. In 2003, the United Nations Educational, Scientific, and Cultural Organization (UNESCO) added Día de los Muertos to the list of the Oral and Intangible Heritage of Humanity.

As the celebration became widely celebrated it Mexico, it was also gaining traction elsewhere, too. Countries like Brazil and Spain had their own versions of the celebration. As the influx of Mexican immigrants to the United States grew, so did the influence of the culture. There was certainly a backlash, as was common with any type of major immigration to the US, but we are now starting to see Mexican culture celebrated in mainstream media. 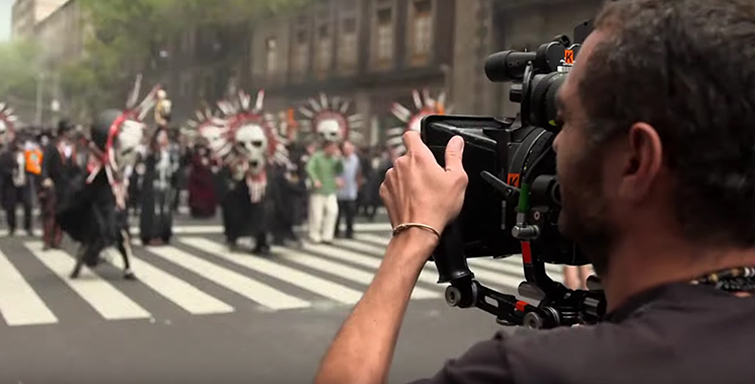 As Mexican culture has been embraced, particularly in the southern portion United States, Día de los Muertos has been growing in popularity. One of the reasons why is the introduction of the celebration to children. Kids had always favored Halloween and ‘Trick or Treating’ for candy, but over the past few decades, children have been the first to learn about Día de los Muertos. The celebration was making its way into animated films.

In the early 1990s, The Halloween Tree made its way onto television screens across the country. The film actually dealt with some dark aspects, as a group of kids tries to save the soul of one of their friends. In doing so, they learn the origins of Halloween celebrations all over the world. The big final set piece takes place in Mexico during Día de los Muertos. 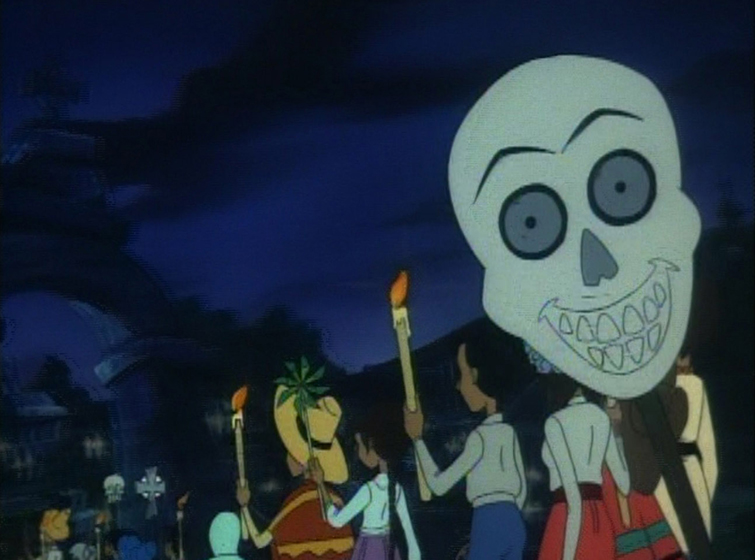 The children each eat a sugar skull with their name on it, and in doing so they overcome their fear of death. Therefore death loses its power over them in life, and they are able to save their friend.

The Halloween Tree was adapted from a book written by Ray Bradbury, who narrated the film. It also featured the voice of of Leonard Nimoy. The show was a monster hit, winning a Daytime Emmy for Outstanding Writing in an Animated Program and a nomination for Outstanding Animated Children’s Program. 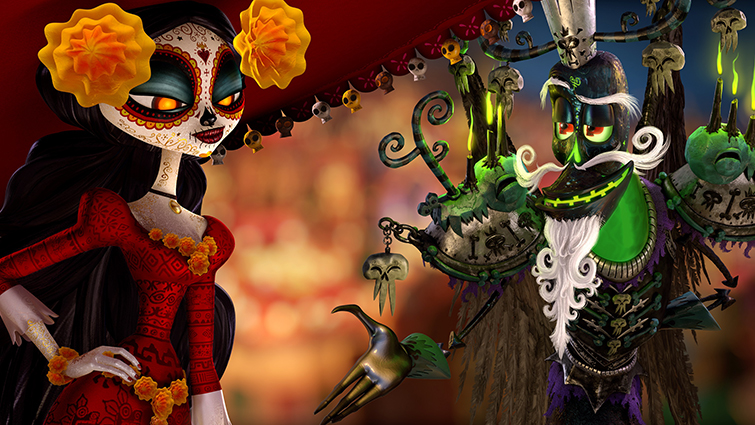 Mexican director and producer Guillermo del Toro wanted to bring Día de los Muertos to the screen like never before. Unfortunately, the film turned out to be harder to create than originally planned. Del Toro teamed up with animator Jorge R. Gutiérrez to create the film.

It took a while to find financiers. We were very obscure. But I think Jorge is such a good director, and the world we have created is so beautiful, that eventually people went, ‘We want to do this.’ – Guillermo del Toro

The film was first offered to DreamWorks, who passed on creative differences. The up-and-coming studio ReelFX jumped at the chance to make the film. They cast Mexican star Diego Luna, as well as a cast of Hollywood heavyweights like Zoe Saldana, Channing Tatum, Ice Cube, and Ron Perlman.

Jorge Gutierrez wanted the film to look just like the incredible concept art. He also did not allow his animators to go on research trips to Mexico, fearing they would only be influenced by the tourist aspects of the country. He drew from his own personal memories and experiences to help create the vivid and colorful world.

The result was absolutely stunning. The film does suffer from some traditional family comedic aspects to appeal to wider audiences, but the animation alone was other worldly. The character design was fantastic, and once the characters traveled into the Land of the Remembered, the colors and architecture really did come to life. 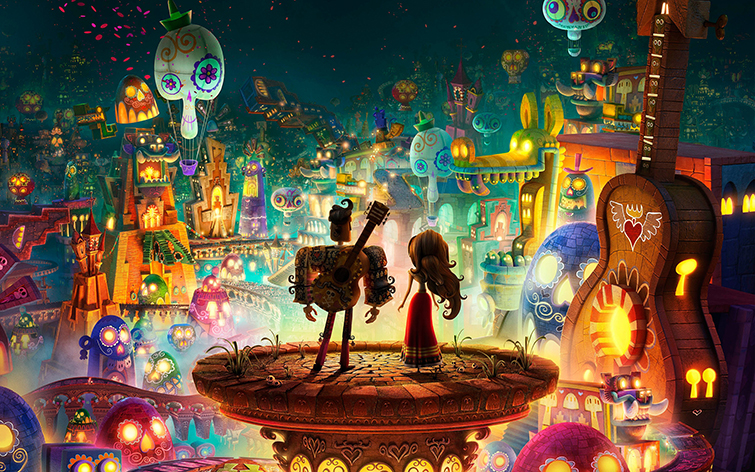 In this behind-the-scenes video, you can see director Jorge Gutierrez work with his team of animators on all the intricate details of the animation. 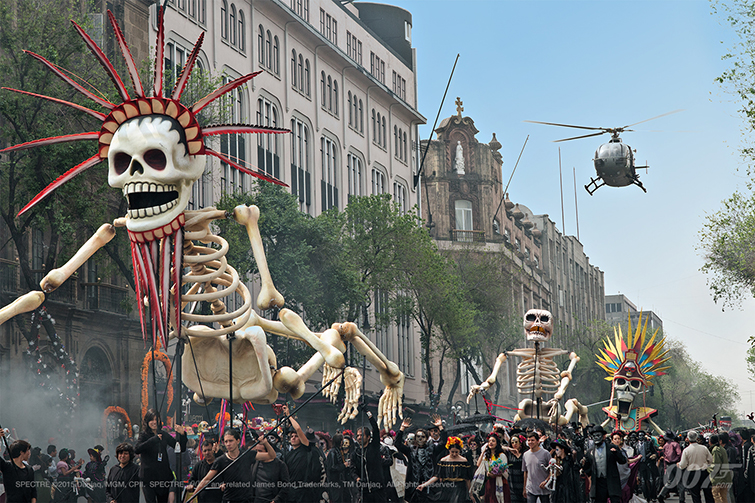 The next James Bond film, Spectre, will actually begin in Mexico during a Día de los Muertos celebration. Director Sam Mendes wanted the audience to be dropped right into a very rich environment at the start of the picture.

For six months, the crew constructed incredibly elaborate set pieces. This included the giant parade floats, down to the individual jackets and dresses – all of which were custom made for the film. The goal was to make sure that death was prominently featured in every costume. Over 1500 extras were used on set. The face paint alone required a team of makeup artists to paint 20 extras at a time.

It’s gonna be the most visually exciting opening to a Bond, ever. – Naomi Donne

Now Disney and Pixar are working on a Día de los Muertos film slated for 2017. Coco is a film that will follow a 12-year-old boy named Miguel, who discovers a mystery leading him to the world of the dead.

The film is only in pre-production, yet Disney made a major PR disaster when they filed a copyright claim on the term “Día de los Muertos.” There was a huge outcry from the Mexican community, and many campaigns were launched calling for Disney to remove their trademark request.

The company did so, admitting they were only trying to copyright potential film titles. Following the outcry, Disney hired Mexican artists for consultation on the film.

This is only the beginning for Mexican culture in film. The Latino audience is a major player in ticket sales, and studios are taking notice. Much like the globalization of blockbuster films, studios are seeing the benefits of including worldwide cultures in their films.