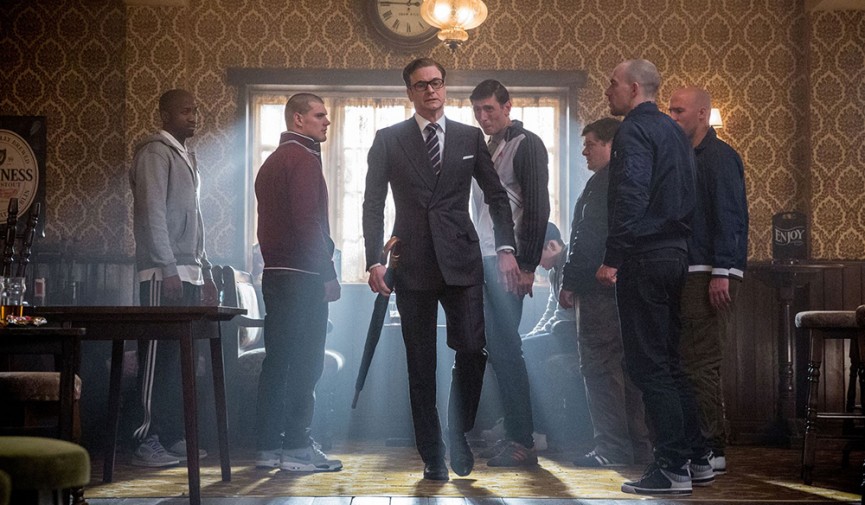 Learn from Mission Impossible: Rogue Nation editor Eddie Hamilton as the ins and outs of his Avid workspace are revealed.

Eddie Hamilton is swiftly becoming one of the go-to editors for summer blockbuster tent-pole action epics. Having cut both Kick-Ass films, X-Men: First Class, Kingsman: The Secret Service (and likely the sequel too), and the fifth Mission Impossible outing, Rogue Nation.

Although he must be stupendously busy, he’s also very generous in opening up his edit suite to those looking to learn from his extensive experience, which is a real blessing for the rest of us!

For those interested, here’s my #Kingsman #Avid #MediaComposer desktop, two 30″ displays both at 2560×1600. pic.twitter.com/T5hQl3hSLl

He recently tweeted a 5K screen grab of his Avid workspace, which is actually two HP Z30i 2560 x 1600 resolution displays stitched together. In this post, I’ve pulled that image apart to reveal a few things you can learn about the way Hamilton organizes his workspace and polishes his edit. All of the comments I’m making about what Hamilton’s doing are my best guesses, and not solid fact!

You can also download high resolution tifs of all seven reels of Kingsman: The Secret Service in the dropbox link in the tweet above. 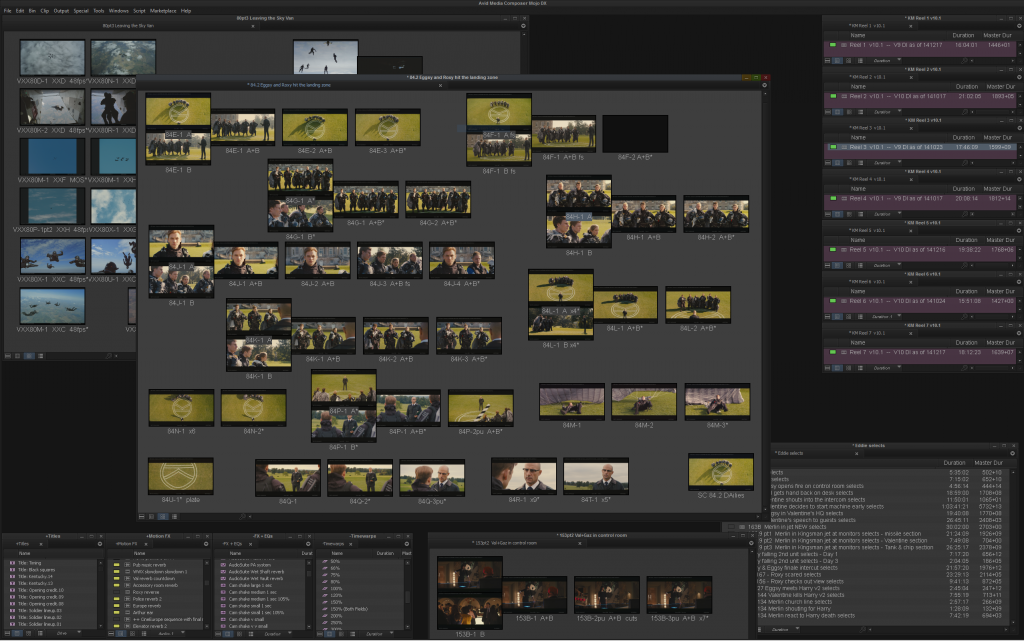 To help us get started, I’ve split the image back into the two screens. In this first screen, Hamilton has three bins of footage open with the thumbnails displayed, a bin for each of his reels open in the top right hand corner, four bins for some useful editing elements in the bottom left, and his selects bin in text display mode in the bottom right. Let’s look a little closer at a couple of these. 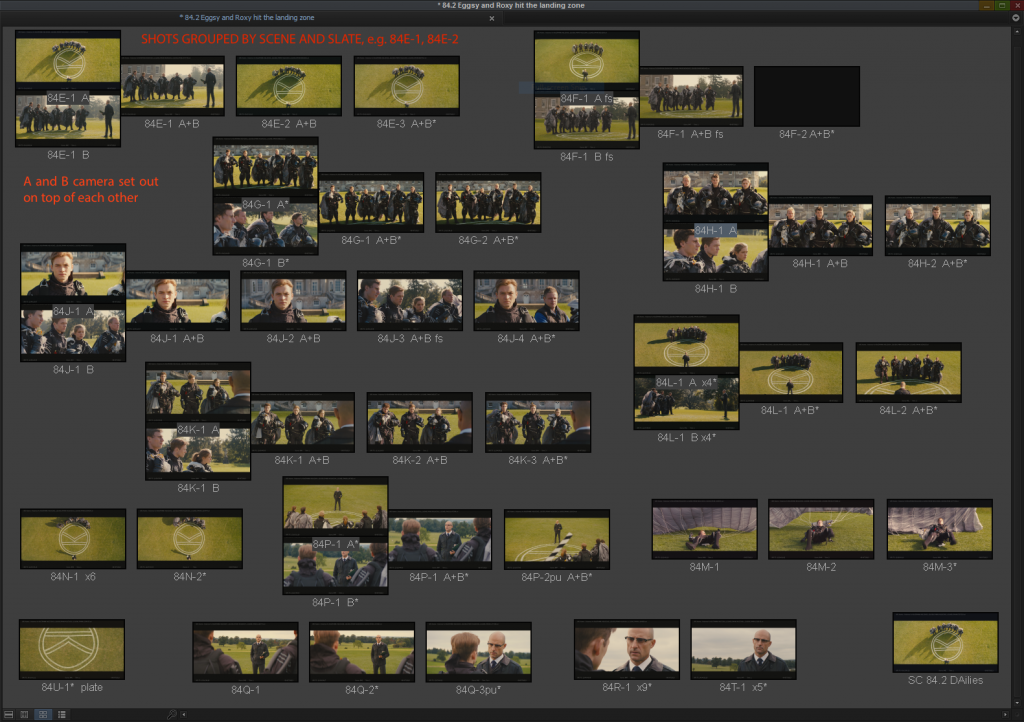 In this close up of the main footage bin that’s open, you can see all of the dailies for scene “84.2 Eggsy and Roxy hit the landing zone.” The footage has been organised by slate number and grouped accordingly, so all the E setups are together, all the F set ups etc. Where there are two cameras, both are laid out at the beginning of the grouping, so it’s clear what the shots are of. I’m assuming that the A+B means that both cameras are in that thumbnail for the rest of the takes, to save on screen space.

Organizing the footage in thumbnail view makes it much faster to find the shot you are looking for, as an image really is worth a thousand words. Furthermore, using the thumbnail view allows you to create ‘storyboard edits’ right in your footage bin. You can read about how to do that in Premiere Pro in this previous PremiumBeat post.

I’m guessing that the x9 or x5 symbol stands for nine attempts at a line or set of dialogue where the camera has rolled without stopping. In the very bottom right hand corner there is a clip “SC 84.2 DAilies” which presumably contains all of the dailies for that entire scene in one go, which makes it much easier to scrub or shuttle through everything in one go, rather than opening each sub-clip. 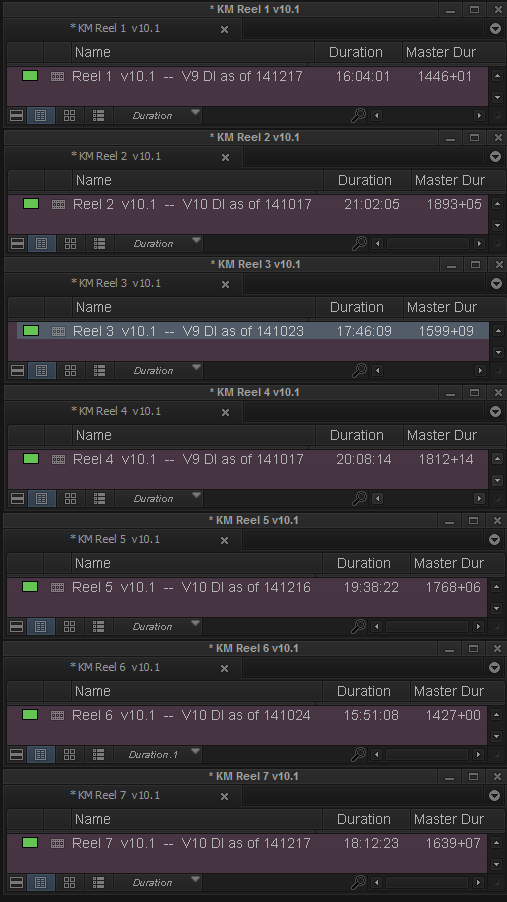 At this stage in the film, where the cut is looking pretty complete — work has already begun on the Digital Intermediate (DI), after all — it’s important to be able to jump around quickly to different scenes in the film to make changes, update VFX shots as they come in, or rework problem scenes based on audience feedback.

Whatever the reason, it’s a great idea to have all of these timelines readily accessible so that when the director is sitting behind you, they are instantly accessible, rather than having to rummage through deep folder stacks.

This close up of Hamilton’s workspace also gives us an opportunity to check out his naming convention. Normally the * or an empty space would mean that the following named clip or timeline would sort to the top of the bin, when arranged in alphabetical order. Presumably this is why these bins are named in this way. Also adding the date into the name of the timeline quickly lets you see which sequence has been worked on most recently. In this case, Reel 6 has had the most recent DI work performed on it.

In Reel 4 you can see that it’s tracking as v10.1 of the cut, but that the DI is still in version 9. Also having the duration column be the very first thing that you see allows you to quickly add up the running time of the film, and see if any one section is much longer than the rest.

In this section of Hamilton’s workspace, you can see that he has four bins of ready-made titles, sound effect presets, visual effect presets, and timewarp speed remapping settings. Having everything pre-prepared and laid out in an organized way must save Hamilton countless hours when applying these effects through the film. Creating your own tool kit of preferred settings is an easy thing to do, but I’ve not often seen many editors take the time to do it.

How a Hollywood Editor Organizes Their Workspace 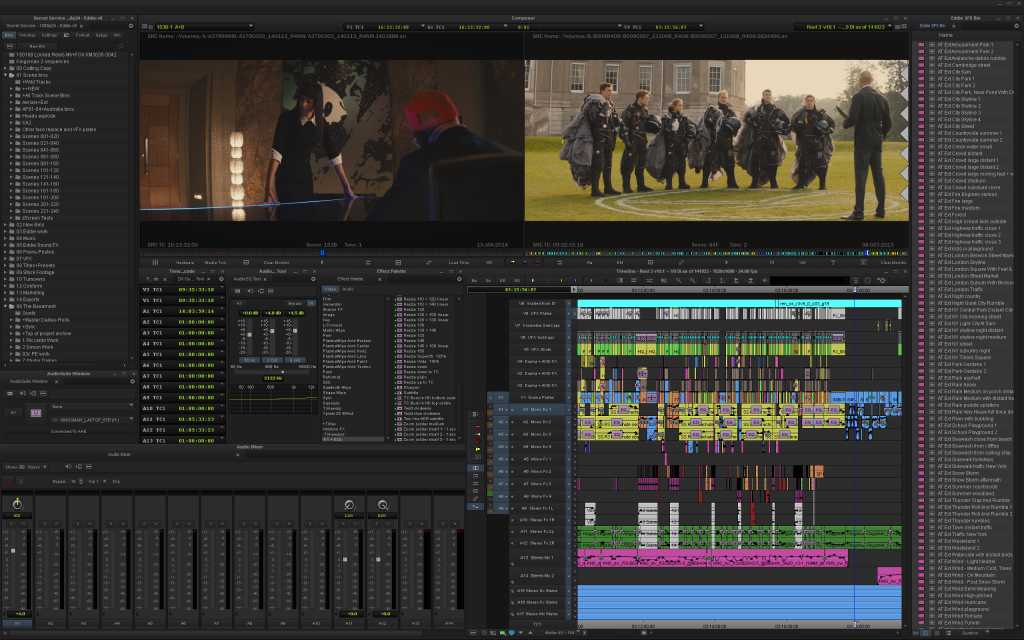 In this screengrab from Hamilton’s second monitor, we get a really good look at the layout of his main windows — including his master bin in the top left, his timeline, source and preview monitors, and a few other essential items too.

It’s possible that Hamilton was going a little deeper into his sound work (something he prides himself on), given that there’s a huge list of sound effects open on the right side of the screen, and that the audio mixer is taking up quite a bit of space that could otherwise be given to the timeline itself. Again, lets take a closer look at some of these elements.

The speed with which you can readily understand the layout of Hamilton’s master bin is a result of the clear and simple organizational structure. Within only minutes, you could probably find what someone was asking you for, without even really knowing much more about the film.

The numbered folder structure essentially follows the process of the film’s post-production, with turn overs, conform, and marketing coming at the end of the list. It’s interesting to note a few other details from this image.

Firstly, ’99 The Basement’ seems to be the place where Hamilton keeps the work of his assistants (Riccardo Bacigalupo, Tom Coope, Rachel Durance and Simon Chubbock) while working in a shared space. There is also a collection of ‘Goofs,’ potentially for DVD extras, that must have been collected as the dailies came in, otherwise it would be a nightmare to try to weed these out at a later date.

Simple file naming conventions make everything immediately comprehensible, and the use of the + symbol brings key folders to the top of the list. Looking at this screengrab from the first Kingsman film, it’s also curious to note ‘Kingsman 2 sequences’ at the top of the bin. Perhaps something to do with the sequel?

Another thing that’s telling about the editor’s workload is that they are the central hub through which all other departments work comes and goes. The editorial team has to deliver the turnovers, create temp composites and manage the VFX plates and finished shots (via Ben Mills the VFX Editor), and provide material to marketing and, during production, the studio with dailies. I’m sure competent assistants are the key to keeping all of this as stress-free as possible. 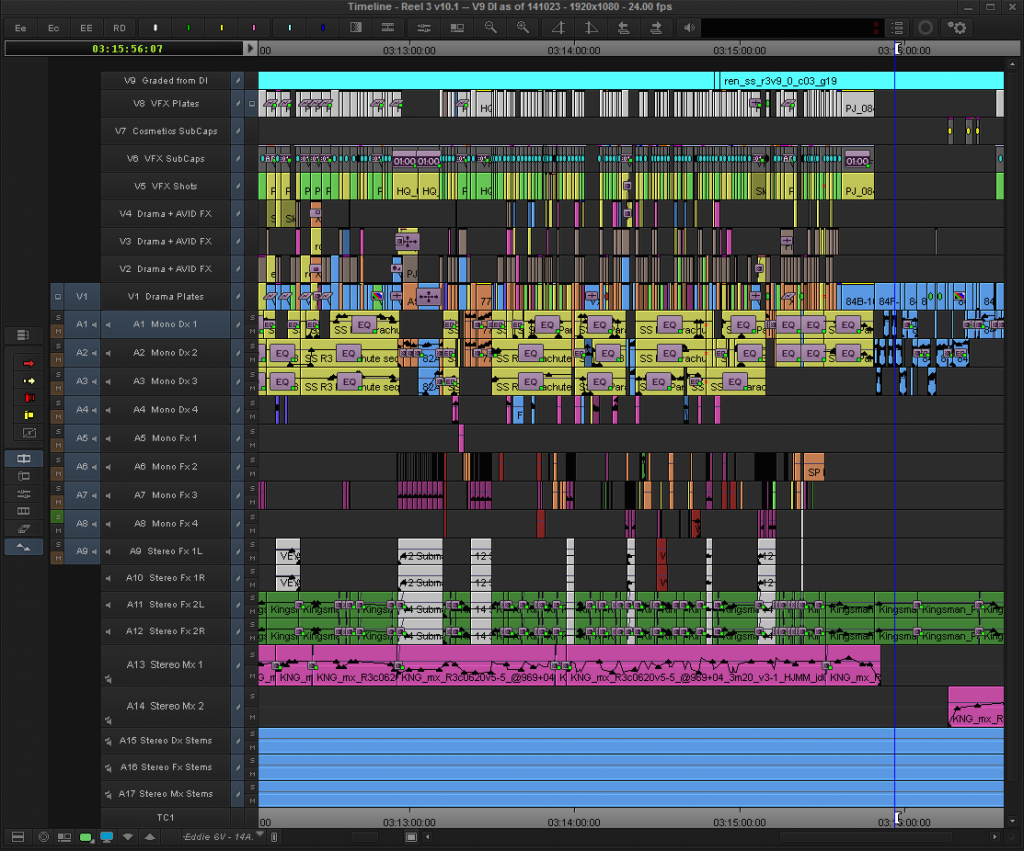 For a better look at all of Hamilton’s timelines, be sure to hit the dropbox download in the tweet at the top of this post. But in this condensed view, you can still see how detailed Hamilton is in naming his tracks, which must be the key to keeping everything organized while editing. Although you’d probably have to ‘tidy as you go,’ rather than trying to do it all at the end.

It’s also interesting to note that Hamilton has four tracks of ‘Drama + Avid FX’ going on in the timeline. I can only assume these involve temporary composites and visual effects shots created by Hamilton to be able to present as finished a cut as possible to the director.

I’m guessing that ‘Video Track 5’ has the finished VFX shots in it, replacing the VFX plates that are disabled and stored in V8. The V6 VFX Subcaps are text titles containing relevant details that are exported for the VFX houses. Evan Schiff has created a free online EDL to SubCap converter here, if that’s any use to editors or assistants reading this. V9 contains the finished graded image from the colorist.

On the sound side, everything from A1 to A14 will have been meticulously created by Hamilton, with A15-A17 containing the final Dialogue, Music and Effects (DME) stems from the sound department.

In this close up of Hamilton’s source monitors, you can see his extensive use of locators, as well as the key metadata that he has on display— including the source file path, Scene and Take, source timecode, and creation date. 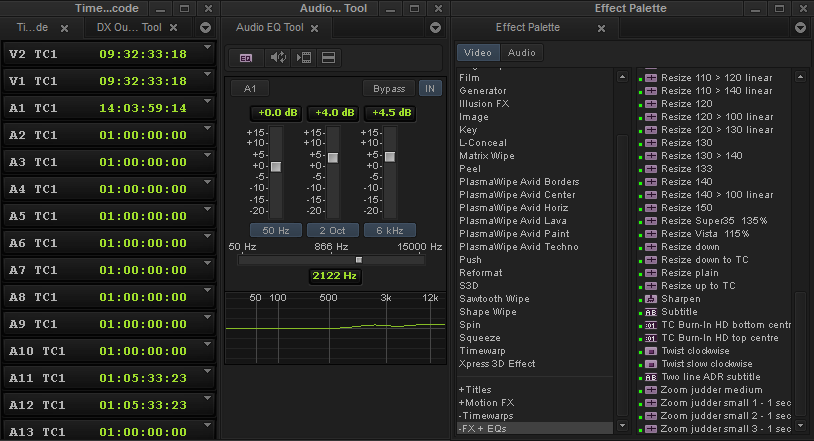 Lastly, this section of Hamilton’s Avid Media Composer workspace has another way to access the same preset tool kit that was available in Screen 1, here FX+EQs, and importantly a bin displaying the source timecode on each track. Again creating a bin like this and bringing it with you is a huge time saver.

So this is what I’ve been able to pick up from a quick look at Eddie Hamilton’s workspace, but I’m sure with some careful inspection there are plenty of other tips and tricks hidden here too. If you spot one, share it in the comments below!