Will Smith is a natural storyteller and world-famous movie star, and now he has a successful YouTube channel. So what can we learn from his team?

Will Smith’s YouTube channel launched in December 2017 and, in just under one year, has amassed nearly 4.2 million subscribers and 150,623,004 views. In this post, I’ll take a look at some of the creative techniques in action on Will’s YouTube channel — and some takeaways for crafting your own successful YouTube series.

There’s a lot of creativity on display in these videos, including strong storytelling, which no doubt comes from the breadth of experience of the creative professionals involved. Since Smith’s channel is a “YouTube originals” show, there is a full suite of professionals behind the scenes.

For example, here are the credits for “How I Became The Fresh Prince of Bel Air | Storytime“:

But even with an impressive crew like this, everything still comes down to just one editor doing the cut and animation — and presumably the mix and grade too. In this case it’s editor Chris Dallas-Feeney, who works for Westbrook Entertainment (a Smith family company) and who previously worked at VICE media.

So let’s take a look at what, exactly, makes this channel so successful.

After watching a few episodes, you begin to notice that there’s an elliptical structure to the show: a premise, exploration, and back to the premise — with a new understanding.

You also notice that the show is trying not to appear like a show, per se; rather it presents the idea that you’re going behind the scenes with the real Will Smith. So there are often little preambles that set up the situation and make it look deliberately unpolished. 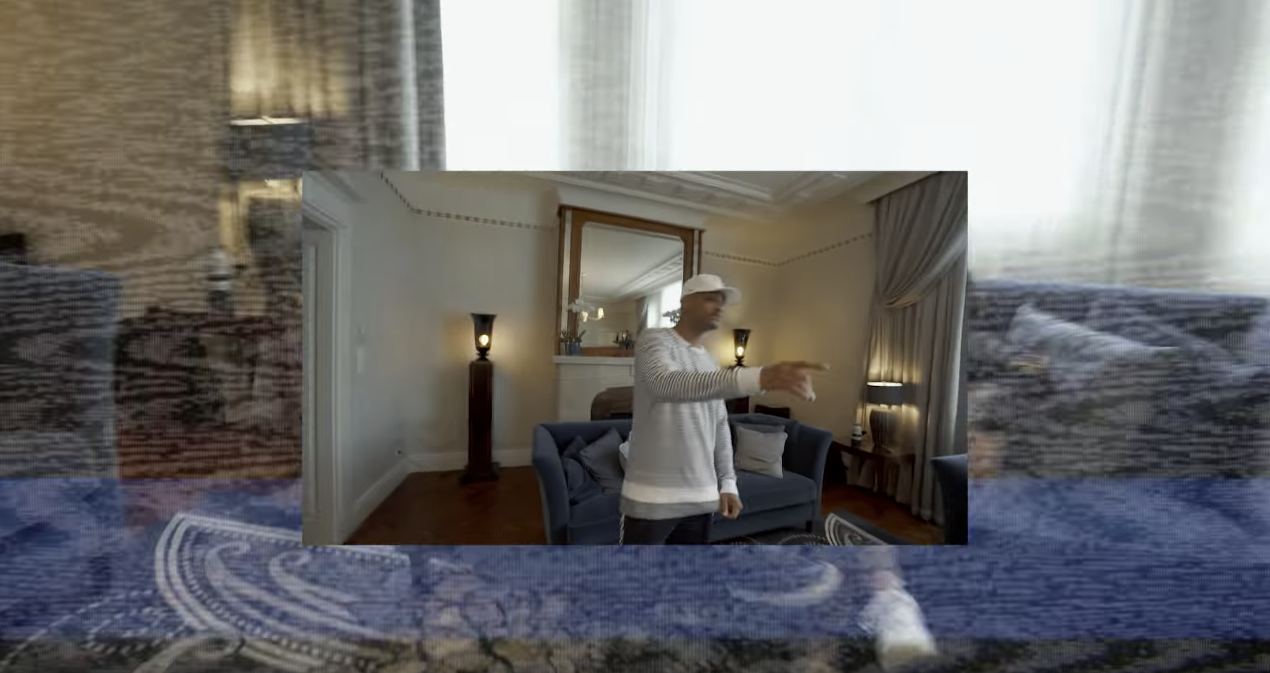 In this screengrab from the opening few seconds of “The Truth About Being Famous,” you can see how they’ve created a picture-in-picture effect with some VHS-style noise for an unpolished, unrehearsed aesthetic — Smith even asks the crew if they’re rolling.

From a cinematographer’s standpoint, each show is usually a combination of a properly filmed, sit-down interview (usually on a static high-end camera) and off-the-cuff reality filming — from Smith or someone else in a handheld style. This is often intercut based on the dialogue, and these interviews are often shot with multiple cameras. In “How I Became The Fresh Prince of Bel-Air | Storytime,” the crew might even be using three cameras.

As with many YouTube shows, the main goal is to hold the viewer’s attention by maintaining the energy throughout with fairly lean storytelling and a brief overall duration. These are some great creative constraints — instead of forcing a standard episode duration, each is only as long as it needs to be.

But I think it’s worth noting, as an editor, that storytelling with a clear beginning, middle, and end is key to making the content engaging and meaningful, and that’s never going to change, no matter what you’re cutting. Structure brings clarity.

The show uses animation to fill most of its visual gaps. More often than not, this is when Smith refers to past events that lack B-roll or archive material. Although this animation is a fairly simple visual style, it’s always spot-on in terms of the emotion or comedic timing — with a little help from some cartoonish sound effects.

The episode “How I Became The Fresh Prince of Bel-Air | Storytime” is entirely illustrated with animation and an interesting reenactment  of a conversation between a young Will Smith and a (now ex-) girlfriend.

Something as simple as dubbing a girlfriend’s voice over a shot of Will (an internet meme) is another creative technique to keep the energy up and make some content stand out from the rest of the episode. 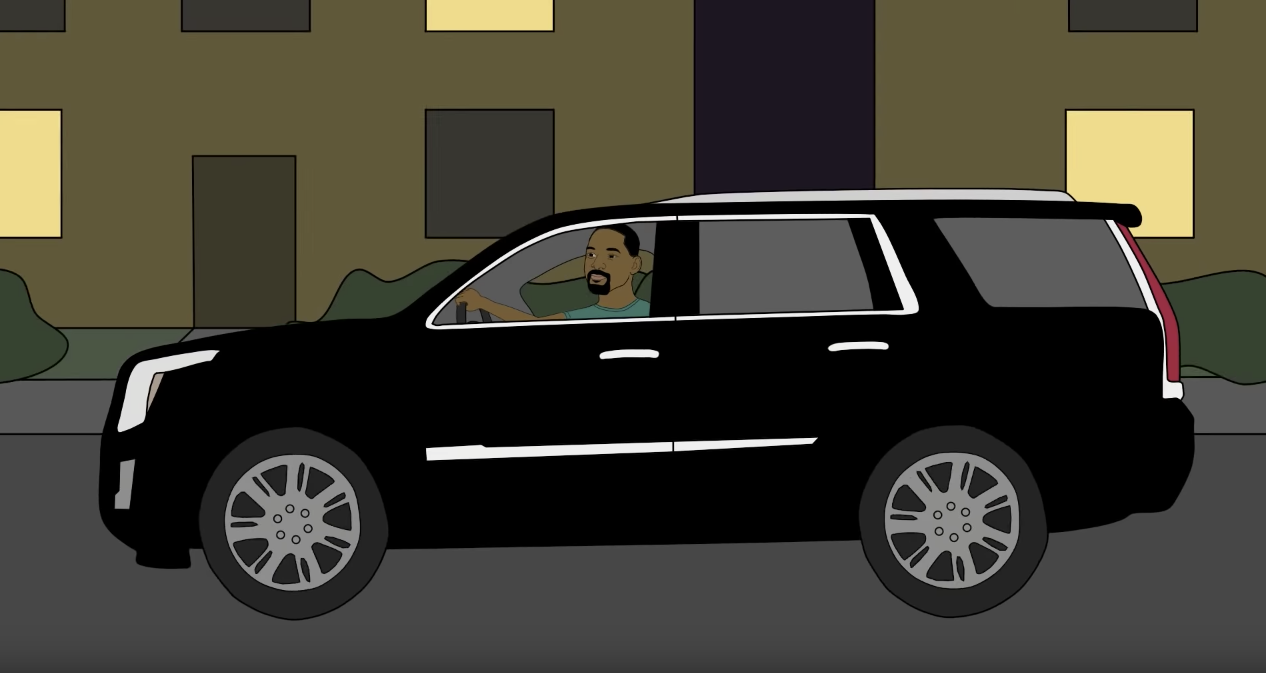 There’s a very simple, flat visual style to the animation, with relatively little movement (which no doubt saves time in post-production), but it is still strong storytelling. This story about Will not having any money for gas sounds like it’s from a chat-show segment since it has a laugh track.

Although animation can be time-consuming, it’s really helps make the show more engaging and entertaining. It’s a good way to add some texture and pacing to your storytelling.

Sound Effects, Music, and the Mix

When you focus only on the sound design, music edit, and mix, there’s actually a lot of subtle things going on.

If you listen to this section of Smith telling the story of how he auditioned at Quincy Jones’s house, you’ll hear simple sound effects for the animation; music breaks at key moments in the story (3.09) and (3.34); and a change in volume and pace between the first, second, and third tracks.

If you listen carefully at 3.34, you’ll hear that even though the music breaks, the editor loops the final sustained note so that it’s never actually fully gone, and then uses a reversed whoosh to ramp up into the third track. This helps to maintain momentum and energy across a pause.

It’s quite a different effect from the complete music break at 4.15, which is one of the few moments of silence in the whole show.

There are also subtle sound effects over some of Will’s actions, such as when he says “We took a picture, signed the contract,” which, again, helps to blend the animation with the footage.

Editor Dallas-Feeney also uses sound effects and visual punch-ins to accentuate certain moments and make them seem much more important than they might otherwise be. For example, listen to the bass-drop when the question at the heart of “The Truth About Being Famous“ is posed.

A successfully created montage can be a powerful editorial tool for cramming a lot of information into a short sequence.

In the opening montage (0.23 – 0.43) from “The Truth About Being Famous,” you get an idea of the size of the adoring crowds that follow someone like Will Smith around. It’s an artful composite of mixing the beat of the music, the sound design of the crowds, specific foley (car tires screeching, punches landing, etc.), Will’s voice-over, and videos and stills.

There are a few glitch effects thrown in for good measure, and clips from Smith’s own films highlight certain key words (fought, struggled) and I particularly like how the tire screech carries over into Smith’s own cheer-and-swinging camera move.

There’s also a really interesting “hyper-montage” at 6.59 in the episode below, after the word “but . . .” It serves as a visual reminder of the stakes and what Will has done to conquer them, and it concludes the piece in the span of only a few seconds.

The same episode also features frequent text pops to highlight the word “Fear” — with some glitch effects to bring them to life. It’s a simple addition, but it helps focus the audience’s attention on the central theme of the video.

To see all of these ideas in action, check out “The Jump,” and try your hand at a few of these techniques in your own videos.

Looking for more on web-based filmmaking? Check out these articles. 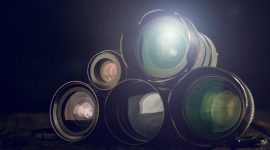 Video Production
Freelance Tip: How Do You Know When to Turn Down a Job?