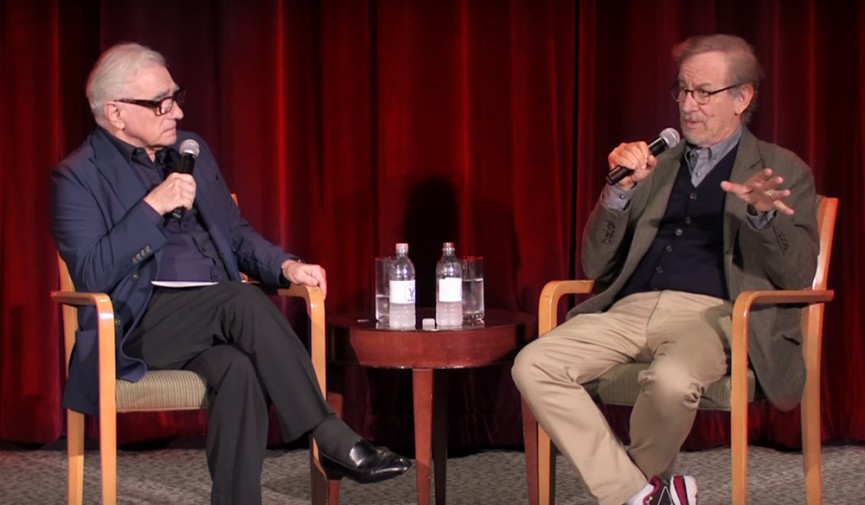 Abrams on Star Wars. Spielberg on Bridge of Spies. Tarantino on The Hateful Eight. Top Hollywood directors sound off in this collection of compelling interviews.

In this thirty-minute interview, Star Wars The Force Awakens screenwriter Lawrence Kasdan chats with J.J. Abrams (who uses some colorful language, just FYI) on the unbelievable pleasure of bringing the film to life. Here’s a quote from Abrams on his approach to honoring the VFX legacy of the original trilogy in a modern VFX era:

For me, a great approach was to say “OK we can do anything – we have the technology to do so, but what should we do? And what would they have done?” And to approach almost everything from a point of a view of what’s the most down and dirty way of doing it, and then how can we use technology as necessary, because of course there are more visual effects shots in this movie, more than any Star Wars movie prior, and amazing visual effects work, but a lot of the CG was to remove things, to remove puppeteers and wires and so on.

I’m not sure you could get two more different directors, as far as their creative output, but in this thirty-minute discussion between directors Christopher Nolan and Quentin Tarantino, you get a sense of just how much they both love cinema in its purest form, and why they both insist on shooting on film, and for Tarantino, in 70mm. As always, Tarantino is energetic and Nolan insightful.

In this hour-long conversation between two of the biggest names in Hollywood, Martin Scorsese chats with Steven Spielberg on the process of making his latest film, Bridge of Spies, starring Spielberg’s favorite actor, Tom Hanks. It’s a rare opportunity to hear these two giants of cinema discussing their craft, and this interview is packed with fascinating inside stories from each of their careers.

That’s the great thing about directing, you can have tremendous respect for the written word, and I do… the written word is everything you, can’t do anything without something on paper. But where you insinuate the camera and where you can sneak the cinema in, on a word-heavy film is a real challenge. — Spielberg

The making of The Revenant would probably make for a decent film in itself, given what the cast and crew endured to bring it to the screen. In this thirty-minute conversation between two very accomplished directors, you get a real sense of Iñárritu’s slightly chaotic and experimental production process that obviously captured some kind of creative magic, alongside Director of Photography Emmanuel Lubezki’s amazing camera work.

When we were shooting, it was terrifying to know that it was a clock-watching precision kind of thing. But to be doing one or two takes a day because it was at the end of the day. The adrenaline was so real, that every day was terrifying knowing that we have rehearsed so much and that was the only hour to get all that we have done. — Iñárritu

Joy is the semi-autobiographical tale of Joy Mangano, who became a self-made millionaire after inventing the Miracle Mop. In this conversation with director Alexander Payne, they talk quite a bit about Russell’s working relationship with Lawrence and the overarching themes of his work.

Actor and Director Bob Balaban chats with director Adam McKay on the process of bringing the complex subject matter of The Big Short to the big screen. It’s a lively discussion with plenty of great anecdotes, including how Christian Bale learned to play drums in just four weeks and with a blown-out knee.

What I responded to with the book was the characters. Once I saw those characters and I was so engaged in them, I knew that was the life blood of the movie. The only drag was having to cut out so many great sequences from the book… there were so many great examples of the twisted hubris of the big banks that I just loved. But I knew from the beginning it had to be about the characters. — McKay

Director Tom McCarthy’s procedural Spotlight looks at the Boston Globe’s uncovering of the Catholic Church’s cover up of child abuse by parish priests. In this thirty-minute Q&A with director Jonathan Levine, you can hear about the entire production process — researching the story’s background, recreating the investigation, and turning it into a script over an extended period. Here’s McCarthy on getting the script together from a wealth of information.

Early on I was committed to this idea of the ensemble, and not conflating the characters… and following the investigation through the team, so we wouldn’t just be following one or two protagonists, but six. And once we made that decision, it unleashed Josh to go and accumulate more information, and we just kept shaping and shaping until we had a really strong outline, and then the writing happened very quickly. We were very aggressive with that, because we felt like all the pieces were in place. Now keep in mind, we re-wrote for another year and a half once we had a draft. But once we cracked the back of the investigation and what we felt the main themes were, we kind of got over the hump, so to speak.

8. Marc Levin Interviews Angelina Jolie Pitt on By The Sea

Director Marc Levin interviews writer/director Angelina Jolie Pitt on her process of writing and directing By The Sea, which stars her husband, Brad Pitt. In this quote from Jolie Pitt, you hear why she chose to cast her husband in the film. Throughout the course of the interview, Levin does a great job of teasing out insights on Angelina’s creative process.

At a certain point as artists, we all get to that place where we want to do the crazy one [it would be crazy to do this script], and we want to not feel safe, and to just play, and maybe we make a mess, but we want to remember what it is to be free. And so we were feeling that, and we wanted to just go out and be together, and work together, and try something, and succeed or fail, we wanted to do something together.

In this conversation between Wash Westmoreland and Carol director Todd Haynes, you can hear quite a bit about the tone and texture of the film, its subject matter, and how a tax break in Ohio helped the filmmakers achieve their period film on a budget. Here’s Haynes on why he chose to cast Rooney Mara as Therese.

Well, I’d been an admirer of Rooney’s work as early as I can remember, and I was interested in how she can underplay even every big characters, like in The Girl With The Dragon Tattoo, and do something unexpected with those roles. And I just thought, wow, she could do something so interesting with this very simple story and very accessible character, a sort of universal character.”

What are your favorite takeaways from these interviews? Let us know in the comments below.