If you are considering jumping into FCPX, then you will want to get schooled up on the real power at the heart of FCPX: Metadata.

The latest version of FCPX is just around the corner, coming hopefully in December. Eagle eyed Alex Gollner, who creates an amazing range of free FCPX plugins, has suggested that the recently updated iMovie that shipped with Mavericks, is actually an unreleased version of FCX 10.1 with a different user interface. He also recently tweeted this good info:

That said there are plenty of great things to be said of the current version of FCPX. Filmmaker and Premiumbeat blogger Noam Kroll recently presented this instructive workflow presentation at LACPUG on his independent feature film edited on FCPX and finished in DaVinci Resolve.

You can read more about Noam’s filmmaking techniques in this post he wrote for PremiumBeat on creating a blockbuster look on a low budget and in this Cinema DNG post production roundup.

Making the most of Metadata in FCPX

Sam Mestman also shared this FCPX workflow presentation at a recent LACPUG meet up, all about leveraging the metadata functionality within FCPX. If you want to do more with Final Cut Pro X then this is a must watch.

For even more FCPX Workflow insights including Sam Mestman’s 3 part series on R3D workflows with FCPX check out this previous post. Another great resource is this step by step guide to media management in FCPX from Sam, from a presentation he gave at a LumaForge training event. One of Sam’s tips is using symlinks so that you can reference the same media from multiple FCPX Events simultaneously.

In short metadata = money. And Final Cut Pro X does it better than any platform out there. – Reuben Evans

Want even more FCPX metadata training? Check out this resource for making the most of metadata in FCPX. In this three part series from Reuben Evans, head of the video team at Logos Bible Software, he shares how his team uses FCPX in a shared work environment to speed up their workflow, saving both time and money.

Final Cut Pro X’s Events are individual databases that store all the media for a particular shoot. They appear simple, like a Final Cut 7 bin. But they are much more than that, and can be a little difficult for even an experienced editor to fully grasp. I want to persuade you that thinking about your footage like data in a database, instead of film in a bin, is the first step toward accelerating your editing with FCPX.

FCPX is Ready For Professionals

If you’ve not yet seen this hour long presentation from post production trainer Larry Jordan at the Amsterdam Supermeet then it too is well worth a watch for a detailed walk through of FCPX, as well as a demonstration of Change List X from Intelligent Assistance. Larry offers some useful philosophical thoughts on why change is necessary.

Lastly, this two part post Philip Johnston from HD Warrior shares his experiences of using FCPX to capture DV footage for a 2 hour dvd and edit in FCPX from a Thunderbolt Pegasus Raid. Across both posts Philip talks through some of the plugins he relies upon to perform regular green screen work as well as it’s integration with Motion 5. 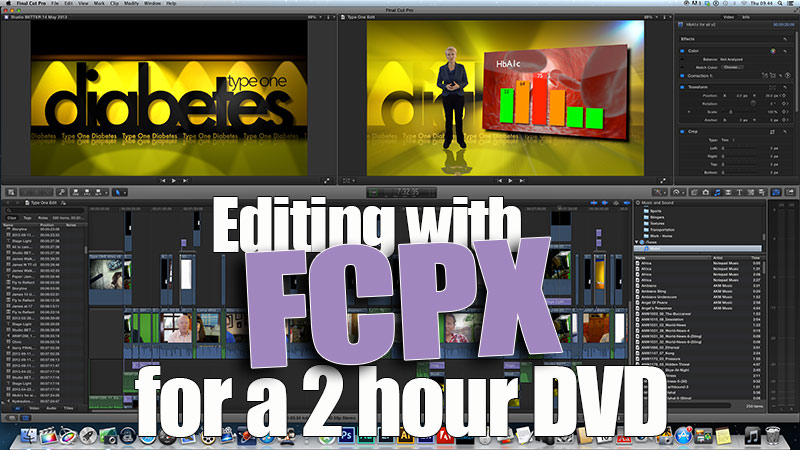 Check out Part 1 and Part 2. In a later post Philip talks through a bug in FCPX that causes the app to seemingly fail to open, due to ‘overly complex timelines’ (although surely you want complex timelines when you’re editing!). If you face the same problem this post will help you solve it.

I know that some people have successfully edited long form media in FCPX on a single timeline but it’s something I would avoid. The best approach is to split it up into smaller timelines and then join them together only when you want to output them. Also try to avoid things that will increase the file size like over-use of compound clips and multiclips.

Whew, was that enough FCPX resources for ya!? Spend some time digging into these FCPX videos and tutorials…and learn how to optimize your video editing with metadata in Final Cut Pro X.

Have your own FCPX resources to share? Let us know in the comments below!